☁ PAN ☁ (@therealpan) Pop Art Portraits of Popular Faces Are Popping Up in Dublin. All images courtesy of the artist, via Those wheatpasted portraits of actors and fictional characters appearing in the streets of Dublin? 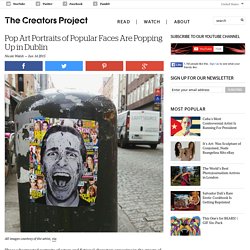 There's a good chance street artist Pan Cooke, f.k.a. Stephen Cooke, is behind them. Cooke, a 24-year-old business graduate from Dublin, never pursued art in school. Instead, he's made a name for himself in and around Ireland’s booming street art with his painting-style depictions of Peter Pan, Jack Nicholson, and more throughout Dublin. It began one afternoon, as he doodled on a bedroom wall. "I began learning about 'wheatpasting' shortly after this," he continues. Cooke then consider applying this technique to stickers. What is a Podcast. What is a Podcast In this article I'm going to explain what a podcast is and why it's becoming such a popular media. 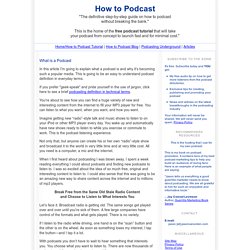 This is going to be an easy to understand podcast definition in everyday terms. What is a Podcast? (Technical Definition) A podcast is a digital audio file (usually MP3 or AAC) made available for download on the internet through an RSS 2.0 feed. A podcast's RSS feed is updated each time a new media file is published. It is the convenience of this subscription model that sets podcasting apart from other audio available on the internet such as streaming and audioblogging. The enclosure tag can be used to any type of digital file, but not all aggregators recognize and download all file types. Podcasting offers a variety of content for listeners to consume how they want, when they want and where they want. Hopefully this definition contained enough big words to make it a sufficiently techie definition of what is podcasting? Halloween Scare Attraction event Grove Gardens in Kells county Meath Ireland. 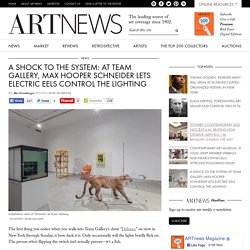 The first thing you notice when you walk into Team Gallery’s show “Dolores,” on view in New York through Sunday, is how dark it is. Only occasionally will the lights briefly flick on. The person who’s flipping the switch isn’t actually person—it’s a fish. For a work called Dielectrix I: Division Electrophorus (2016), Max Hooper Schneider has installed two Electrophorus electricus fish that can turn the lights on and off.

Better known as knifefish, or more incorrectly as electric eels, the fish emit a slight charge that, when it hits metal connected to the gallery’s central system, can flicker the lights. “These eels are so charismatic, and I’m obsessed with them,” Schneider told me by phone from Los Angeles, where he is based. Schneider’s work tends toward dramatic, oddball situations such as this one. For Todd von Ammonn, the curator of “Dolores” and the gallery’s director, the show conjures a post-apocalyptic suburbia. Theatre: The Seagull has landed - with gender-bending twist.

"We didn't announce it as the lesbian Seagull, it's not on the programme. 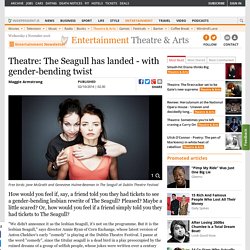 But it is the lesbian Seagull," says director Annie Ryan of Corn Exchange, whose latest version of Anton Chekhov's early "comedy" is playing at the Dublin Theatre Festival. I pause at the word "comedy", since the titular seagull is a dead bird in a play preoccupied by the ruined dreams of a group of selfish people, whose jokes were written over a century ago. Funny or no longer funny, Ryan is producing the very first lesbian Irish Seagull. This feels just right in a year when the major Irish film release, A Date for Mad Mary, is a romance between women; when a wildly camp drag show, Riot, wins Best Production at the Dublin Fringe; a year when we are commemorating forgotten women of the past whose true, inside stories we'll never know.

It happened like this. This time, in order to pack out the Gaiety, they needed a star to play Konstantin, the embattled and love-lorn young playwright. Indo Review.