17 Vintage Ads That Would Really Piss People Off Today. #12 Is Terrifying. “Cocaine godmother” Griselda Blanco gunned down in Colombia. Griselda Blanco, the drug kingpin known for her blood-soaked style of street vengeance during Miami’s “cocaine cowboys” era of the ’70s and ’80s, was shot to death in Medellin by a motorcycle-riding assassin Monday. 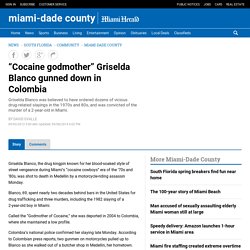 Blanco, 69, spent nearly two decades behind bars in the United States for drug trafficking and three murders, including the 1982 slaying of a 2-year-old boy in Miami. Called the “Godmother of Cocaine,” she was deported in 2004 to Colombia, where she maintained a low profile. Colombia’s national police confirmed her slaying late Monday. According to Colombian press reports, two gunmen on motorcycles pulled up to Blanco as she walked out of a butcher shop in Medellin, her hometown. One man pumped two bullets into her head, according to El Colombiano newspaper. “It’s surprising to all of us that she had not been killed sooner because she made a lot of enemies,” former Miami homicide detective Nelson Andreu, who investigated her, said late Monday. The Total Solar Eclipse In 30 Seconds Seen From From a Plane Over The Faroe Islands..

101 Uses for Coconut Oil - Wellness Mama. Hard To Believe That Tim Tebow Is A Virgin. Eric Goldschein Note: This article is about Tim Tebow. 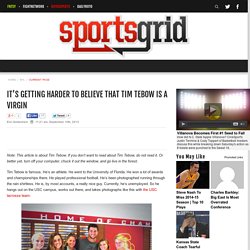 If you don’t want to read about Tim Tebow, do not read it. Or better yet, turn off your computer, chuck it out the window, and go live in the forest. Tim Tebow is famous. He’s an athlete. And we’re supposed to believe this guy doesn’t get laid? Everyone knows Tebow is religious and wants to wait until marriage to get it on. And to top it all off, he’s 26. Tim Tebow is the entire package — if you disregard stuff like winning, which is why Tom Brady is actually the entire package. **End transmission of wondering about Tim Tebow’s sex life** 19 Of The Most Evil Women In History. 19 Of The Most Evil Women In History 19. 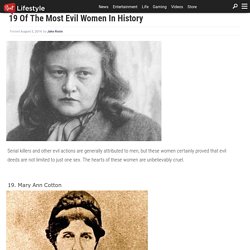 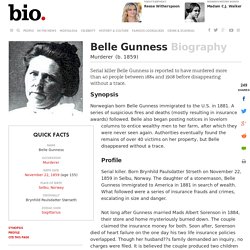 Synopsis Norwegian born Belle Gunness immigrated to the U.S. in 1881. Scientists Discover "Reset Button" For The Body's Biological Clock. Jetting half way across the world, shift work and those crazy all-nighters are all things that can upset our body’s daily cycle, or circadian rhythm. 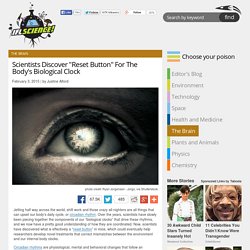 Over the years, scientists have slowly been piecing together the components of our “biological clocks” that drive these rhythms, and we now have a pretty good understanding of how they are coordinated. Now, scientists have discovered what is effectively a “reset button” in mice, which could eventually help researchers develop novel treatments that correct mismatches between the environment and our internal body clocks. Circadian rhythms are physiological, mental and behavioral changes that follow an approximately 24-hour cycle, which are primarily dictated by changes in light in the environment.

It’s been known for some time that this “master clock” is a bundle of neurons in a region called the suprachaismatic nucleus (SCN); however, scientists didn’t know whether altering the way that these cells fire could change how it operates. 13 Kids That Told Their Parents The Weirdest Things About Their Imaginary Friends. Posted Feb 07, by Dominic Trombino A lot of people have imaginary friends when they are younger, and in fact some scientists say having these made up buddies can be good for a kid's development. 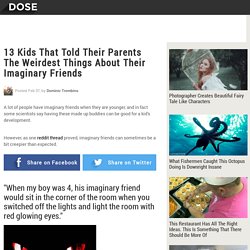 However, as one reddit thread proved, imaginary friends can sometimes be a bit creepier than expected. Share on Facebook Share on Twitter "When my boy was 4, his imaginary friend would sit in the corner of the room when you switched off the lights and light the room with red glowing eyes. " "He said the ghost was called The Captain and was an old white guy with a beard. "Anyway, fast forward two years later, the wife and I are watching the new Amityville (the one with Ryan Reynolds) and our daughter walks out right when dead girl goes all black eyed. "One day she was asleep on the couch while I was watching her, and she woke up and started yelling at her rabbit for no reason.

"My little brother's imaginary friend, Roger, lived under our coffee table. 25% of the people have a 4th cone and see colors as they are ;p.