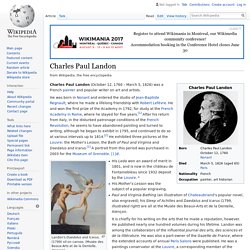 He was born in Nonant and entered the studio of Jean-Baptiste Regnault, where he made a lifelong friendship with Robert Lefèvre. He and won the first prize of the Academy in 1792, for study at the French Academy in Rome, where he stayed for five years.[1] After his return from Italy, in the disturbed patronage conditions of the French Revolution, he seems to have abandoned painting and turned to writing, although he began to exhibit in 1795, and continued to do so at various intervals up to 1814.[2] He exhibited three pictures at the Louvre: the Mother's Lesson, the Bath of Paul and Virginia and Daedalus and Icarus.[1] A portrait from this period was purchased in 2003 for the Museum of Grenoble. [1].

Landon's Daedalus and Icarus, (1799) oil on canvas. (Musée des Beaux-Arts et de la Dentelle, Alençon) Landon Charles. Landon Charles. Landon promoted his correspondence school with advertisements like this one from a 1925 issue of Popular Mechanics. 1904 newspaper illustration by Landon Born in Norwalk, Ohio, Landon worked for The Cleveland Press from 1900 until 1912, managing the art department—and developing new talent—for the last five years of that time. 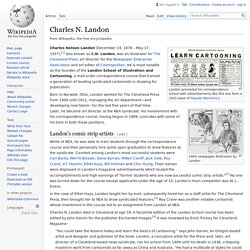