» A History Of The Ancient Civilizations And Modern Empires That Controlled Israel. By Associated Press. 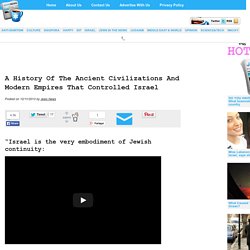 Chinese Civilisation Older Than Thought. New findings have shown that Chinese civilisation may have much older roots than thought. 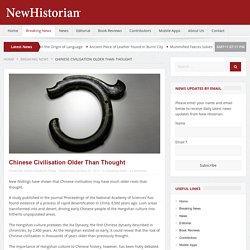 A study published in the journal ‘Proceedings of the National Academy of Sciences’ has found evidence of a process of rapid desertification in China, 6,500 years ago. Lush areas transformed into arid desert, driving early Chinese people of the Hongshan culture into hitherto unpopulated areas. The Hongshan culture predates the Xia Dynasty, the first Chinese dynasty described in chronicles, by 2,400 years. » Ancient 298 Million Year Old Forest Found Beneath Coal Mine in China. Scientists just discovered an incredibly preserved 298-million-year-old forest buried deep beneath a coal mine in Wuda, China. 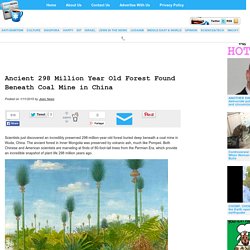 The ancient forest in Inner Mongolia was preserved by volcanic ash, much like Pompeii. Both Chinese and American scientists are marveling at finds of 80-foot-tall trees from the Permian Era, which provide an incredible snapshot of plant life 298 million years ago. Lead by the University of Pennsylvania’s Herman Pfefferkorn, the scientists have been studying the fossilized forest and they published a paper this week in the Proceedings of the National Academy of Scientists. Alcohol archaeology: I recreate beverages with heritage - opinion - 31 December 2014.

Resurrecting ancient beers and wines is a subtle alchemy, but Patrick McGovern knows all the tricks. 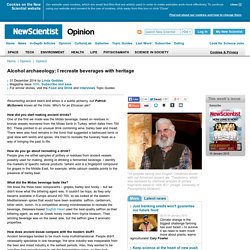 Who's for an Etruscan ale? How did you start making ancient drinks? One of the first we made was the Midas beverage, based on residues in bronze vessels recovered from the Midas tomb in Turkey, which dates from 700 BC. These pointed to an unusual drink combining wine, barley beer and mead. Rare sarcophagus, Egyptian scarab found in Israel. Israeli archaeologists have unearthed a rare sarcophagus featuring a slender face and a scarab ring inscribed with the name of an Egyptian pharaoh, Israel's Antiquities Authority said Wednesday. 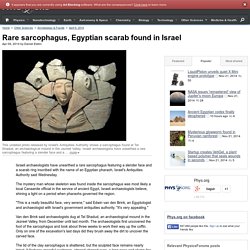 The mystery man whose skeleton was found inside the sarcophagus was most likely a local Canaanite official in the service of ancient Egypt, Israeli archaeologists believe, shining a light on a period when pharaohs governed the region. "This is a really beautiful face, very serene," said Edwin van den Brink, an Egyptologist and archaeologist with Israel's government antiquities authority. "It's very appealing. " Van den Brink said archaeologists dug at Tel Shadud, an archaeological mound in the Jezreel Valley, from December until last month. Over 1,000 Mayan Codices Discovered in Yucatan Ruins. Uxmal| Deep inside the jungle of Mexico’s Yucatan peninsula, near the pre-hispanic city of Uxmal, a team of archeologist from the university of Boston in collaboration with local archeologists from the University of Mexico, have uncovered yet another pyramidal structure estimated to be 1,100 years old. 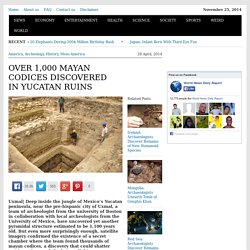 But even more surprisingly enough, satellite imagery confirmed the existence of a secret chamber where the team found thousands of mayan codices, a discovery that could shatter previous views and shed a new light on our understanding of mayan culture and the sudden and tragic destruction of their civilization. Professor Jenny Rothsgard from the research team from Boston was in for a huge surprise when she fell first hand on the codices, which only three copies remain in the world today. Animating the Battles and Mythology of Greek Vases. “Combat,” part of the Ure Discovery series from Panoply animating Greek vases (GIF Hrag Vartanian/Hyperallergic, via YouTube) Greek vases have some of the most lively of ancient art with their flat figures engaged in combat, sports, and epic mythology. 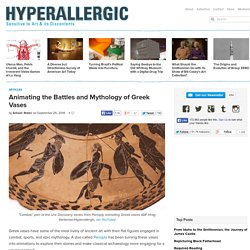 A duo called Panoply has been turning these vases into animations to explore their stories and make classical archaeology more engaging for a younger crowd. Исторические факты, события. Археология.РУ. Главная страница. Статьи » ИСТОРИЯ ДРЕВНЕГО МИРА. Pleiades.stoa.org. Publications from the Center for Archaeoastronomy. 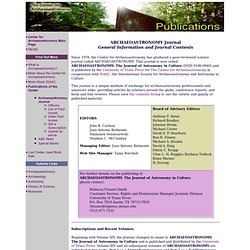 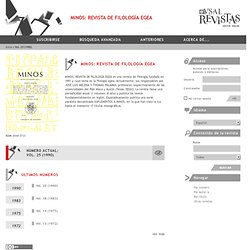