Joy Williams Explains How to Write a Short Story. How to Write a Story a Week: A Day-by-Day Guide. As a fiction writer eager to improve my craft, I’ve long wanted to try out the story-a-week approach recommended to aspiring writers by Ray Bradbury. 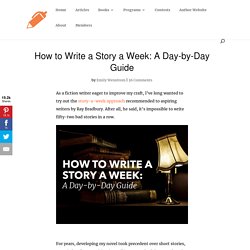 After all, he said, it’s impossible to write fifty-two bad stories in a row. For years, developing my novel took precedent over short stories, as I tried to fit any writing in at all into my schedule around work, family and the rest of life. The 7 Skills You Need To Practice To Become A Successful Writer In The Digital Age. When people see what I've built for myself as a writer, they think it's the result of my degree in creative writing. 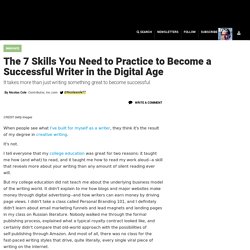 It's not. I tell everyone that my college education was great for two reasons: it taught me how (and what) to read, and it taught me how to read my work aloud--a skill that reveals more about your writing than any amount of silent reading ever will. But my college education did not teach me about the underlying business model of the writing world. It didn't explain to me how blogs and major websites make money through digital advertising--and how writers can earn money by driving page views. I didn't take a class called Personal Branding 101, and I definitely didn't learn about email marketing funnels and lead magnets and landing pages in my class on Russian literature.

I Have Published Thousands Of Articles Over The Past Few Years, Here Are 30 Things I Can Tell You About Being A Writer. I have been working as a professional writer for the past 4.5 years, in everything from finance to entertainment to lifestyle to poetry to news. 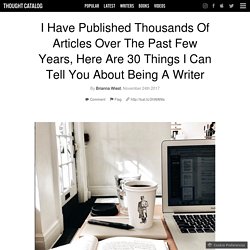 I have hired writers and published other people’s writing. I have done nonprofit copywriting and sponsored content and four books. Some of my articles have 9 million views. Others have 300. These numbers are not always a reflection of the quality of the work itself, rather what is resonating with people at the time. Dostoevsky’s Dazzling Drafts: Windows into a Labyrinthine Writing Process - Russian Faith. Are you a budding writer? 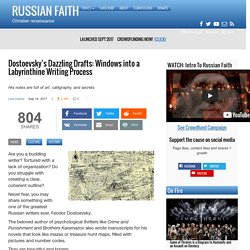 Tortured with a lack of organization? Do you struggle with creating a clear, coherent outline? Never fear, you may share something with one of the greatest Russian writers ever, Feodor Dostoevsky. The beloved author of psychological thrillers like Crime and Punishment and Brothers Karamazov also wrote manuscripts for his novels that look like mazes or treasure hunt maps, filled with pictures and number codes. How the Writer Researches: Annie Proulx. Kazuo Ishiguro: 'Write What You Know' is the Stupidest Thing I've Ever Heard. Kazuo Ishiguro, author of The Remains of the Day, Never Let Me Go, and most recently The Buried Giant, and oh, also our newest Nobel Laureate in Literature, turns 63 today. 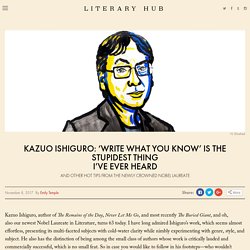 I have long admired Ishiguro’s work, which seems almost effortless, presenting its multi-faceted subjects with cold-water clarity while nimbly experimenting with genre, style, and subject. He also has the distinction of being among the small class of authors whose work is critically lauded and commercially successful, which is no small feat. So in case you would like to follow in his footsteps—who wouldn’t—here’s Ishiguro on his process, what he likes (and hates) to see in literature, and some advice for young writers. Don’t write what you know. “Write about what you know” is the most stupid thing I’ve heard. Examples of Free Verse Poems. Free verse poems will have no set meter, which is the rhythm of the words, no rhyme scheme, or any particular structure. 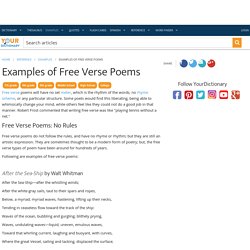 Some poets would find this liberating, being able to whimsically change your mind, while others feel like they could not do a good job in that manner. Robert Frost commented that writing free verse was like "playing tennis without a net. " Ricepaper Magazine. How Kazuo Ishiguro's Writing Won Him the Nobel Prize in Literature – According to Research. Image: Kazuo Ishiguro in 2017. 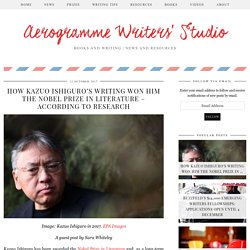 EPA Images A guest post by Sara Whiteley Kazuo Ishiguro has been awarded the Nobel Prize in Literature and, as a long-term scholar and fan of Ishiguro, I feel compelled to join the celebration. The Swedish academy aptly described Ishiguro’s works as possessing “great emotional force” which “uncovered the abyss beneath our illusory sense of connection with the world”. But in an interview posted on the Nobel Prize website, Ishiguro offered a narrower statement of his interest in wordly connections, saying: How to Be Your Own Best Editor - Even If You Don't Have an Editing Bone. Today’s guest post is by Marsh Cassady. 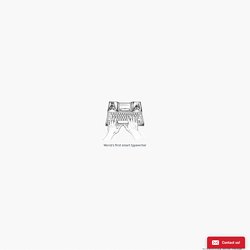 Marsh has Ph.D in theatre and is a former actor, director, and university professor. He is the author of fifty-seven published books and hundreds of shorter pieces. His plays have been performed in Canada, Mexico and the U.S., including Off-Broadway. For about eight years I was co-publisher of a small press and learned quickly what to look for in query letters, proposals, and in fiction and nonfiction. How I Do It: Anne Rice on Writing Technique. Gothic novelist Anne Rice was born and raised in New Orleans, Louisiana. 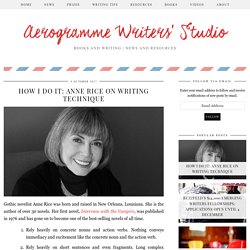 She is the author of over 30 novels. Her first novel, Interview with the Vampire, was published in 1976 and has gone on to become one of the best-selling novels of all time. Rely heavily on concrete nouns and action verbs. Nothing conveys immediacy and excitement like the concrete noun and the action verb.Rely heavily on short sentences and even fragments. Long complex sentences, especially when filled with abstract nouns slow the reader and even confuse him or her.

Writing Advice From Kazuo Ishiguro, Nobel Winner - The Atlantic. It’s tempting to talk of writing—the art of it, the craft of it, the lifestyle of it—as a kind of romance. 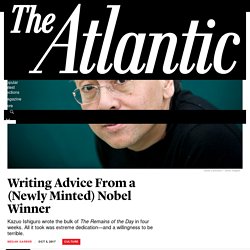 Writers of serious literature (according to, at least, many writers of serious literature) do not simply type stark words onto blank pages; instead, they stare into an abyss and reach into their souls and find, if they are fortunate, the swirling fires of Prometheus. “We write to taste life twice, in the moment and in retrospect,” Anaïs Nin said, which is beautiful and true and also objectively incorrect: Writing is delicious work, but it is for the most part simply work. It’s often lonely.

It’s rarely romantic. (I am not a writer of serious literature, but I am a writer, and I am writing this while sipping stale coffee from a mug that’s in bad need of a wash.) A little bit Draft No. 4 and a little bit The 4-Hour Workweek, Ishiguro’s essay is, just as his fiction, at once spare and revealing. Kazuo Ishiguro: how I wrote The Remains of the Day in four weeks. Many people have to work long hours. When it comes to the writing of novels, however, the consensus seems to be that after four hours or so of continuous writing, diminishing returns set in.

I’d always more or less gone along with this view, but as the summer of 1987 approached I became convinced a drastic approach was needed. Lorna, my wife, agreed. On Flipboard. How Steinbeck Used the Diary as a Tool of Discipline, a Hedge Against Self-Doubt, and a Pacemaker for the Heartbeat of Creative Work. By Maria Popova Many celebrated writers have championed the creative benefits of keeping a diary, but no one has put the diary to more impressive practical use in the creative process than John Steinbeck (February 27, 1902–December 20, 1968).

In the spring of 1938, shortly after performing one of the greatest acts of artistic courage — that of changing one’s mind when a creative project is well underway, as Steinbeck did when he abandoned a book he felt wasn’t living up to his humanistic duty — he embarked on the most intense writing experience of his life. The public fruit of this labor would become the 1939 masterwork The Grapes of Wrath — a title his politically radical wife, Carol Steinbeck, came up with after reading The Battle Hymn of the Republic by Julia Howe. The novel earned Steinbeck the Pulitzer Prize in 1940 and was a cornerstone for his Nobel Prize two decades later, but its private fruit is in many ways at least as important and morally instructive. And in another: Think. The Creative Power of NOT Writing.

In a previous post, I promised to explain why you should “keep your butt on the meditation cushion or your back on the yoga mat” in the early stages of writing. There is power is resisting the urge to write. I learned the value of delayed drafting at a writer’s conference decades ago. One of the conference presenters, Marshall J. Literary Devices: What They Are & a List of the Most Common Examples. Here at The Writers’ Academy we’re always working with writers to help them improve their technique, and understanding how to make proper use of literary devices is a big part of that. 'Fantasy is probably the oldest literary device for talking about reality.' - Ursula K. Bernard MacLaverty: ‘Just try to write. You can do it better tomorrow’ Sometimes I think I am very privileged.

I’m an editor at Random House, but for the last several years I’ve been writing around the edges of my day job: mornings, nights, weekends, wherever I can grab the free time. I began my first novel (which is publishing today) while I was working as an editor, and I credit my job with giving me the courage, and the tools, to tackle writing a book. The truth is that spending one’s life reading good writing—not just reading it, but thinking about what makes it so good—is the best way to teach one’s self how to do it. For some people, this might mean enrolling in an MFA program.

For me, I was lucky enough to learn by observing the other editors around me, and working on manuscripts as they went from rough drafts to finished books. It was the best writing education I could have received. Writing is RevisionThis won’t come as news to anyone, but I can’t stress it enough. When you are writing, you are attempting to communicate an idea to the world. How to Write a Story a Week: A Day-by-Day Guide. Creative Writing Tools. Cookies are Not Accepted - New York Times. 17 Publishers Accepting Unagented Short Story Collections.

How to finish a novel: tracking a book's progress from idea to completion. Albert Einstein's Unique Approach to Thinking. The 30 second habit with a lifelong impact – The Startup – Medium. There are no quick fixes. What Being an Editor Taught Me About Writing. 12 Contemporary Writers on How They Revise. An Illustrated Guide to Writing Scenes and Stories – Electric Literature. A Writer’s Guide to Hacking the Reader’s Brain (in 5 Steps) How to Write Characters That Feel Real. How to Learn to Write by Reading. Submissions (-) – THE AIRGONAUT. The five important elements of a short story. Robert Coover - Wikipedia. What Makes a Winning Short Story? 10 contemporary writers who'll get you hooked on short stories. Stephen King, The Art of Fiction No. 189. Stephen King's Top 20 Rules for Writers.