Zoetrope: All-Story: Back Issue. When I tell our husbands the story of the bad-luck Americans, I begin with Edith because when the Americans came, moving into the airstrip out of town, expanding it with new buildings and sheds and hangars, bringing with them a brass band that practiced in the streets of a Saturday, I thought of the planes that hummed over our newly crowded sky as tiny Ediths with their parrot faces pointed toward the sun. 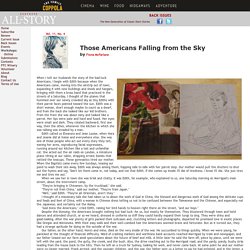 Edith was a short woman, short enough maybe to count as a dwarf, and from the back she looked like our kid brothers. From the front she was about sixty and looked like a parrot. Zoetrope: All-Story: Back Issue. The Size of Things. I knew that Enrique Duvel had inherited a lot of money, and also that, though he was sometimes spotted with women, he still lived with his mother. 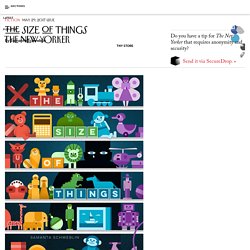 On Sundays, he cruised around the plaza in his convertible, self-absorbed, never looking at or greeting any of his neighbors, and then he’d disappear until the following weekend. I’d kept the toy store I’d inherited from my father, and one day I caught Duvel in the street, peering dubiously in through the display window of my shop. “Buttony” The children wanted to play Buttony.

“All right,” Miss Lewis said, and she clapped her hands five times, in the rhythm that meant they must be quiet and copy her. They were quiet and copied her. The Bath Raymond Carver. Fly Already. P.T. sees him first. 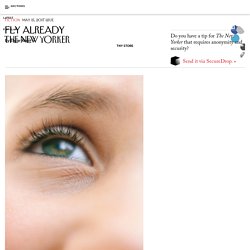 We’re on our way to the park to play ball when he suddenly says, “Daddy, look!” His head is tilted back and he’s squinting hard to see something far above me, and before I can even begin to imagine an alien spaceship or a piano about to fall on our heads my gut tells me that something really bad is happening. But, when I turn to see what P.T. is looking at, all I notice is an ugly, four-story building covered in plaster and dotted with air-conditioners, as if it had some kind of skin disease.

The sun is hanging directly above it, blinding me, and as I’m trying to get a better angle I hear P.T. say, “He wants to fly.” Now I can see a guy in a white button-down shirt standing on the roof railing looking down at me, and, behind me, P.T. whispers, “Is he a superhero?” Signal. I tried to give the children an etiquette lesson while we were waiting at King’s Cross on December 30th. 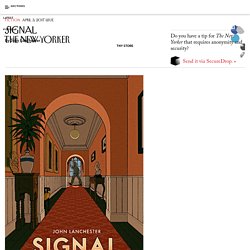 “You aren’t allowed to ask for the Wi-Fi password before you say hello,” I said. “That’s the main thing.” “Uncle Mike won’t care,” said Toby, who was nine. “He’s nice,” said Mia, who was seven. The I.O.U. The above is not my real name—the fellow it belongs to gave me his permission to sign it to this story. 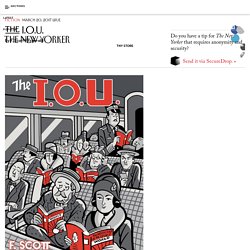 My real name I shall not divulge. I am a publisher. I accept long novels about young love written by old maids in South Dakota, detective stories concerning wealthy clubmen and female apaches with “wide dark eyes,” essays about the menace of this and that and the color of the moon in Tahiti by college professors and other unemployed. I accept no novels by authors under fifteen years old. Sapiens A Brief History of Humankind,Yuval Noah Harari.pdf. Solstice. It was the year’s turning. 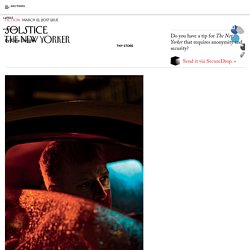 These few hours like the blink of a great eye—just enough light to check that the world is still there, before shutting back down. Sometime in the midafternoon, he had an impulse to go home, or go somewhere, and when he lifted his head, of course, it was dark outside. Samsa in Love. He woke to discover that he had undergone a metamorphosis and become Gregor Samsa. 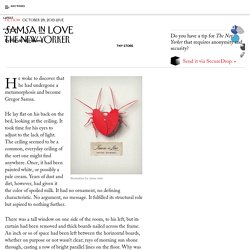 He lay flat on his back on the bed, looking at the ceiling. It took time for his eyes to adjust to the lack of light. The ceiling seemed to be a common, everyday ceiling of the sort one might find anywhere. Once, it had been painted white, or possibly a pale cream. Years of dust and dirt, however, had given it the color of spoiled milk. Free Magic Realism Short Stories and Books. It's that time of year again. 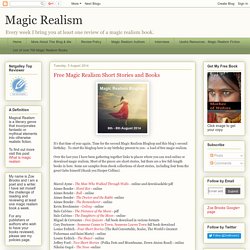 Time for the second Magic Realism Bloghop and this blog's second birthday. To start the bloghop here is my birthday present to you - a load of free magic realism. Over the last year I have been gathering together links to places where you can read online or download magic realism. Most of the pieces are short stories, but there are a few full-length books in here. Some are samples from ebook collections of short stories, including four from the great Gabo himself (thank you Harper Collins). Salman Rushdie · The Prophet’s Hair · LRB 16 April 1981. Early in 19—, when Srinagar was under the spell of a winter so fierce it could crack men’s bones as if they were glass, a young man upon whose cold-pinked skin there lay, like a frost, the unmistakable sheen of wealth was to be seen entering the most wretched and disreputable part of the city, where the houses of wood and corrugated iron seemed perpetually on the verge of losing their balance, and asking in low, grave tones where he might go to engage the services of a dependably professional thief. 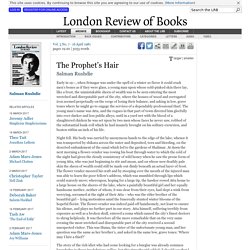 The young man’s name was Atta, and the rogues in that part of town directed him gleefully into ever-darker and less public alleys, until in a yard wet with the blood of a slaughtered chicken he was set upon by two men whose faces he never saw, robbed of the substantial bank-roll which he had insanely brought on his solitary excursion, and beaten within an inch of his life. Night fell. Breakfast ended; the family wished each other a fulfilling day.

The Shelter of the World. At dawn the haunting sandstone palaces of the new “victory city” of Akbar the Great looked as if they were made of red smoke. Most cities start giving the impression of being eternal almost as soon as they are born, but Sikri would always look like a mirage. As the sun rose to its zenith, the great bludgeon of the day’s heat pounded the flagstones, deafening human ears to all sounds, making the air quiver like a frightened blackbuck, and weakening the border between sanity and delirium, between what was fanciful and what was real. Even the Emperor succumbed to fantasy. “In the South” The day that Junior fell down began like any other day: the explosion of heat rippling the air, the trumpeting sunlight, the traffic’s tidal surges, the prayer chants in the distance, the cheap film music rising from the floor below, the loud pelvic thrusts of an “item number” dancing across a neighbor’s TV, a child’s cry, a mother’s rebuke, unexplained laughter, scarlet expectorations, bicycles, the newly plaited hair of schoolgirls, the smell of strong sweet coffee, a green wing flashing in a tree.

Senior and Junior, two very old men, opened their eyes in their bedrooms on the fourth floor of a sea-green building on a leafy lane, just out of sight of Elliot’s Beach, where, that evening, the young would congregate, as they always did, to perform the rites of youth, not far from the village of the fisherfolk, who had no time for such frivolity.

The poor were puritans by night and day. As for the old, they had rites of their own and did not need to wait for evening. “No!” Junior said. If the Impressionists had been dentists by Woody Allen, 1978 - La Reine de Rien. Dear Theo Will life never treat me decently? I am wracked by despair! My head is pounding. Mrs Sol Schwimmer is suing me because I made her bridge as I felt it and not to fit her ridiculous mouth. That's right! Woody Allen: Count Dracula. Somewhere in Transylvania, Dracula the monster is sleeping in his coffin, waiting for night to fall. As exposure to the sun's rays would surely cause him to perish, he stays protected in the satin-lined chamber bearing his family name in silver. Then the moment of darkness comes, and through some miraculous instinct the fiend emerges from the safety of his hiding place and, assuming the hideous forms of the bat or the wolf, he prowls the countryside, drinking the blood of his victims.

Finally, before the first rays of his archenemy, the Sun, announce a new day, he hurries back to the safety of his hidden coffin and sleeps, as the cycle begins anew. Now he starts to stir. The fluttering of his eyelids are a response to some age-old, unexplainable instinct that the sun is nearly down and his time is near. The Kugelmass Episode - Side Effects. The Kugelmass Episode KUGELMASS, A PROFESSOR of humanities at City College, was unhappily married for the second time. Daphne Kugelmass was an oaf. He also had two dull sons by his first wife, Flo, and was up to his neck in alimony and child support.

Mr Biggs and the boychick. Www.angelfire.com/blog2/endovelico/WoodyAllen-GettingEven.txt. Tails of Manhattan. The Whore of Mensa. "Ah Love! Ah Me!" by Max Steele, Collier's Weekly, Saturday, November 3rd, 1945 - UNZ.org. Max Steele (Author of The Cat and the Coffee Drinkers) Science fiction. Fantasy. The universe. And related subjects. A Very Old Man with Enormous Wings pdf. 'The Harvest' by Amy Hempel — Pif Magazine. Today Will Be A Quiet Day. In the cemetery where al jolson is buried. Center of the Universe. Constructed Worlds. Chairman Spaceman. Paul McVeigh. Of Windows and Doors The New Yorker. Chairman Spaceman The New Yorker. Read 15 Amazing Works Of Fiction In Less Than 30 Minutes.

SIMON RICH: SCARED STRAIGHT (short Story) Sorry Dan, But It’s No Longer Necessary for a Human to Serve as CEO of This Company. - McSweeney’s Internet Tendency. Flash Fiction. And of Clay Are We Created Holt. Alice Munro: Dimension. The Book of Simon. Simon Rich. Hilarious jokes by Simon Rich: the funniest man we know. The Life Story of a Condom. Premium Harmony. Herman Wouk Is Still Alive - Stephen King.

Woody Allen: Count Dracula. If the Impressionists had been dentists by Woody Allen, 1978 - La Reine de Rien. Liu the man who ended history. "For Want of a Nail" is a Hugo nominee! - Mary Robinette Kowal. The Kugelmass Episode - Side Effects. SIMON RICH: SCARED STRAIGHT (short Story) Gaiman, Neil Smoke and Mirrors (v1 html) Coover, Robert A Night at the Movies (css) v3.0. Hilarious jokes by Simon Rich: the funniest man we know. White-Bread Jesus, by Robert Coover. Coover babysitter. “Invasion of the Martians” Nighttime of the City - A Short Story by Robert Coover. EP345: The Paper Menagerie. Stories of Your Life and Others. Down to a Sunless Sea by Neil Gaiman. The Frog Prince. Mono no aware by Ken Liu. Fiction: The Lifecycle of Software Objects by Ted Chiang. Io9.gizmodo. The Bookmaking Habits of Select Species. The Book Of Strange New Things - Wikipedia.