MAGICAL MYSTERY TOUR: The Art of Sonya Kelliher-Combs. Museum of contemporary craft : exhibitions : 6765. Organized by The Craft & Folk Art Museum (CAFAM) in collaboration with the Anchorage Museum, This Is Not A Silent Movie: Four Contemporary Alaska Native Artists is centered around four acclaimed Alaska Native artists whose groundbreaking contemporary works question institutional methods of identifying Native heritage, examine their own mixed-race identities, and challenge perceptions and stereotypes about indigenous peoples. 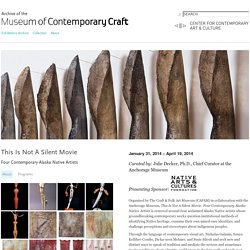 Through the language of contemporary visual art, Nicholas Galanin, Sonya Kelliher-Combs, Da-ka-xeen Mehner, and Susie Silook and seek new and distinct ways to speak of tradition and mediate the serious and sometimes ironic conditions of art, identity, and history in the late 20th and early 21st century. Though each artist’s work is rooted in a lifelong immersion in their respective Alaska Native craft traditions, their multi-media installations dissolve the boundaries between contemporary and traditional arts. New California Law Could Jeopardize Alaska’s Ivory Market. Nome, Alaska — The ivory market in America just got a lot smaller, or at least that’s how it seems. 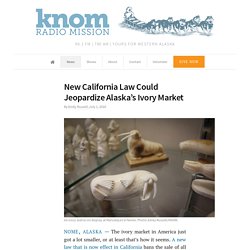 A new law that is now effect in California bans the sale of all ivory products, including walrus ivory. Alaska Natives are protected under a federal law, but confusion and inconsistency between state and federal legislation has many concerned. Abraham Nastapoka. Eagle and breaching whale. Alaska Native Artists Showcase Compelling Work In 'This Is Not A Silent Movie' . Arts & Life. Tsu Heidei Shugaxtutaan pt.1, Nicholas Galanin 2007. 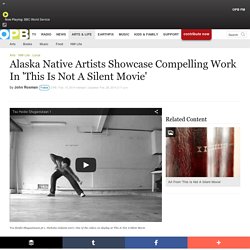 One of the videos on display at This Is Not A Silent Movie The work of four contemporary Alaska native artists is on display at the Museum of Contemporary Craft through April. The collection, This Is Not a Silent Movie, is curated by Julie Decker and blurs the lines of tradition and modernity. The work, ranging from photographs to mixed-media installation, tackles difficult subjects like sexual assault, suicide, loss of language and Hollywood’s portrayal of Native Americans. Susie Silook — United States Artists. Anchorage Daily News - Art of Outrage by Mike Dunham. This article from Anchorage Daily News Art of outrageNative rape victim finds self-expression and healing in mixed mediaBy Mike DunhamAnchorage Daily NewsIf someone hadn't raped artist Susie Silook, Grant Hall might stand empty tonight. 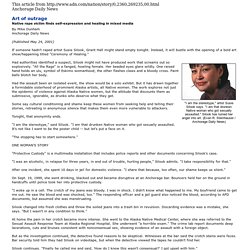 Instead, it will bustle with the opening of a bold art show/happening titled "Ceremony of Healing. " Had authorities identified a suspect, Silook might not have produced work that screams out so explosively. "All the Rage" is a fanged, howling female. Her beaded eyes glare wildly. Contemporary art exhibition explores what it means to be Alaska Native today. ‘Our Story’ is on view Nov. 20, 2015 through Sept. 11, 2016, at the Anchorage Museum Anchorage Museum Published: Susie Silook, Keeping My Head, 2007, ivory, baleen ANCHORAGE, Alaska – “Our Story,” a new exhibition opening Friday, Nov. 20, at the Anchorage Museum, features work by Alaska Native artists who blend traditional and contemporary techniques to explore place and culture through multiple viewpoints. 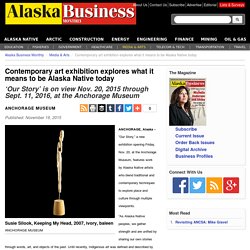 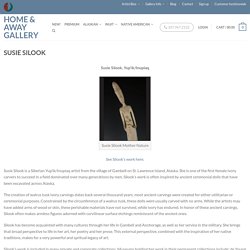 Susie Silook is a Siberian Yup’ik/Inupiaq artist from the village of Gambell on St. WORK: Sedna with Mask by Susie Silook. The New Year presents a much-needed opportunity for reflection and renewal. 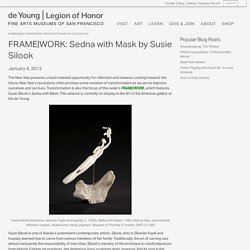 Looking towards the future, New Year’s resolutions often promise some variation of transformation as we aim to improve ourselves and our lives. Transformation is also the focus of this week’s FRAME|WORK, which features Susie Silook’s Sedna with Mask. Golgonooza: Shape shifting in the gallery. Swedenborg is often feted by his followers as a scientific genius whose findings anticipated any number of new discoveries in the many areas of his interest. 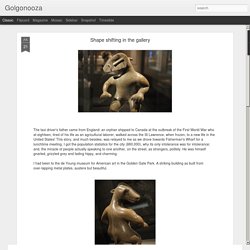 Turning visionary, it is implied, he carried this genius with him and, thus, must be taken equally seriously as a prophet of a New Jerusalem. Lars Bergquist patient, clearly constructed, if a touch pedestrian, biography is a sobering response to such breathlessness that, however, does not leave Swedenborg anything less than a remarkable figure. As a scientist, Swedenborg was a highly gifted synthesiser of current knowledge always with a speculative twist towards questions as yet unanswered. This Is Not A Silent Movie: Four Contemporary Alaska Native Artists. An exhibition centered around four acclaimed Alaska Native artists whose groundbreaking contemporary works question institutional methods of identifying Native heritage, examine their own mixed-race identities, and challenge perceptions and stereotypes about indigenous peoples. 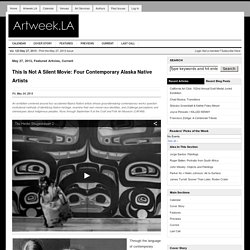 Runs through September 8 at the Craft and Folk Art Museum (CAFAM). Through the language of contemporary visual art, Sonya Kelliher-Combs, Susie Silook, Da-ka-xeen Mehner, and Nicholas Galanin seek new and distinct ways to speak of tradition and mediate the serious and sometimes ironic conditions of art, identity, and history in the late 20th and early 21st century.