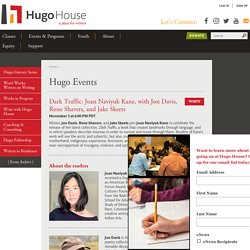 Readers of Kane’s work will see the arctic and subarctic, but also, more broadly, America, and the exigencies of motherhood, indigenous experience, feminism, and climate crises alongside the near-necropastoral of misogyny, violence, and systemic failures. About the readers oan Naviyuk Kane’s most recent book is Dark Traffic. She has received a Guggenheim Fellowship, a Whiting Writer’s Award, an American Book Award, the United States Artists Creative Vision Award, the Donald Hall Prize, the Native Arts and Cultures Foundation National Artist Fellowship, and fellowships from the Radcliffe Institute, the Rasmuson Foundation, the School for Advanced Research, and Brown’s Center for the Study of Ethnicity and Race. 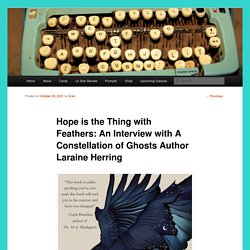 She goes deep. China Martens has called her “a surrealist Anne Rice.” The Paris Review - The Most Misread Poem in America. Hanging Out With Joan Didion: What I Learned About Writing From an American Master ‹ Literary Hub. I arranged to meet Joan Didion in 1971 after reading Slouching Toward Bethlehem. 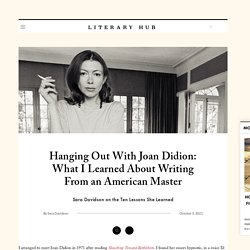 I found her essays hypnotic, in a voice I’d never heard, expressing ideas I knew were true but couldn’t have articulated. I was reporting for several magazines and asked a colleague who’d met her to introduce us. He gave me her number and when I was in LA, I took a deep breath, dialed it, and her husband, John Gregory Dunne, picked up the phone. I asked for Joan Didion. “Who’s calling?” Quand la poésie facilite l'apprentissage des sciences. 12 poignant poems (and one bizarre limerick) written by physicists about physics. Victorian scientists' poetry: An anthology. La méthode de Benjamin Franklin : Comment (réellement) apprendre à écrire. 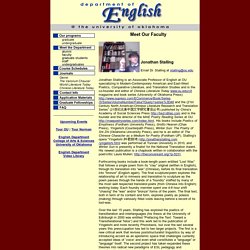 Anna Urli-Vernenghi. Four Poems - Asymptote. David Pearson. Voluntary. Synopsis From an abandoned rowing boat in Estonia full of wild flowers to a swimming pool in the Congo full of drowned insects, Adam Thorpe's new collection takes us on a wide-ranging journey through states of gain and loss, alienation and belonging. 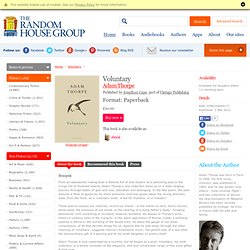 In the title poem, the poet disturbs a flock of geese by his mere presence, and one goose takes the wrong direction, away from the flock, as a 'voluntary exile'. Profit and Loss. Synopsis Celebrated as an unusually original poet - nervy, refreshing, deceptively simple - Leontia Flynn has quickly developed into a writer of assured technical complexity and a startling acuity of perception. 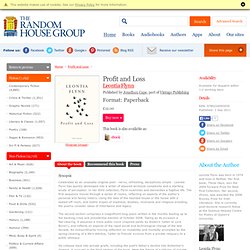 In her third collection, Flynn examines and dismantles a fugitive life. Poetry Archives - Page 3 of 32 - VidLit. In September 1935, after completing high school, Gwendolyn went directly to the new Woodrow Wilson Junior College, which had just opened its doors at Sixty-Eighth and Wentworth. 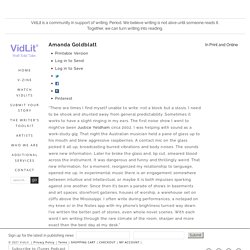 She would graduate in 1936. While at Wilson, Gwendolyn enjoyed friendships, worked hard at her studies, and wrote regularly. Poetry Foundation. Robert Lowell is best known for his volume Life Studies, but his true greatness as an American poet lies in the astonishing variety of his work. 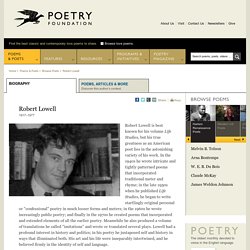 In the 1940s he wrote intricate and tightly patterned poems that incorporated traditional meter and rhyme; in the late 1950s when he published Life Studies, he began to write startlingly original personal or "confessional" poetry in much looser forms and meters; in the 1960s he wrote increasingly public poetry; and finally in the 1970s he created poems that incorporated and extended elements of all the earlier poetry. Meanwhile he also produced a volume of translations he called "imitations" and wrote or translated several plays. Lowell had a profound interest in history and politics; in his poetry he juxtaposed self and history in ways that illuminated both.

Laura Nyro, genius singer-songwriter – WalkerWords. I only properly listened to the songs of Laura Nyro (pronounced ‘Near-oh’, as in Robert De Niro) a couple of months ago, but she already has a special place in my heart. 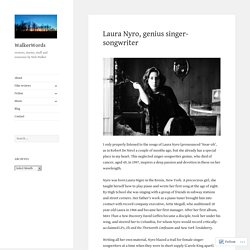 This neglected singer-songwriter genius, who died of cancer, aged 49, in 1997, inspires a deep passion and devotion in those on her wavelength. Nyro was born Laura Nigro in the Bronx, New York. Francesca Woodman. The Land of Altered Bodies. The dream where I’m leglessisn’t a nightmare, and I’m notafraid — there’s light and a riverand everything is exactlyhow I’d hoped. 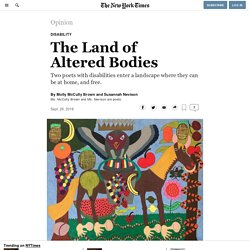 I’m not tetheredto the earth. I’m not tied downby gravity, dragging my legsalong the bank gravel, not searchingfor the softest patch of moss.I’m not even tired, and thoughI’m certain the dreamis an elegy, it sounds exactly likea praise song. In the dreammy legs break free of meand I watch them float away.The coffin in my chestblows open in the wind,and for once I think I knowwhat it’s like to be withoutall our dead and heavy things. Le Black Mountain College, il était une fois une utopie culturelle.

Knopf, 1994, ISBN 978-0-679-43580-8; Alfred A. Knopf, 1996, ISBN 978-0-679-76584-4What Work Is, Knopf, 1992, ISBN 978-0-679-74058-2New Selected Poems, Knopf, 1991, ISBN 978-0-679-40165-0A Walk With Tom Jefferson, A.A. The Bread of Time (1994) Off the Map: Selected Poems of Gloria Fuertes, edited and translated with Ada Long (1984)Tarumba: The Selected Poems of Jaime Sabines, edited and translated with Ernesto Trejo (1979) (Poètes) Robert Kelly (Poezibao) World Poetry Day: 28 of poetry's most powerful lines ever written. The rhythm of the tongue brings wordless music into the air; it is in poetry that the human essence is refined to such ritualistic purity. It's in the steady beats, the sonorous rise-and-fall of speech; for a moment it appears as if all the mysteries of the world have unlocked themselves to our private view. It's these works which are celebrated on World Poetry Day, falling on 21 March, in which UNESCO recognises the moving spirit of poetry and its transformative effect on culture.

In honour of these celebrations, here stands a small collection of singular lines, stanzas, and notions possessing of a power which springs the most moving of thoughts and feelings off of the page and into the humming imagination of its readers. Because I could not stop for Death, / He kindly stopped for me; / The carriage held but just ourselves / And Immortality 'Because I could not stop for Death', Emily Dickinson. Poetry - This Recording. The Cat’s Just Fine He Never Left by Will Hubbard It is true, as Charles Simic says at the beginning of his review of The Collected Poems of Robert Creeley, that publishers’ recent affinity for printing elegantly bound, thousand-page editions of a single 20th century poet could make for some tedious reads.

Perhaps it all began with Donald Allen’s brilliantly edited Collected Poems of Frank O’Hara, which at 560 pages still managed to garner the National Book Award for 1972. Andrew Zawacki. Bitches: Chinah Blac, Esperanza Spalding: Amazon.fr: Musique. Agostini. Conversation with Phillis Wheatley #2 by Tiana Clark. Portrayal: A Double Portrait. Four poems by Orlando White. Nomadics — Meanderings & mawqifs of poetry, poetics, translations y mas. Travelogue too. POOR JOHN Kerry. This week he emitted a sound that was more expressive than pages of diplomatic babble.In his testimony before the Senate Foreign Relations committee he explained how the actions of the Israeli government had torpedoed the “peace process”. They broke their obligation to release Palestinian prisoners, and at the same time announced the enlargement of more settlements in East Jerusalem. The peace efforts went “poof”. “Poof” is the sound of air escaping a balloon. Forrest Gander Recommended Readings. L'esprit du moment... À bientôt alors, (Leiter)