Defining global constant in C++ Ubuntu - Where can I find the include files for MySQL on Linux? - Server Fault. In C, how do you use libcurl to read a HTTP response into a string? Invalid conversion from 'char' to 'char* Jan 20, 2014 at 4:48pm Jan 20, 2014 at 3:48pm UTC Dear guru, The simplified code below works correctly. 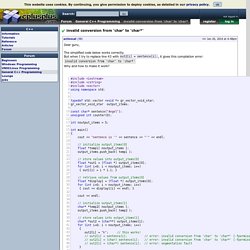 C++ - invalid conversion from `void*' to `char*' when using malloc? C++ - how to pass data to running thread. Command line options · Everything curl. C++ - Sleep for milliseconds. What is the proper #include for the function 'sleep' in C? String - concatenate char array in C. Libcurl - API. Read the libcurl tutorial to get a general in-depth grip of what libcurl programming is all about. 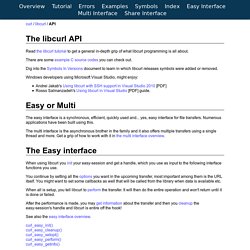 There are some example C source codes you can check out. Dig into the Symbols In Versions document to learn in which libcurl releases symbols were added or removed. Windows developers using Microsoft Visual Studio, might enjoy: The easy interface is a synchronous, efficient, quickly used and... yes, easy interface for file transfers. Numerous applications have been built using this. C++ - Sleep for milliseconds.