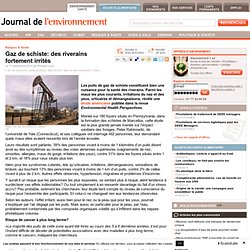 Fracking - you are not important. The fracking agenda in Britain is forging ahead because - in the corridors of power - no one 'officially' sees, hears or speaks anything to the contrary. 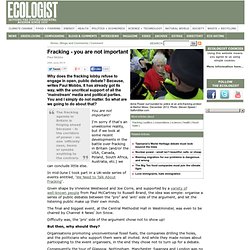 You are not important! I'm sorry if that's an unwelcome reality, but if we look at some recent developments in the battle over fracking in Britain (and/or the USA, Canada, Poland, South Africa, Australia, etc.) we can conclude little else. In mid-June I took part in a UK-wide series of events entitled, 'We Need to Talk About Fracking'. Exxon CEO seeks to halt fracking project in 'his backyard' - News in Brief. This type of dysfunctional regulation is holding back the American economic recovery, growth and global competitiveness. 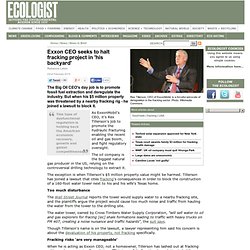 As ExxonMobil's CEO, it's Rex Tillerson's job to promote the hydraulic fracturing enabling the recent oil and gas boom, and fight regulatory oversight. The oil company is the biggest natural gas producer in the US, relying on the controversial drilling technology to extract it. The exception is when Tillerson's $5 million property value might be harmed. Tillerson has joined a lawsuit that cites fracking's consequences in order to block the construction of a 160-foot water tower next to his and his wife's Texas home.

Too much disturbance The Wall Street Journal reports the tower would supply water to a nearby fracking site, and the plaintiffs argue the project would cause too much noise and traffic from hauling the water from the tower to the drilling site. En Europe, pas de miracle économique à attendre des gaz de schiste. Natural Gas Is Not Going to Save the World. Replacing coal gives you other benefits as well, such as reducing the sulfate pollution that causes acid rain, particulate emissions that cause lung disease, and mercury that causes brain damage. 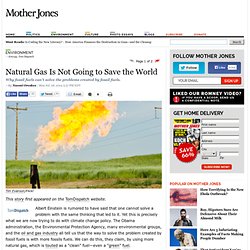 And if less coal is mined, then occupational death and disease can be reduced in coal miners and the destruction caused by damaging forms of mining, including the removal, in some parts of the country, of entire mountains can be reduced or halted. Those are significant benefits. In part for these reasons, the Obama administration has made natural gas development a centerpiece of its energy policy, and environmental groups, including the Environmental Defense Fund, have supported the increased use of gas. President Obama has gone as far as to endorse fracking—the controversial method of extracting natural gas from low permeability shales—on the grounds that the gas extracted can provide "a bridge" to a low carbon future and help fight climate change. What's fueling the fracking boom? Debt. Major oil and gas companies are taking on an increasing share of debt in order to maintain drilling momentum, according to data from the US Energy Information Administration. 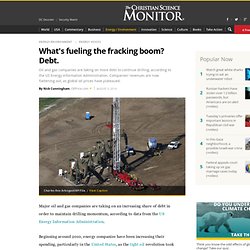 Beginning around 2010, energy companies have been increasing their spending, particularly in the United States, as the tight oil revolution took off. Major firms snatched up acreage in oil-rich shale formations like the Bakken and the Eagle Ford and began drilling at a frenzied pace. The significant outlays required to ramp up such an operation were offset by the rising price of oil, which allowed oil companies to expand their operations without having to take on substantial volumes of debt.

But after several years of increases, global oil prices began to plateau in mid-2011 and have stayed relatively steady since then. In fact, 2013 experienced the least oil price volatility since 2006. For shale drillers in particular, debt has doubled over the last four years while revenues grew at a meager 5.6 percent. Fracking Across the United States. North Dakota's Landscape Energized [Photos]

WILLISTON, N.D. – In the spring of 1805 Lewis and Clark and their expedition paddled up the Missouri River's middle valley, terra incognita to Americans then and still largely unknown to Americans today. 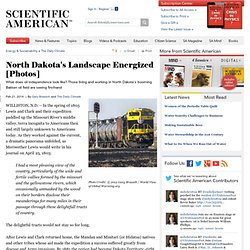 As they worked against the current, a dramatic panorama unfolded, as Meriwether Lewis would write in his journal on April 25, 1805: I had a most pleasing view of the country, perticularly of the wide and fertile vallies formed by the missouri and the yellowstone rivers, which occasionally unmasked by the wood on their borders disclose their meanderings for many miles in their passage through these delightfull tracts of country. The delightful tracts would not stay so for long. After Lewis and Clark returned home, the Mandan and Minitari (or Hidatsa) natives and other tribes whose aid made the expedition a success suffered greatly from disease and Army invasions. The Corps of Engineers blocked the Missouri with the Garrison Dam in 1952, inundating the valley Lewis and Clark had paddled. Welcome to 'frackland': does a river have the right not to be polluted? 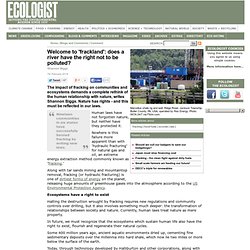 Human laws have not forgotten nature, but neither have they protected it. Nowhere is this failure more apparent than with 'hydraulic fracturing' for natural gas and oil, an extreme energy extraction method commonly known as 'fracking.' Along with tar sands mining and mountaintop removal, fracking (or hydraulic fracturing) is one of dirtiest forms of energy on the planet, releasing huge amounts of greenhouse gases into the atmosphere according to the US Environmental Protection Agency. Ecosystems have a right to exist Halting the destruction wrought by fracking requires new regulations and community controls over drilling, but it also involves something much deeper: the transformation of relationships between society and nature.

In Fracking Fight, How to Measure Health Threats? There are more than 6,000 active gas wells in Pennsylvania. 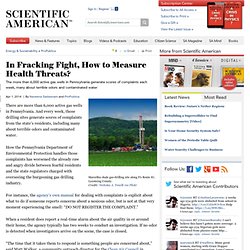 And every week, those drilling sites generate scores of complaints from the state’s residents, including many about terrible odors and contaminated water. How the Pennsylvania Department of Environmental Protection handles those complaints has worsened the already raw and angry divide between fearful residents and the state regulators charged with overseeing the burgeoning gas drilling industry. For instance, the agency’s own manual for dealing with complaints is explicit about what to do if someone reports concerns about a noxious odor, but is not at that very moment experiencing the smell: “DO NOT REGISTER THE COMPLAINT.” When a resident does report a real-time alarm about the air quality in or around their home, the agency typically has two weeks to conduct an investigation. 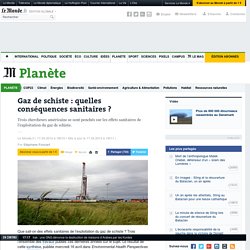 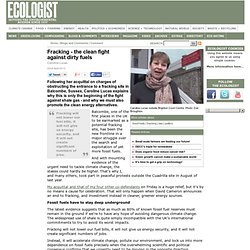 Balcombe, one of the first places in the UK to be earmarked as a potential fracking site, has been the new frontline in a major struggle over the search and exploitation of yet more fossil fuels. And with mounting evidence of the urgent need to tackle climate change, the stakes could hardly be higher. Fracking - US companies and regulators must disclose environmental data.

It's impossible to accurately predict the effects of environmental pollution if we do not know the identity and concentration of chemicals being released into soils and waterways. The rise of hydraulic fracturing, or fracking, has ushered in an era of intense drilling that has been called the great shale gas rush. Fracking allows oil and natural gas to be extracted from horizontal wells, thousands of metres below the Earth's surface. We tried to piece together the environmental impact of the great shale gas rush, and quickly discovered how little is actually known about the effects this booming industry is having on plants and wildlife. California Halts Injection of Fracking Waste, Warning it May Be Contaminating Aquifers. The potential impact of waste from oil and gas drilling, including hydraulic fracturing, on drinking water has been an issue in Texas, Wyoming and, with great urgency, in California this month. Here, a jar of fracking water waste is displayed at a recycling site in Midland, Texas.Pat Sullivan/AP This story was originally published on ProPublica.

While scientists have yet to isolate cause and effect, many suspect chemicals used in drilling and hydrofracking (or “fracking”) operations are poisoning animals through the air, water, or soil. Last year, Michelle Bamberger, an Ithaca, New York, veterinarian, and Robert Oswald, a professor of molecular medicine at Cornell’s College of Veterinary Medicine, published the first and only peer-reviewed report to suggest a link between fracking and illness in food animals. The authors compiled 24 case studies of farmers in six shale-gas states whose livestock experienced neurological, reproductive, and acute gastrointestinal problems after being exposed—either accidentally or incidentally—to fracking chemicals in the water or air. The article, published in New Solutions: A Journal of Environmental and Occupational Health Policy, describes how scores of animals died over the course of several years.

Cows lose weight, die Nor does anyone else. Fracking poses risk to UK farm animals and food safety, experts warn. The painting, propped up hastily on the roadside, depicts an alarming scene: a menacing, dark-haired man about to inject a young woman with an unknown chemical. He has one hand around her neck, the other holds a bright red needle close to her face. The girl has an arm raised up in a last act of self defence – she's trying to protect her hair, pictured sweeping upwards into the brown trunk of a tree, and her dress, depicted as a vast, gushing river. Above, by way of explanation, a crudely made banner reads: 'A Lethal Injection. Fracking injects toxic & carcinogenic chemicals into the earth. 50 - 70% of this toxic fluid remains in the ground & pollutes the area's water, soil and air.'