Big startup blitz at CES 2015. What will be hot in consumer electronics and computing in 2015? 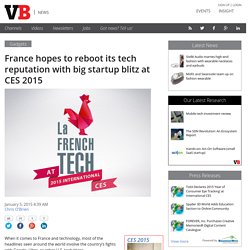 Read VB's full coverage of International CES 2015 to find out. When it comes to France and technology, most of the headlines seen around the world involve the country’s fights with Google, Uber, or other U.S. tech titans. The result is an impression that the French hate tech and fear the future. But the French government wants you to know that’s not true. In fact, the government has been doing its best lately to let the world know it loves startups and technology. To make that point loud and clear, the country is amping up its presence at the International CES 2015 in Las Vegas this week. Along with a massive number of French startups, two high-ranking government officials will be in town for the event. France Crushing It at CES. This week, Las Vegas hosts the Consumer Electronics Show, an annual mega-convention where technology companies large and small present their best ideas and products for the upcoming year. 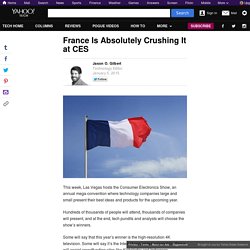 Gambling on success. WHILE much of the world is swathed in gloom, the 48th annual Consumer Electronics Show (CES) in Las Vegas, which opened to the public on January 6th, is all jollity. 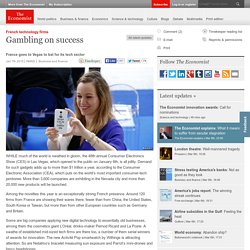 Demand for such gadgets adds up to more than $1 trillion a year, according to the Consumer Electronic Association (CEA), which puts on the world’s most important consumer-tech jamboree. More than 3,600 companies are exhibiting in the Nevada city and more than 20,000 new products will be launched. Among the novelties this year is an exceptionally strong French presence. Around 120 firms from France are showing their wares there, fewer than from China, the United States, South Korea or Taiwan, but more than from other European countries such as Germany and Britain. France reclaims 'entrepreneur' roots with leading number of start-ups in Europe.

When these entrepreneurs present their products in Las Vegas tomorrow, they will be bolstering a growing French reputation for tech start-ups. 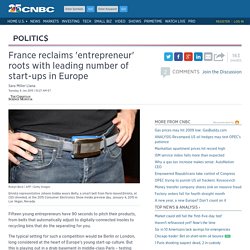 French participation at the CES has grown by 33 percent since last year. In fact, 20 percent of registrants at the trade show will be French, far ahead of the United Kingdom or Germany. Among the startups at the CES, France ranks second globally, just behind the US. They've been helped by President François Hollande, who has implemented measures to make it easier, and more financially viable, to start a company here, says Mr. Vassitch. CES: French Tech Start-Ups Push for Investor Funds: Video - Bloomberg. 11 More Cool Gadgets From CES. Best of CES 2015 finalists! Best of CES 2015 winners! One week in Vegas, several halls filled with tech, but only one official Best of CES Awards. 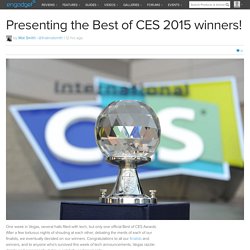 CES 2015: Popular Mechanics Editors' Choice Awards. Baby Glgl. Belty. Belty syncs wirelessly to an app to monitor wearer’s waistline and stepsIt automatically loosens and tightens as wearer sits down and stands upBelty does this by tracking tension on sensors fitted throughout the beltIt also warns wearers if they’ve been sat still for too longPrototype was built by French-based firm Emiota and is on display at the Consumer Electronics ShowExpected to launch by the end of 2015 but prices haven't been announced By Victoria Woollaston for MailOnline Published: 17:21 GMT, 5 January 2015 | Updated: 10:39 GMT, 6 January 2015 If you’ve piled on the pounds over the Christmas break, your belt might be feeling a little tight. 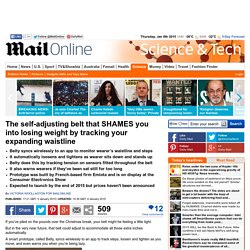 But in the very near future, that belt could adjust to accommodate all those extra inches automatically. Withings Activité Pop. Withings has shored up the only major complaint I had with its Activité fitness and activity tracker/watch: The price. 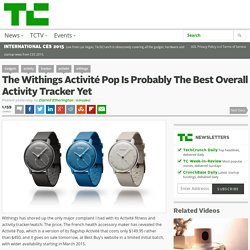 Lima. French startup Lima is presenting another piece of its offering at CES, the mobile app. 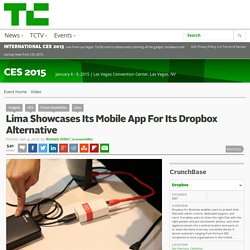 And it is a very promising app for those who backed Lima to seamlessly access their photos, music library and movies from their phones and tablets. While the team still needs to polish the app interface, it goes beyond Dropbox and Carousel when it comes to features. As a reminder, Lima is a small device that you plug to your router using Ethernet, as well as an external USB drive. It will then seamlessly transform your USB drives into a personal Dropbox for all your devices. Connected Cycle. Chipmaker's Real Sense 3D tech enables gesture controls, smarter drones and a jacket that can help the visually impaired. 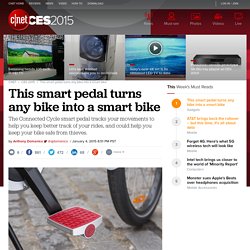 LAS VEGAS -- You've spent years -- decades -- typing on a keyboard and dragging your mouse around to control your computer. Giroptic. Cityzen Sciences. Parrot. 3D Rudder. LAS VEGAS -- Why walk around in a video game with a keyboard or gamepad, when your feet can do it for you? 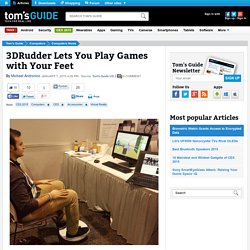 That's the idea behind 3DRudder, a unique motion controller that lets you navigate 3D environments using your own feet. I spent some feet-on time with the 3DRudder, which is available on Indiegogo for $110 and will be shipping in May, and came away excited about its potential to change the way we play games. The 3DRudder unit I tested looked like a circular scale, with a thick plastic base and two sandpaper-like foot grips on top. The controller rotates on a central axis, allowing you to move around by simply applying pressure with your feet in any direction you like. Kolibree. What will be hot in consumer electronics and computing in 2015? Read VB's full coverage of International CES 2015 to find out. LAS VEGAS — Some kids don’t like brushing their teeth. Glagla Shoes. Voxtok. Parrot.