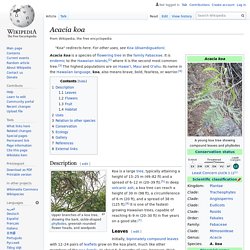 Willow. Genus of plants Willows, also called sallows and osiers, form the genus Salix, around 400 species[1] of deciduous trees and shrubs, found primarily on moist soils in cold and temperate regions of the Northern Hemisphere. 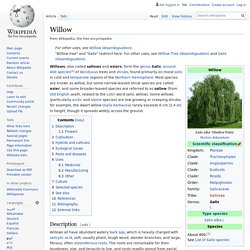 Most species are known as willow, but some narrow-leaved shrub species are called osier, and some broader-leaved species are referred to as sallow (from Old English sealh, related to the Latin word salix, willow). Some willows (particularly arctic and alpine species) are low-growing or creeping shrubs; for example, the dwarf willow (Salix herbacea) rarely exceeds 6 cm (2.4 in) in height, though it spreads widely across the ground. Terbinafine. Antifungal medication. 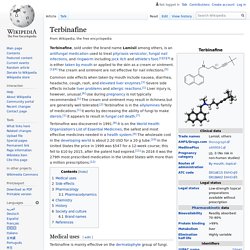 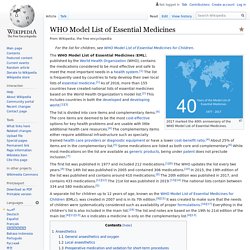 The WHO Model List of Essential Medicines (EML), published by the World Health Organization (WHO), contains the medications considered to be most effective and safe to meet the most important needs in a health system.[1] The list is frequently used by countries to help develop their own local lists of essential medicine.[1] As of 2016[update], more than 155 countries have created national lists of essential medicines based on the World Health Organization's model list.[2] This includes countries in both the developed and developing world.[1][3] Miconazole. Miconazole, sold under the brand name Monistat among others, is an antifungal medication used to treat ring worm, pityriasis versicolor, and yeast infections of the skin or vagina.[1] It is used for ring worm of the body, groin (jock itch), and feet (athlete's foot).[1] It is applied to the skin or vagina as a cream or ointment.[1] Common side effects include itchiness or irritation of the area in which it was applied.[1] Use in pregnancy is believed to be safe for the baby.[2] Miconazole is in the imidazole family of medications.[1] It works by decreasing the ability of fungi to make ergosterol, an important part of its cell membrane.[1] Medical uses[edit] Miconazole is mainly used externally for the treatment of ringworm including jock itch and athlete's foot.

Internal application is used for oral or vaginal thrush (yeast infection). This oral gel may also be used for the lip disorder angular cheilitis and other associated systems. Coal tar. Side effects include skin irritation, sun sensitivity, allergic reactions, and skin discoloration.[5] It is unclear if use during pregnancy is safe for the baby and use during breastfeeding is not typically recommended.[7] The exact mechanism of action is unknown.[8] It is a complex mixture of phenols, polycyclic aromatic hydrocarbons (PAHs), and heterocyclic compounds.[2] It demonstrates antifungal, anti-inflammatory, anti-itch, and antiparasitic properties.[8] Uses[edit] Medicine[edit] 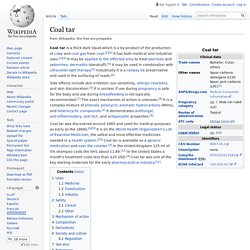 Ketoconazole. Ketoconazole, sold under the brand name Nizoral among others, is an antifungal medication used to treat a number of fungal infections.[6] Applied to the skin it is used for fungal skin infections such as tinea, cutaneous candidiasis, pityriasis versicolor, dandruff, and seborrhoeic dermatitis.[7] Taken by mouth it is a less preferred option and only recommended for severe infections when other agents cannot be used.[6] Other uses include excessive hair growth and Cushing's syndrome.[6] Common side effects when applied to the skin include redness.[7] Common side effects when taken by mouth include nausea, headache, and liver problems.[6] Liver problems may result in death or the need for a liver transplantation.[6][8] Other severe side effect when taken by mouth include QT prolongation, adrenocortical insufficiency, and anaphylaxis.[6][8] It is an imidazole and works by affecting the production of ergosterol required for the fungal cell membrane thereby slowing growth.[6] 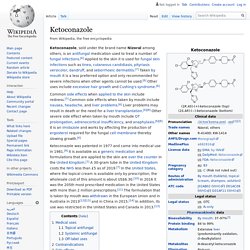 Selenium disulfide. Selenium disulfide, also known as selenium sulfide, is a medication used to treat pityriasis versicolor, seborrhoeic dermatitis, and dandruff.[1] It is applied to the affected area as a lotion or shampoo.[2] Dandruff frequently returns if treatment is stopped.[3] Side effects include hair loss, irritation of the skin, weakness, and feeling tired.[1] Use is not recommended in children less than 2–5 years old.[1][3] Use in pregnancy or breastfeeding has not been studied.[4] Selenium disulfide is an inorganic compound with the chemical formula SeS2.[5] Medical uses[edit] Selenium disulfide is sold as an antifungal agent in shampoos for the treatment of dandruff and seborrheic dermatitis associated in the scalp with fungi of genus Malassezia.[8][9][10] In the United States, a 1% strength is available over-the-counter, and a 2.5% strength is also available with a prescription. 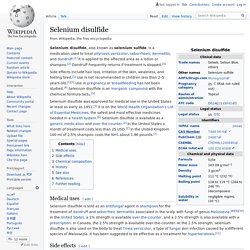 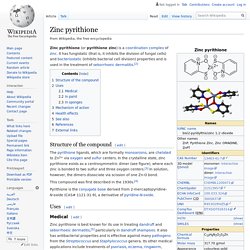 It has fungistatic (that is, it inhibits the division of fungal cells) and bacteriostatic (inhibits bacterial cell division) properties and is used in the treatment of seborrhoeic dermatitis.[2] Structure of the compound[edit] The pyrithione ligands, which are formally monoanions, are chelated to Zn2+ via oxygen and sulfur centers. In the crystalline state, zinc pyrithione exists as a centrosymmetric dimer (see figure), where each zinc is bonded to two sulfur and three oxygen centers.[3] In solution, however, the dimers dissociate via scission of one Zn-O bond. Adapalene. Adapalene is a third-generation topical retinoid primarily used in the treatment of mild-moderate acne, and is also used off-label to treat keratosis pilaris as well as other skin conditions.[1] It is effective against acne conditions where comedones are predominant. 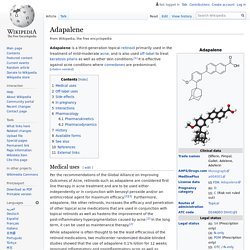 [citation needed] Medical uses[edit] Per the recommendations of the Global Alliance on Improving Outcomes of Acne, retinoids such as adapalene are considered first line therapy in acne treatment and are to be used either independently or in conjunction with benzoyl peroxide and/or an antimicrobial agent for maximum efficacy.[2][3] Furthermore, adapalene, like other retinoids, increases the efficacy and penetration of other topical acne medications that are used in conjunction with topical retinoids as well as hastens the improvement of the post-inflammatory hyperpigmentation caused by acne.[2] In the long term, it can be used as maintenance therapy.[2] Benzoyl peroxide. Benzoyl peroxide (BPO or BzO2) is a medication and industrial chemical.[2] As a medication, it is used to treat mild to moderate acne.[3] For more severe cases, it may be used with other treatments.[3] Some versions are sold mixed with antibiotics such as clindamycin.[4] Other uses include bleaching flour, hair bleaching, teeth whitening, and textile bleaching.[5][6][7] It is also used in the plastic industry.[2] Common side effects are skin irritation, dryness, or peeling.[3][8] Use in pregnancy is of unclear safety.[9] Benzoyl peroxide is in the peroxide family of chemicals.[6] When used for acne, it works by killing bacteria.[5] Uses[edit] Acne treatment[edit] Tube of a water-based 5% benzoyl peroxide preparation for the treatment of acne.

Salicylic acid. Salicylic acid (from Latin salix, willow tree, from the bark of which the substance used to be obtained) is a monohydroxybenzoic acid, a type of phenolic acid and a beta hydroxy acid. This colorless crystalline organic acid is widely used in organic synthesis and functions as a plant hormone. It is derived from the metabolism of salicin. In addition to being an important active metabolite of aspirin (acetylsalicylic acid), which acts in part as a prodrug to salicylic acid, it is probably best known for its use as a key ingredient in topical anti-acne products.

The salts and esters of salicylic acid are known as salicylates. Chemistry[edit] Salicylic acid has the formula C6H4(OH)COOH, where the OH group is ortho to the carboxyl group. Hexachlorophene. Hexachlorophene, also known as Nabac, is an organochlorine compound that was once widely used as a disinfectant. The compound occurs as a white odorless solid, although commercial samples can be off-white and possess a slightly phenolic odor.

It is insoluble in water but dissolves in acetone, ethanol, diethyl ether, and chloroform. Phisoderm. Phisoderm is a skin detergent which assists persons who are allergic to soap and Phisohex, a detergent[1] and sudsless cleanser[2] which prevents the spread of infections. In the 1950s both Phisoderm and Phisohex were manufactured by Winthrop Laboratories. Earlier the product was made by Fairchild Brothers & Foster. Phisoderm was developed by B. Thurber Guild (1886–1958), a physician and pharmaceutical manufacturer. Guild practiced medicine in Boston, Massachusetts, and was a specialist in allergies.[1] The brand is currently owned by Mentholatum. Dial (soap) Brand of soap and bodywash.