Chris Brown moves on from arrest controversy! Drake and Rihanna confirmed their relationship with a kiss on stage! There's no racism in film industry, says Nawazuddin. HIV positive woman refused by hospital, gives birth to stillborn! After Oscars, Priyanka Chopra is all set to Present at the Emmy's! Being human is a responsibility and these people have proved it! This little girl gave a kick-ass punch to the eve teaser! Perrie Edwards to address split with Zayn in new album! - lafdatv. Singer Perrie Edwards is to sing about her split from singer Zayn Malik on British group Little Mix’s new album. 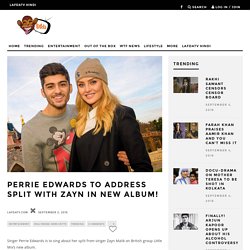 The 23-year-old was dumped by the One Direction star last summer and Edwards and her bandmates Jesy Nelson, Leigh-Anne Pinnock and Jade Thirlwall have recorded songs about their individual heartbreaks for their forthcoming LP, reports femalefirst.co.uk. “I think it’s always easier to write about your experiences through music because more people can relate to them anyway,” Nelson told The Sun newspaper. “It is a lot more mature, this album. There’s a lot of things that have been said that perhaps nobody has heard yet, if you know what I mean,” she added. Quizzed on whether Little Mix fans will know who is being sung about on each song, Nelson said, “all the songs are very relatable to girls, and our fan base in general”. But it won’t be an album of doom and gloom, as they group insisted their upcoming fourth studio record is ‘very positive’. Source: IANS.

'Ghaazi' is Tapsee's Only Telugu Project for now! Actress Tapsee Pannu has cut down on her Telugu projects for now as is currently doing just one film titled Ghaazi. 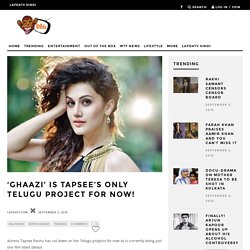 “Right now unfortunately I am doing only one Telugu film, and that’s ‘Ghaazi’. It’s a film both my co-star Rana Daggubati and I are very proud of,” says Tapsee, adding that she’s on the look-out for another Telugu project. “Unfortunately I haven’t been offered anything spectacularly inviting as of now in Telugu. After ‘Ghaazi‘, I don’t want to do anything inconsequential in any language, be it Tamil, Telugu or Hindi,” she added. “Though it is set in the 1970’s we don’t go around trying hard to recreate the era with out clothes and music. The release date of the film is now being worked out. In Hindi cinema industry, Tapsee has come a long way from Chashme Buddoor to Pink. '31st October' not made to deliver justice, says Soha Ali Khan. Actress Soha Ali Khan, who is all set for the release of her long-delayed film “31st October”, says it is not made to deliver justice. 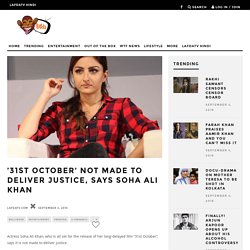 Speaking at the trailer launch of the film, based on the assasination of then Prime Minister Indira Gandhi and its aftermath, Soha said: “The film is not made to deliver justice. Everybody knows that justice delayed is justice denied. We made a film to share a story of a Sikh family, which is set against that 1984 backdrop.” Further clarifying her statement, the actress stated: “The legal system is complicated and we are not lawyers or judges. We are artists and we made a film. The makers reveal that they had to go through several hardships and the film faced objections because of the backdrop of the anti-Sikh riots in the country after Indira Gandhi’s assassination. Hema Malini hails MP government for maintaining Narmada river!

Veteran actress and politician Hema Malini has hailed the government and people of Madhya Pradesh for maintaining the beauty of Narmada river. 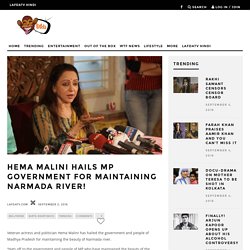 “Hats off to the government and people of MP who have maintained the beauty of the Narmada and are carefully preventing any deterioration of the river,” the Bhartiya Janata Party MP tweeted on Thursday. She is currently shooting on the banks of Narmada and she can’t stop praising the river’s beauty. “Shooting here on the banks of the beautiful Narmada! What serene beauty, no garbage pile up on the banks. 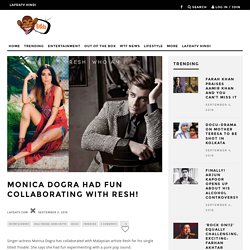 She says she had fun experimenting with a pure pop sound. The emotionally charged ballad is the third single from Who Am I. Monica said in a statement, “Experimenting with a pure pop sound is something I have never done before. I had fun! I think I learn something new about myself through these collaborations. “I’m really interested in bridging the gap between India and other Southeast Asian countries. तानशाह किम जोंग ने अंग्रेजी सीखने के लिए इस अमेरिकी को करवाया था अगवा Dipa Karmakar most inspiring Indian woman, Survey reveals. Gymnast Dipa Karmakar, who was lauded for her performance at Rio Olympics, is the most inspiring Indian woman, according to a survey. 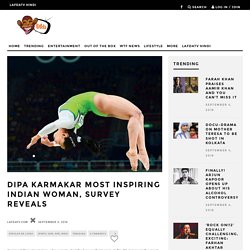 Shaadi.com, a matchmaking service, recently conducted a survey to understand the definition of success for millennials. The survey was conducted online with over 12,500 responses from Indians (married and unmarried) with ages ranging from 23 to 30 years, according to a statement. When millennials were asked about “Which Indian woman inspires them the most” in the recent past, 33.7 per cent said Karmakar, followed by 27.4 per cent who said wrestler Sakshi Malik, 27.1 per cent said shuttler P.V. 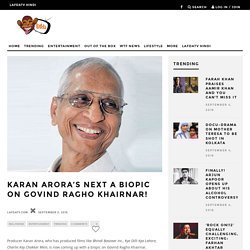 “The first challenge was to convince the reluctant and often low-profiled G.R.Khairnar to make a biopic on his life and seek his blessings on this venture. And the second was to find a seasoned storyteller and scriptwriter who would be able to provide justice with this biopic,” Karan Arora told IANS. Govind Ragho Khairnar rose from the rank of Clerk to Deputy Commissioner of BrihanMumbai Municipal Corporation (BMC), and has been immortalised for his exemplary uprightness and fearlessness while carrying out his duties in the face of political opposition and pressure. 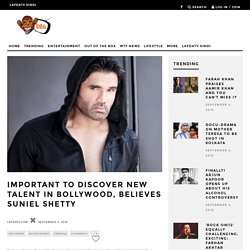 Speaking at the premiere of Sunshine Music Tours and Travel, the 55-year-old actor said, “It’s great that this film has introduced many newcomers in Bollywood. I wish them all the best. I feel it is important to discover new talents in Bollywood.” Shailendra Singh, director of the film, creates a record with this film as he brings along a young brigade of 170 newcomers, including Sunny Kaushal, son of action director Sham Kaushal. And Sunil hopes that the film gets success. “Hopefully, the film gets success so that these newcomers become established in the industry,” he said. The actor who was last seen in Desi Kattey is coming back to the silver screen after three years and he hopes that his comeback film releases next year. ” I am hopeful that it will release next year. तो जियो का सारा दारोमदार संभाल रहे हैं मुकेश अंबानी के जुड़वा आकाश और ईशा इस जाने माने गायक का बेटा पुणे में एक पुल के नीचे भीख मांगते पाया गया 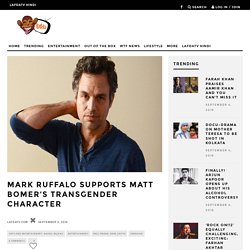 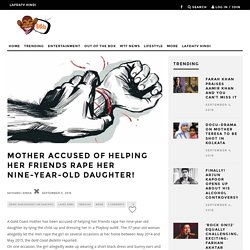 The 37-year-old woman allegedly let the men rape the girl on several occasions at her home between May 2014 and May 2015, the Gold Coast Bulletin reported. On one occasion, the girl allegedly woke up wearing a short black dress and bunny ears and was then made to give a man oral sex. The mother has been charged with 17 offences, including rape and torture, and appeared in Southport Magistrates Court on Friday. Police will also accuse the woman of performing oral sex on her daughter during one incident in which the girl woke up in the garage on her hands and knees as she was being fondled by multiple people, the paper reported. It is alleged that when the girl protested, a man threatened to shoot her and she was then raped and restrained on the floor.

Guy donated lifetime supplies of cookies to homeless! - lafdatv. Bradley Williams proves that not every super hero wears capes and underwear over their suites. This lad won some random bakery challenge and was rewarded with a lifetime supply of sweet snacks. What he did after winning the Bake Mates challenge was completely out of the box! Bradley, 19, from Canterbury, randomly saw Bake Mates come up on his Facebook feed and so dropped them a message seeing if they’d be up for giving him a lifetime supply of cookies and brownies if he managed to get 20,000 likes, 10,000 comments and 5000 shares on his status.

“The board is proud to honour their extraordinary achievements,” Isaacs added. Jackie, 62, won praise from the Academy for his “distinctive international career”, which has seen him star in, write, direct and produce movies in his native Hong Kong, as well as achieve box office success around the globe. ऐसा लव बाइट दिया कि जोड़ीदार की चली गई जान, रोमांस के दौरान ऐसा हुआ. किस करने में इस बच्चे ने अपने बाप को भी चैलेंज करके हराया Is Anand L. Rai's next with Shah Rukh Khan a romantic film? Director-producer Anand L. Rai, who has directed a string of hit films like Tanu Weds Manu and Raanjhanaa, has said his upcoming movie with superstar Shah Rukh Khan will have a romantic story. “I don’t want to reveal the story. For now, I am keeping it to myself only.

Hopefully, I can bring a great story for the audience. Let me save the suspense for you,” said Rai at the premiere of the movie Sunshine Music Tours And Travels. However, he hinted that it will be a romantic plot. Asked whether it would be a romantic movie, he said: “You may assume that. The film will hit theatres on December 21, 2018, and Shah Rukh Khan is to play a dwarf in the movie. “Release dates always scare me but it has to be announced, so we did it. The film is produced by Dilwale star’s home production, Red Chillies Entertainment. Meanwhile, Shah Rukh is currently shooting for Imtiaz Ali’s The Ring with Anushka Sharma in Prague.

बचपन का यह डर कोई भी बच्चा जिंदगी भर नहीं भूल पाएगा Justin Bieber describes Ed Sheeran as inspiration! Grammy Award winning singer Justin Bieber says his friend and singer Ed Sheeran is an inspiration. The 22-year-old Canadian singer, who has a string of celebrity friends in his inner circle, including Usher, Chris Brown and Floyd Mayweather, worked with the British songwriter on the track Love Yourself, which features on his album Purpose and hit song Cold Water, which he recorded with Major Lazer and MO.