Web, outils, techno, trucs de geeks...ou pas ! Politique. Please Don't Learn to Code. The whole "everyone should learn programming" meme has gotten so out of control that the mayor of New York City actually vowed to learn to code in 2012. 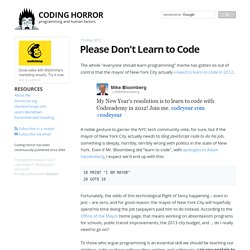 A noble gesture to garner the NYC tech community vote, for sure, but if the mayor of New York City actually needs to sling JavaScript code to do his job, something is deeply, horribly, terribly wrong with politics in the state of New York. Even if Mr. Bloomberg did "learn to code", with apologies to Adam Vandenberg, I expect we'd end up with this: Fortunately, the odds of this technological flight of fancy happening – even in jest – are zero, and for good reason: the mayor of New York City will hopefully spend his time doing the job taxpayers paid him to do instead.

According to the Office of the Mayor home page, that means working on absenteeism programs for schools, public transit improvements, the 2013 city budget, and … do I really need to go on?