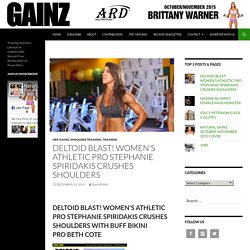 Why??? Well, first of all these athletes are in INCREDIBLE shape and look amazing! Second, this type of feature (as mentioned in my opening letter) is the direction we are now heading in with GAINZMAG and really what I had envisioned for this publication when I launched it almost 2 years ago. Also, because these two young ladies are new IPL Pros who both snagged victories and accompanying Pro Cards (Stephanie in Athletic, and Beth in Bikini) at the 2015 IPL North Atlantic Championship, one of the contests my new league hosted this year.

So, sit back and check out this awesome feature narrated by Stephanie “Crazy Delts” Spiridakis, enjoy the photos, and pic up some tips that will surely help with your shoulder GAINZ! “My shoulders were lacking the nice pumpkin shape for years so I decided to train shoulders twice a week…” Dumbbell Side Lateral raises Light Day. 3 Months To More Mass. When it comes to gaining mass, everybody’s an expert. 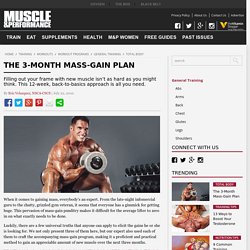 From the late-night infomercial guru to the chatty, grizzled gym veteran, it seems that everyone has a gimmick for getting huge. This pervasion of mass-gain punditry makes it difficult for the average lifter to zero in on what exactly needs to be done. Luckily, there are a few universal truths that anyone can apply to elicit the gains he or she is looking for.

We not only present three of them here, but our expert also used each of them to craft the accompanying mass-gain program, making it a proficient and practical method to gain an appreciable amount of new muscle over the next three months. Truth No. 1: Muscles Grow With Big Lifts In The 8 to 12 Rep Range Some people like to take a high-volume approach to muscle growth, insisting that challenging, high-rep sets flush the muscles with blood and trigger new growth. Cluster Training: How to Use It to Build Muscle and Strength. I actually find it strange that more hasn’t been written about cluster training recently. 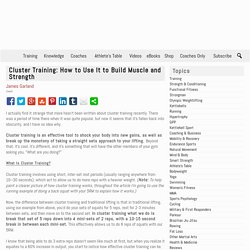 There was a period of time there when it was quite popular, but now it seems that it’s fallen back into obscurity, and I have no idea why. Cluster training is an effective tool to shock your body into new gains, as well as break up the monotony of taking a straight sets approach to your lifting. Beyond that, it’s cool, it’s different, and it’s something that will have the other members of your gym asking you, “What are you doing?” What Is Cluster Training? Cluster training involves using short, inter-set rest periods (usually ranging anywhere from 10–30 seconds), which act to allow us to do more reps with a heavier weight. Now, the difference between cluster training and traditional lifting is that in traditional lifting, using our example from above, you’d do your sets of squats for 5 reps, rest for 2-3 minutes between sets, and then move on to the second set.

Off-Season Size And Strength Training Program! The winter months, for most of us, is the time of year to concentrate on gaining mass and strength, maybe bringing up a weak body part or two. 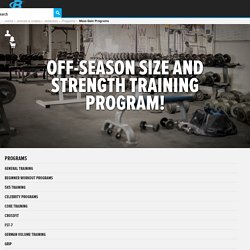 Now isn't the time to worry about 6-pack abs. Not that you want to get fat—this isn't a "bulking up" program in the traditional sense—but your training should be more about using heavy weights and adding size, not about getting lean to look good on the beach. Speaking of bulking up ... I remember when I got into bodybuilding in 1980. I actually got into it through a friend who had ordered a "Universal bodybuilding" course in the mail. 4 Day Maximum Mass Workout. This is an intermediate muscle building workout for lifters who: Have experienced beginner gains and are confident they know how to build muscle. 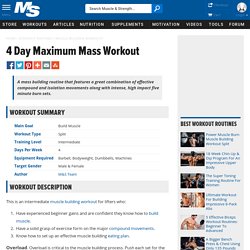 Have a solid grasp of exercise form on the major compound movements. Hct 12. 12-Week Mass-Building Workout! 5 Best Bodybuilding Programs To Pack On Serious Muscle! For anyone looking to pack on some serious muscle mass, one of the top priorities will be to determine what the best bodybuilding workout to follow is. 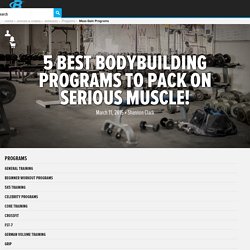 There are a wide range of different workouts available, so choosing the one that will suit your needs best is important. It's also essential that you understand which factors contribute the most to gaining lean muscle mass. A program that utilizes these principles will often fare better than one that doesn't. Let's take a brief look at some of the more popular bodybuilding workout set-ups and identify the pros and cons of each. 1 The 5 X 5 Program The five-by-five program is one that is quite popular among those who are looking to gain a high amount of strength and muscle mass.

The set-up of this program is to perform three main exercises that target the main muscle groups in the body (both lower and upper body in the same workout), performing five sets of five repetitions. Workout Routines: Gain 10 Pounds of Muscle in 4 Weeks. It’s a lofty goal: Gain 10 pounds of muscle in just one month. 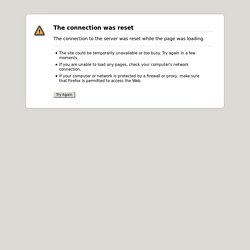 While such results are aggressive and can’t continue at the same torrid rate indefinitely, we’ve seen firsthand individuals who’ve followed our mass-gaining programs and reached double digits in four short weeks, averaging gains of 2-3 pounds a week. Trust us, it can be done. But if there’s one thing such a bold goal needs, it’s an ambitious training and nutrition strategy. In regard to nutrition, don’t even think about taking that aspect lightly. You can work out all you want, but if you don’t ingest adequate calories and macronutrients, you won’t build muscle. First up, however, is training. Weeks 1-2: Heavy Hitter The first two weeks of the program are all about lifting heavy with mass-building compound exercises. The volume here isn’t excessive. The four-day split pairs a large bodypart (chest, back, shoulders, quads/hams) with one or two smaller muscle groups (tri’s, bi’s, traps, calves, abs) in each workout.