Mapping. Esame di Stato - Secondo Ciclo: FAQ. PSDN2015 - LIBRI DIGITALI - Google Slides. Shakespeare. Javahotpot61. Modernist architecture: Roots (1920-1929) Creative commons image Credit: Paolo Rosa 10 under CC-BY-NC-ND 11 licence The machine age The roots of the Modern Movement can be traced back to the profound social and technological changes which characterised the end of the 19th century and the beginning of the twentieth. 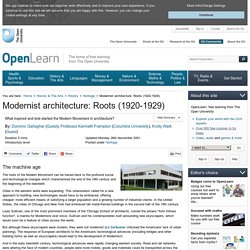 Cities in the western world were expanding. Louis Sullivan, one of the most prominent members of the 'Chicago School' of architects, coined the phrase "form follows function", a mantra for Modernists ever since. But although these skyscrapers were modern, they were not modernist (Le Corbusier12 criticised the Americans' lack of urban planning). And in the early twentieth century, technological advances were rapidly changing western society. Machines, in the form of cars, telephones, and ocean liners captured the public imagination, and emphasised the positive force that technology could play in people's lives.

A way to reduce the High School dropout epidemic. Small dip in teenage dropout rate hailed. 22 August 2013Last updated at 11:07 ET This year's GCSE students have to stay on education and training until they are 17. 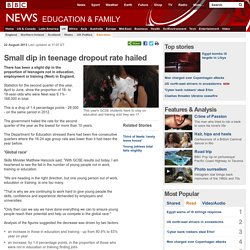 There has been a slight dip in the proportion of teenagers not in education, employment or training (Neet) in England. Statistics for the second quarter of this year, April to June, show the proportion of 16- to 18-year-olds who were Neet was 9.1% - 168,000 in total. This is a drop of 1.4 percentage points - 28,000 - on the same period in 2012. The government hailed the rate for the second quarter of the year as the lowest for more than 10 years.

The Department for Education stressed there had been five consecutive quarters where the 16-24 age group rate was lower than it had been the year before. 'Global race' Skills Minister Matthew Hancock said: "With GCSE results out today, I am heartened to see the fall in the number of young people not in work, training or education. Analysis of the figures suggested the decrease was driven by two factors: UK has ‘lowest drop-out rate in Europe’ The UK has the lowest higher education drop-out rate in Europe, a new study shows. 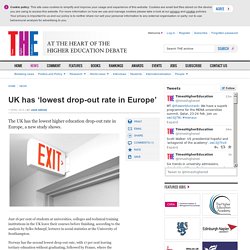 Just 16 per cent of students at universities, colleges and technical training institutions in the UK leave their courses before finishing, according to the analysis by Sylke Schnepf, lecturer in social statistics at the University of Southampton. Norway has the second lowest drop-out rate, with 17 per cent leaving tertiary education without graduating, followed by France, where the figure is 19 per cent. UK school dropout rate is one of worst in developing world. By Kate Loveys Updated: 10:16 GMT, 14 September 2011 Britain has some of the worst dropout rates from schools and colleges in the developed world – more than nations such as Estonia, Greece and Slovenia, it was revealed yesterday. 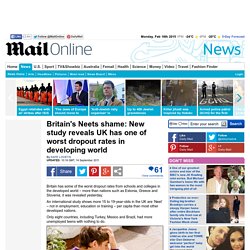 An international study shows more 15 to 19-year-olds in the UK are ‘Neet’ – not in employment, education or training – per capita than most other developed nations. Only eight countries, including Turkey, Mexico and Brazil, had more unemployed teens with nothing to do. Employment crisis: The UK has more teenagers not in work, employment or training than most other developed nations (posed by model) The study, by the Organisation for Economic Co-operation and Development, has prompted renewed fears that a ‘lost generation’ will find themselves stranded without jobs or qualifications.

It comes despite huge spending on education under Labour. Pages for iCloud beta. The%20Age%20of%20Stuarts_lesson2.ppt. 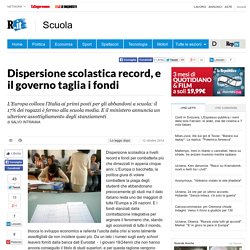