Therapeutic Mudras. Like Yoga, Mudras are boon to mankind. 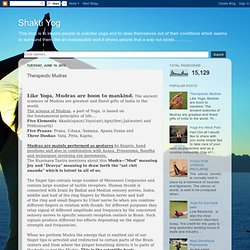 The ancient sciences of Mudras are greatest and finest gifts of India to the world. The science of Mudras, a part of Yoga, is based on the fundamental principles of life.... Five Elements- Akash(space),Vayu(air),Agni(fire),Jal(water) and Prithvi(earth) Five Pranas- Prana, Udana, Samana, Apana,Vyana and Three Doshas- Vata, Pitta, Kapha Mudras are mainly performed as gestures by fingers, hand positions and also in combination with Asana, Pranayama, Bandha and techniques involving eye movements.

The Kuarnava Tantra mentions about this Mudra--"Mud" meaning Joy and "Dravya" meaning to draw forth the "sat chit ananda" which is latent in all of us. The finger tips contain large number of Meissners Corpuscles and contain large number of tactile receptors. While performing the Mudra combining the fingertip with the Thumb tip subtle sensation of vibration is felt. Finger Element Thumb Fire Index Air Middle Space Ring Earth Little Water. Mudras.

Ninjustu Ninja Secrets Kanji Mudra. Kuji-In: Hands of Power. Kuji-In. Meditation practice is associated with a purification and activation of the kundalini and the chakras or energy centers associated with it. 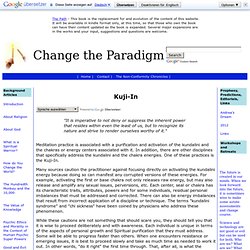 In addition, there are other disciplines that specifically address the kundalini and the chakra energies. One of these practices is the Kuji-In. Many sources caution the practitioner against focusing directly on activating the kundalini energy because doing so can manifest any corrupted versions of these energies. For example, activating the first or base chakra not only releases raw energy, but may also release and amplify any sexual issues, perversions, etc.

Each center, seal or chakra has its characteristic traits, attributes, powers and for some individuals, residual personal imbalances that must be addressed and corrected. While these cautions are not something that should scare you, they should tell you that it is wise to proceed deliberately and with awareness. Kuji-In is Japanese for nine symbols, nine syllables, nine seals or nine gates. Rin. Kuji In (Ninja Magic) ....Rin....Rin is the first mudra of the kuji in mudra set. 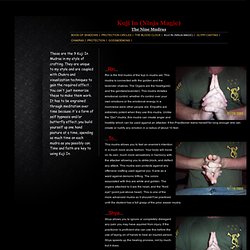 This mudra is connected with the golden and the lavender chakras. The Organs are the heart(gold) and the genitals(lavender). This mudra dictates emotional control; whether it's control over your own emotions or the emotional energy in a room/area were other people are. Empaths are extremely potent when they use this mudra. Unlike the "Zen" mudra, this mudra can create anger and hostility which can be used against an attacker. .....To..... This mudra allows you to feel an enemie's intention in a much more acute fashion. .....Shya..... Shya allows you to ignore or completely disregard any pain you may have aquired from injury. ...Kyo..... This mudra is used for concealment. .....Kai..... You know that gut feeling you get sometimes, and it turns out to be exactly what you thought it was? .....Jin.....This Mudra is more advanced and can be dangerous.