“The Ying Qi Cycle and the Diurnal Evolutionary Unfoldment of the Extraordinary Vessels” Introduction The ying qi flows through the 12 primary channels, corresponding to the horary clock and the cycles of day and night. 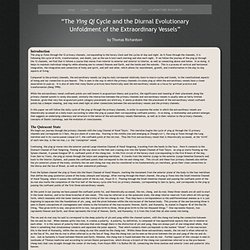 As it flows through the channels, it is following the cycle of birth, transformation, and death, just as the sun is born each morning and dies each night. The Eight Extraordinary Meridians: Our Genetic Imprinting. By Mary Elizabeth Wakefield, LAc, Dipl. 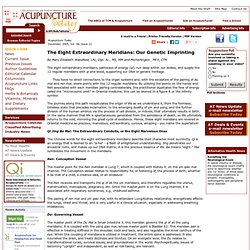 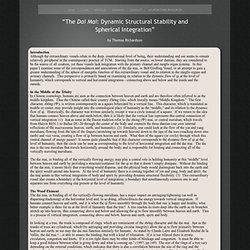 Starting from the source, or lower dantian, they are considered to be the source of all creation, yet these vessels lack integration with the primary channel and zangfu organ systems. GV 4 Acupuncture Point - Ming Men - Governing Vessel Meridian. Read Circulation/Sex. Andrew Prescott Page 1 of 13 What's in a name?

- Pericardium, Heart Master, Circulation/Sex J. R. Worsely spoke of Twelve Officials rather than Five Zang and Six Fu. Nan Jing difficulty 25 and 39. The Foundations of Pregnancy in Chinese Medicine. BAO ZHONG OR PRIMORDIAL KIDNEY. Print: Chapter 38. Urology. Adrenal fatigue symptoms and seven ways to support and heal your adrenal glands. (NaturalNews) In our modern world, adrenal fatigue is extremely common and estimated by some experts to affect approximately 80 percent of the population to some degree. 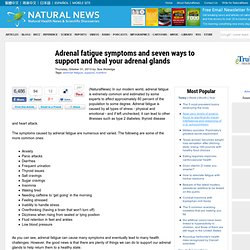 Adrenal fatigue is caused by all types of stress - physical and emotional - and if left unchecked, it can lead to other illnesses such as type 2 diabetes, thyroid disease and heart attack. The symptoms caused by adrenal fatigue are numerous and varied. Adaptogenic herbs almost always fall into the category of herbal aphrodisiacs. Every ancient culture had at least some adaptogenic herbs present in their pharmacopoeia. 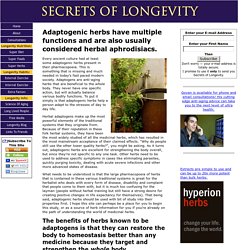 This is something that is missing and much needed in today's fast paced modern society. Adaptogens are anti-aging herbs that are beneficial to the whole body. They never have one specific action, but will actually balance various bodily functions. To put it simply is that adaptogenic herbs help a person adapt to the stresses of day to day life. Herbal adaptogens make up the most powerful elements of the traditional systems that they originate from. What needs to be understood is that the large pharmacopoeia of herbs that is contained in these various traditional systems is great for the herbalist who deals with every form of disease, disability and complaint that people come to them with, but it is much too confusing for the layman (people without herbal training but still have a strong desire for creating positive changes in life expectancy for themselves). 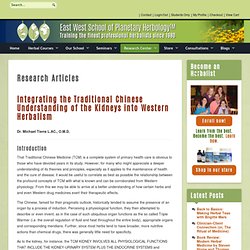 Michael Tierra L.AC., O.M.D. Introduction That Traditional Chinese Medicine (TCM) is a complete system of primary health care is obvious to those who have devoted years in its study. However, for many who might appreciate a deeper understanding of its theories and principles, especially as it applies to the maintenance of health and the cure of disease, it would be useful to correlate as best as possible the relationship between the profound concepts of TCM with what is known and can be corroborated from Western physiology. ‎www.govita.com.au/factsheets/Strengthening%20kidneys.pdf. Giovanimaciocia-thepenetratingvessel - acupuncturehealthclinic. ‎www.gera.fr/Downloads/Formation_Medicale/MALADIES-INFECTIEUSES-EN-MTC-ET-ACUPUNCTURE/yang-24038.pdf. Li Ching-Yuen. Li Ching-Yuen or Li Ching-Yun (simplified Chinese: 李清云; traditional Chinese: 李清雲; pinyin: Lǐ Qīngyún; died May 6, 1933) was a Chinese herbalist who supposedly lived to be over 256 years old. 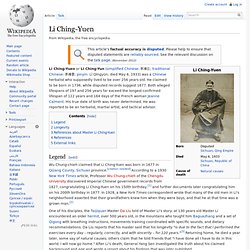 He claimed to be born in 1736, while disputed records suggest 1677. Both alleged lifespans of 197 and 256 years far exceed the longest confirmed lifespan of 122 years and 164 days of the French woman Jeanne Calment. His true date of birth was never determined. 256 Year Old Chinese Herbalist Li Ching-Yuen, Holistic Medicine, and 15 Character Traits That Cause Diseases. The herbalist had 23 wives and raised more than 200 children According to the official records, herbalist Li Ching-Yuen was born in China in 1677 (although he himself claimed that he was born in 1736). 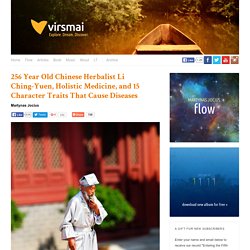 Throughout his long life, he constantly practiced herbalism and martial arts. In 1930, the New York Times newspaper printed an article in which they published official Chinese government documents that were uncovered.