Kali, The Dangerous Mother. Choying Dolma and Guqing in Shanghai 琼音卓玛与成公亮 梵呗古琴音乐会. Ani Choying Drolma. Milarepa 2006 OST - Padmakara. Padmakara. Ani Choying Drolma - life - Padmakara - Basel Juli 2005. Saggio Maestro Mantra Relax (Ra Ma Da Sa - Snatam Kaur) Deva Premal and Miten - Gayatri Mantra. Deva Premal .. Gayatri Mantra. Kundalini Yoga - Popular Mantras. The "Yoga of the Mind", a mantra is a syllable, word or phrase in one of the sacred languages (like Sanskrit & Ghurmeki) and sometimes in English, which elevates or modifies consciousness through its meaning, the sound itself, rhythm, tone, and even the reflexology of the tongue on the palate. 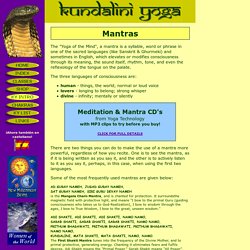 The three languages of consciousness are: human - things, the world; normal or loud voice lovers - longing to belong; strong whisper divine - infinity; mentally or silently There are two things you can do to make the use of a mantra more powerful, regardless of how you recite. One is to see the mantra, as if it is being written as you say it, and the other is to actively listen to it as you say it, perhaps, in this case, when using the first two languages. Some of the most frequently used mantras are given below: AdiShakti_Mantra music. Om Namah Shivaya ! Shivaya Namah Om ! MUL MANTRA ~ Snatam Kaur HD. Sincronía 12 - Deva Premal - Moola Mantra [Full].mp4. Deva Premal .. Moola Mantra. Mool Mantar. Manglacharan in the handwriting of Guru Arjan Dev ji from the Kartarpuri Bir The Mool Mantar (also spelt Mul Mantra) is the most important composition contained within the Sri Guru Granth Sahib, the holy scripture of the Sikhs; it is the basis of Sikhism. 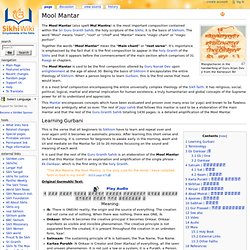 The word "Mool" means "main", "root" or "chief" and "Mantar" means "magic chant" or "magic portion". Together the words "Mool Mantar" mean the "Main chant" or "root verse". It’s importance is emphasised by the fact that it is the first composition to appear in the holy Granth of the Sikhs and that it appears before the commencement of the main section which comprises of 31 Raags or chapters. EK ONG KAR, SAT NAM, SIRI WAHE GURU. Ek Ong Kar Sat Gur Prasad. Waheguru simran. The Guru Gaitri Meditation.