15 Labor, Delivery And Postpartum Photos That Capture The Beauty Of Birth. A Beautiful Body Project. Peaceful parenting: A Man's Guide to Homebirth. Photo courtesy of Natural Blessings Doula Services and ©2009 Sandi Heinrich Photography Josh's first skin-to-skin with his fresh, newborn sonborn gently into water at home When my wife decided to have an unassisted homebirth - she did her best to furnish me with the best reading and preparatory material that was available. 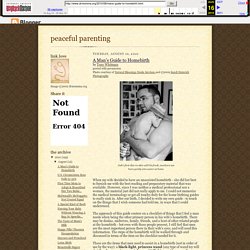 However, since I was neither a medical professional nor a woman, the material just did not really apply to me. I could not memorize the medical terminology or get all touchy-feely for the home birthing guides to really sink in. Baby’s First Bacteria Depend on Birth Route. By Rachel Ehrenberg, Science News It’s the journey, not the destination,that determines the quality of bacteria a newborn encounters in life’s first moments. 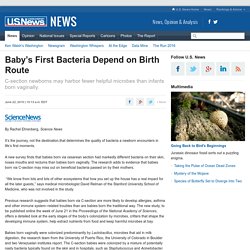 A new survey finds that babies born via cesarean section had markedly different bacteria on their skin, noses mouths and rectums than babies born vaginally. The research adds to evidence that babies born via C-section may miss out on beneficial bacteria passed on by their mothers. “We know from lots and lots of other ecosystems that how you set up the house has a real impact for all the later guests,” says medical microbiologist David Relman of the Stanford University School of Medicine, who was not involved in the study. Previous research suggests that babies born via C-section are more likely to develop allergies, asthma and other immune system–related troubles than are babies born the traditional way. Comment utiliser l'acupression pour commencer le travail (accouchement) Étapes Partie 1 sur 3: Comprendre l'acupression <img alt="Use Acupressure to Induce Labour Step 1 Version 2.jpg" src=" width="670" height="503">1Familiarisez-vous avec le concept d'acupression. 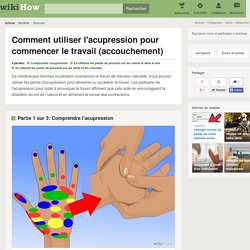 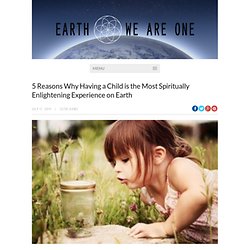 In fact, that’s what everyone told me. “It’s so hard but it’s so worth it.” “Your heart will be walking around outside of you forever.” When you are soon to become a parent, you hear these common adages and statements over and over. As a mother- or a father-to-be, you are bound to go through one thousand emotions and transformations. Everything they say is true…but in ways you couldn’t have imagined. Call the Aztec Midwife: Childbirth in the 16th Century. This story appears in the January/February 2017 issue of National Geographic History magazine. 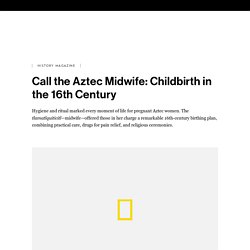 Where do babies come from? The Aztecs’ answer to the classic child’s question was that they came from the 13th heaven—the highest heaven of all. Motherhood Rooted. Illustration by Alija Craycroft Written by Momo Chang Photos by Damien Maloney. 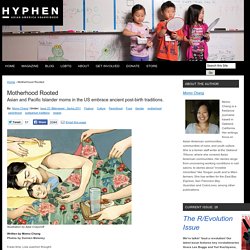 Birth Traditions. Birth, the first of the turning points in life, is almost always regarded as a happy event, in Turkey as in the rest of the world. 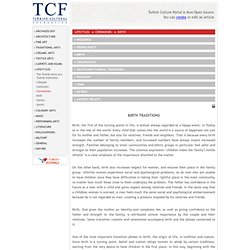 Every child that comes into the world is a source of happiness not just for its mother and father, but also for relatives, friends and neighbors. That is because every birth increases the number of family members, and increased numbers have always meant increased strength. Families belonging to small communities and ethnic groups in particular feel safer and stronger as their population increases. The common expression ‘children make the family’s kettle whistle’ is a clear emphasis of the importance attached to the matter. Which Tradition is Right for You? Cultural traditions and customs around the world surround the placenta. For centuries the placenta has received ceremonial handling by many cultures around the world. 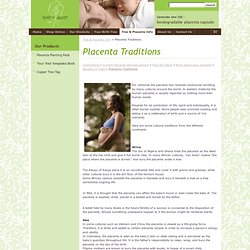 In western medicine the human placenta is usually regarded as nothing more than human waste. Revered for its symbolism of life, spirit and individuality, it is often buried outside. Some people even promote cooking and eating it as a celebration of birth and a source of rich nutrients. Placenta History - Independent Placenta Encapsulation Network. The most popular placenta encapsulation process used widely around the world today is based on Traditional Chinese Medicine (TCM) techniques, where the placenta is considered a powerful and sacred medicine – a ‘full of life force’ organ that should be consumed to support a healing mother after birth. 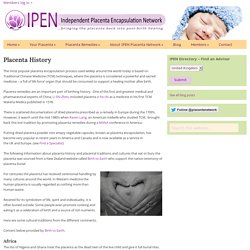 Placenta remedies are an important part of birthing history. ‘Wait for eight’ delayed bathing helps newborns thrive. By Katie Kerwin McCrimmon LAFAYETTE — When Amy Toner had to have a cesarean section for the birth of her first baby, she worried about the precious moments immediately after the birth. 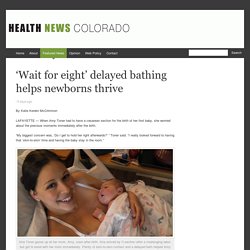 Placenta in TCM - Independent Placenta Encapsulation Network. Li Shizhen first wrote about placenta as a medicine in the 1500′s when he compiled the first Materia Medica on Traditional Chinese Medicine. Dried placenta has been used widely ever since for many different symptoms. Placenta ‘augments the Essence’ in TCM. Translation: Placenta makes greater/stronger the vital force of an individual. Placental Remedy. Crown Ascension. Energetic Gifts of Lotus Birth. Treatment of the Sacred Cord and Placenta: Delayed Cord Clamping and Lotus Birth in Bali. Male seahorse giving birth at The Deep Hull. Parto Orgásmico (Sim, é possível!) - Completo.

Dolphin Midwives and Underwater Birthing. Birth Without Violence - Part One. This website has not been updated for some years.