G4S Admits It Guards Dakota Pipeline as Protesters Get Attacked. G4S, a U.K. 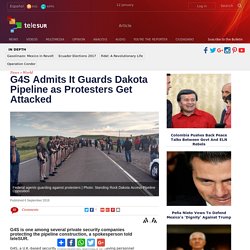 -based security multinational, admitted to having personnel deployed at “remote sites” where Native Americans are defending their lands from the planned US$3.8-million Dakota Access pipeline that they say would pollute the drinking water of millions. ANALYSIS:4 Reasons It’s No Coincidence Orlando Shooter Worked for G4S The actions have brought together over 200 tribes in solidarity and faced a heavy offensive by private security companies and state officers deployed under a state of emergency. The security company has been under fire for providing services to Israeli prisons and settlements, expanding across the Middle East including Afghanistan and Iraq and operating juvenile detention centers and handling deportations from the U.S. In an email to teleSUR, G4S Communications Director Monica Lewman-Garcia wrote, “G4S Secure Solutions is providing fewer than 10 security officers, assigned to remote sites, providing limited short-term unarmed patrol services.”

Meet G4S, the Contractors Who Go Where Governments and Armies Can’t—or Won’t. I. 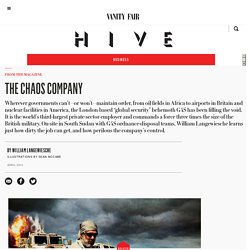 Death on the Nile Late last fall, at the start of the dry season in the new country called South Sudan, a soldier of fortune named Pierre Booyse led a de-mining team westward from the capital city, Juba, intending to spend weeks unarmed in the remote and dangerous bush. Booyse, 49, is an easygoing Afrikaner and ordnance expert who was once the youngest colonel in the South African Army. He has a full gray beard that makes him look quite unlike a military man.

After leaving the army he opened a bedding store in Cape Town, where he became the leading Sealy Posturepedic dealer, then opened a sports bar too, before selling both businesses in order to salvage his marriage and provide a better environment for his young daughter. G4S is based near London and is traded on the stock exchange there. Four miles out of town, Booyse’s car broke down, and Booyse radioed for help. The market is called Souk Sita. Booyse arrived at Souk Sita at 3:30 P.M., five hours after the explosion. II. III. IV. G4S - Securing Your World. Security Firm Guarding Dakota Pipeline Used Psychological Warfare Tactics for BP. Photo courtesy of Democracy Now! 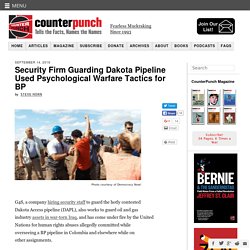 G4S, a company hiring security staff to guard the hotly contested Dakota Access pipeline (DAPL), also works to guard oil and gas industry assets in war-torn Iraq, and has come under fire by the United Nations for human rights abuses allegedly committed while overseeing a BP pipeline in Colombia and elsewhere while on other assignments. Recently, the UK-based G4S placed job advertisements on its website, announcing it would be hiring security teams to work out of offices in Mandan and Bismarck, North Dakota. These two locales are only a 45-minute drive away from the ongoing Standing Rock Sioux Tribe-led encampment unfolding along DAPL‘s route in Cannon Ball, North Dakota.

First among the list of required experience for both locations is service related to military police, elite military forces, or “any support role in a combat zone.” G4S Admits It Guards Dakota Pipeline as Protesters Get Attacked. G4S fined 100 times since 2010 for breaching prison contracts. G4S has been fined at least 100 times for breaching its contracts to run prisons since 2010, according to data obtained by Labour. 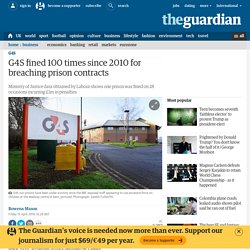 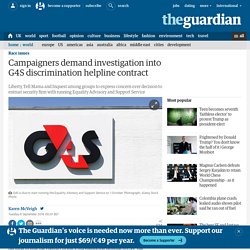 A number of organisations, including Liberty, Tell Mama and Inquest, have written to Harriet Harman, the chair of the joint committee on human rights, and Maria Miller, the chair of the women and equalities select committee, to express “profound concern” over the awarding of the contract to run the Equality Advisory and Support Service (EASS) to G4S. Nice work: G4S wins $118 million Guantánamo contract. G4S, the UK government outsourcer that supports Israeli security services on the West Bank, will serve Guantánamo Bay Naval Base. 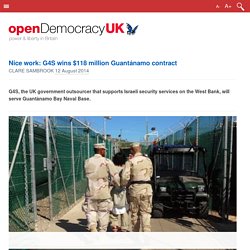 Security company G4S has won a $118 million contract to supply Guantánamo Bay, the US military base in Cuba where the US government unlawfully detains 149 alleged terrorists. The contract news was posted in Monday’s edition of the daily bulletin from the US Department of Defense. G4S Government Solutions will get $24.4 million-a-year to supply Guantánamo Bay Naval Base with ‘custodial services’ as well as family housing, grounds maintenance, refuse services and water. Managers at G4S-run Medway youth jail paid bonuses despite failings. Senior managers at a privately run children’s jail received bonuses this year despite the prison being taken out of their hands following allegations of abuse. 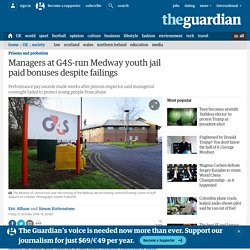 The managers received performance-related pay awards in April, weeks after the chief inspector of prisons said that “managerial oversight failed to protect young people from harm at the jail”. Eight former staff currently face criminal charges. G4S shares plunge after Orlando killer is named as employee. Shares in G4S have fallen heavily after the UK security services company said Omar Mateen, who killed 49 people at a gay nightclub in Orlando, Florida, was an employee. 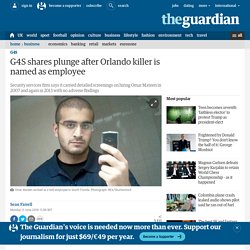 G4S, the world’s biggest security firm, said it had employed Mateen since September 2007 and that he was off duty when he carried out the deadliest mass shooting in US history on Sunday morning. The company carried out detailed screenings on Mateen when he was employed and again as recently as 2013 “with no adverse findings”, G4S said in a statement. He had been working at a residential community in South Florida. Mateen was interviewed three times by the FBI in 2013 and 2014 following separate reports of extremist behaviour and connections to terrorism that were ultimately judged to be insubstantial.