The Art of Branding by Guy Kawasaki. A Short Introduction to Growth Hacking. Over the past few years, you’ve likely heard the term ‘growth hacking’ being thrown around, but what exactly is growth hacking, and how is it different from plain old ‘marketing’? 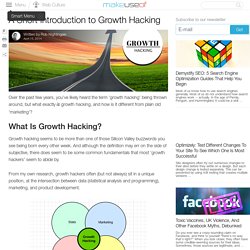 What Is Growth Hacking? Growth hacking seems to be more than one of those Silicon Valley buzzwords you see being born every other week. And although the definition may err on the side of subjective, there does seem to be some common fundamentals that most ‘growth hackers’ seem to abide by. From my own research, growth hackers often (but not always) sit in a unique position, at the intersection between data (statistical analysis and programming), marketing, and product development.

When speaking with MakeUseOf writer Matthew Hughes about his understanding of the term, he said that to him ‘growth hacking is the process of attracting users by taking an analytical look at the platform, marketing, and the users’. How Does Growth Hacking Differ From Marketing? What Kind of Tactics Are We Talking? Other Resources Conclusion. 6 Free Social Media Guides All Business Owners Should Read.

If you run a business and want to take your social-media efforts to the next level while running , here are six white-papers/PDF reports you’ll want to take a look at. 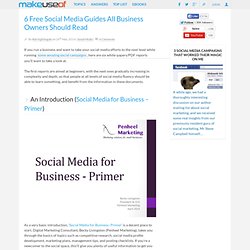 Mashable. Most brands, by now, recognize the power of social media and understand it's not just a passing fad. 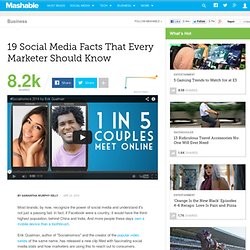 In fact, if Facebook were a country, it would have the third-highest population, behind China and India. And more people these days own a mobile device than a toothbrush. Erik Qualman, author of "Socialnomics" and the creator of the popular video series of the same name, has released a new clip filled with fascinating social media stats and how marketers are using this to reach out to consumers. While brands seek out their "Oreo"-moment with real-time marketing messages, they're now looking beyond just Facebook and Twitter. With the rise of Vine, companies are using the platform to promote their own products instead of relying a 30-second commercial spot, which makes sense considering the average human attention span is 7 seconds (just one second less than a goldfish). 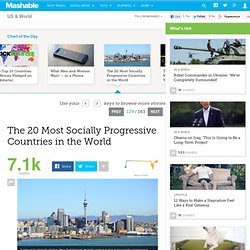 -based non-profit that focuses on advancing global progress, released a new index last week that ranked 132 countries based on a variety of indicators, including basic human needs, foundations of well-being and opportunity. According to the Social Progress Index (SPI) 2014, the most socially progressive country is New Zealand in terms of personal rights and freedom, Internet access and school enrollment. It was followed by Switzerland, Iceland, the Netherlands and Norway. Despite gross domestic product (GDP) rankings, many of the world's largest economies didn't make the SPI's top 10.

The U.S., which has the second-largest GDP per capita on the list, ranked only 16th in social progress due to room for improvement in personal safety, ecosystem sustainability, and tolerance and inclusion. How To Create Perfect Posts For Every Social Platform. Think you can use the same technique to update Twitter as you do with Facebook? 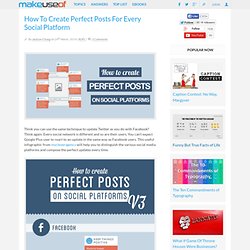 Think again. Every social network is different and so are their users. You can’t expect Google Plus user to react to an update in the same way as Facebook users. We Don’t Sell Saddles Here. The memo below was sent to the team at Tiny Speck, the makers of Slack, on July 31st, 2013. It had been a little under seven months since development began and was two weeks before the launch of Slack’s ‘Preview Release’. It is presented verbatim, as written (including original pull-quotes), with two exceptions: the removal of an introductory section discussing launch logistics and replacement of a link which pointed to an internal company resource with the equivalent public link.

Build Something People Want. 10 Surprising Social Media Statistics That Will Make You Rethink Your Social Strategy. Editor's Note: This is one of the most-read leadership articles of 2013. 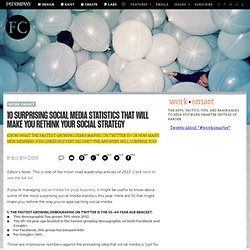 Click here to see the full list. If you’re managing social media for your business, it might be useful to know about some of the most surprising social media statistics this year. Here are 10 that might make you rethink the way you’re approaching social media. 1. The fastest growing demographic on Twitter is the 55–64 year age bracket.

This demographic has grown 79% since 2012. Get It Right: 5 Creative Ways To Promote Your Home Business Online. Running your own home business is in many ways a dream job. 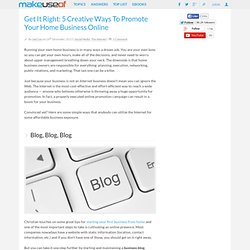 You are your own boss so you can get your own hours, make all of the decisions, and never need to worry about upper management breathing down your neck. The downside is that home business owners are responsible for everything: planning, execution, networking, public relations, and marketing. How Social Media is Changing Business — And Your Job Search. A decade ago, businesses didn’t have company Facebook profiles, Twitter accounts, or Instagram feeds. In fact, Facebook didn’t exist.