Podcasts/Interviews to Listen to

Seanwes tv 155: Increase Productivity by Planning Out Your Day. Mike Monteiro - "Fuck you pay me" (PT Br) Watch Over 100 Feature Films for Free on the 'Paramount Vault' YouTube Channel. Are you a fan of movies? 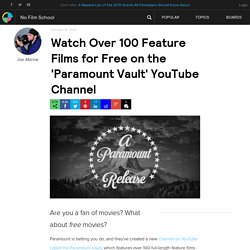 What about free movies? Paramount is betting you do, and they've created a new channel on YouTube called the Paramount Vault, which features over 100 full-length feature films from their archives (though the features only seem to be available in the US at the moment). While a number of these are quite a bit older, with some science fiction B-movies thrown in for good measure, they also have an eclectic mix of newer films.

Introducing Radio Film School, the Filmmaking Podcast We've All Been Waiting For. Podcasting is going through a renaissance of sorts, and the wave of inspiring topical content is making its way into filmmaking territory. 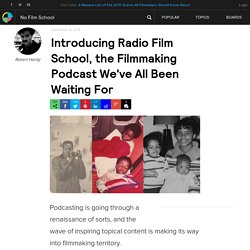 Of course, there have been quite a few podcasts that focus on film news and film criticism, and there have been others that have focused on the technical aspects of filmmaking (the Go Creative Show is a favorite). However, until this month, filmmakers haven't had their own version of This American Life, a show that delves into the personal stories and the intangibles of filmmaking in a way that is both inspiring and informative. Our friend Ron Dawson, who runs Dare Dreamer Media, a Seattle-based company that focuses on the providing topical content based around the art and economics of being an independent creative, recently launched the first two episodes of Radio Film School. DCP 143: Daniel McCarthy - Music Bed — Carl Olson TV. Daniel McCarthy, owner of Music Bed, explains the issues in selecting and licensing quality music. 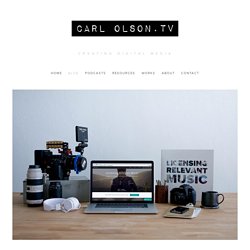 One the greatest artistic challenges for digital filmmakers is finding and legally using music in your video. Sorting out and making sense of the complexity of licensing music requires someone who knows the industry inside and out. What is royalty free? What does managed rights mean? John August & Craig Mazin Break Down How to Write Everything in Your Script (Except the Dialogue) The one element of a screenplay that audiences notice and (usually) attribute to the writer is the dialogue. 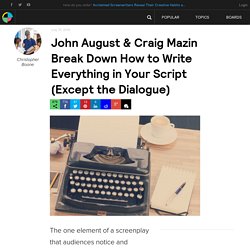 That's because most moviegoers have never read a screenplay and don't understand that dialogue makes up a mere fraction of the words that are necessary to create the world they are watching on the screen. Much of the craft of screenwriting is the economical choice of words and phrases, carefully constructed and arranged on the page, to bring a movie to life in the mind's eye of the reader. And the majority of those words are not dialogue. In a recent episode of the ScriptNotes podcast, screenwriters John August and Craig Mazin look at short excerpts from seven produced screenplays across a variety of genres to break down different styles of how to write everything in a screenplay except the dialogue.

You can listen to the podcast below (the main conversation begins at the 14:12 mark). Young Advice from Master Filmmakers (TARANTINO,WES ANDERSON,SCORSESE,COPPOLA,HERZOG,FELLINI,PTA) 10 TED Talks That All Filmmakers Should Check Out. TED Talks help spread the ideas of the most amazing, creative minds of our generation, including those of our most revered filmmakers and storytellers. 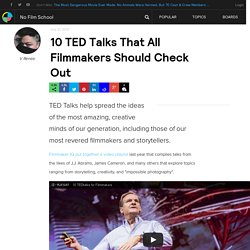 Filmmaker IQ put together a video playlist last year that compiles talks from the likes of J.J. Abrams, James Cameron, and many others that explore topics ranging from storytelling, creativity, and "impossible photography". Bonus (because I love this one): If you've ever wondered why so many fail at storytelling even though we all seem to have a natural tendency to tell stories, here's Julian Friedmann's TEDx Talk that focuses on the "mystery of storytelling.

" If you're in the mood for more, ScreenCraft has shared their own list of filmmaking/storytelling-related TED Talks. Ron Howard: On Filmmaking. J.J. Abrams: On Filmmaking. Christopher Nolan on Aspiring Filmmaker's Responsibility and How Soderbergh Helped Him Figure Out How to Best Work Within a Studio System. During the Director Series that took place during Tribeca 2015, Christopher Nolan talked with Bennett Miller about many topics, including the challenges of becoming risk-averse as your career expands, and how he learned how to deal deal with the Studio System to keep his creative freedom all the while maintaining a sustainable relationship for all parties. 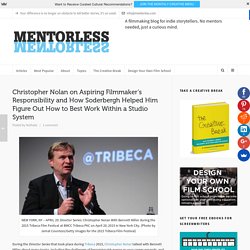 Nolan, whose roots come from the DIY/indie filmmaking philosophy had been in the past very generous about the lessons he had learned making his first feature film. This time, talking to Miller, he opens up about other aspects that are as interesting and insightful. About New Filmmakers’ Responsibility and Energy. Watch Olivia Wilde Discuss Taking on The Role of Producer. Photo: Slaven Vlasic/Getty Images On Thursday, April 16, actress Olivia Wilde (Meadowland), took part in the Tribeca Talks Master Class: The Producers, a free session inside the SVA Theater. 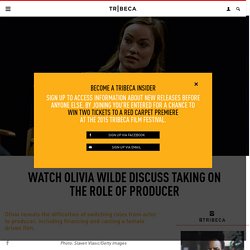 On this panel, we hear from Blue Valentine producer Alex Orlovsky, Beasts of the Southern Wild producer Matt Parker, Meadowland producer and co-star Olivia Wilde, and Bachelorette producer Carly Hugo. Moderating this panel is The Hollywood Reporter’s Tatiana Seigel. Mark Duplass Tips to Handle the "This Is No Good" Voice and Get Your "Vomit Draft" Out. There is a lot to Mark Duplass‘ keynote speech at SXSW, but I’ve decided to start with his tips on writing and dealing with the this is no good voice, the one that can stop you from finishing a screenplay (or anything really). 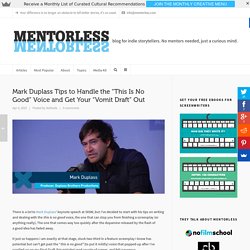 The one that comes way too quickly after the dopamine released by the flash of a good idea has faded away. It just so happens I am exactly at that stage, stuck two-third in a feature screenplay I know has potential but can’t get past the “this is no good” (to put it mildly) voice that popped-up after I’ve scrolled up on my Final Draft (big mistake) read couple of scenes, and felt nauseous. I’m thinking some of you might be in the same situation, and my hope is that you will found Duplass’ no-nonsense, practical tips as helpful as I did. Here are Mark Duplass three tips to move forward with your creative work: Motionographer Motionographer Podcast: Making “Anomaly” Set against the space-race canvas of the 1960’s, Anomaly is inspired by the traditional Christmas Nativity and explores, through a modern-day lens, the events of two-thousand years ago. 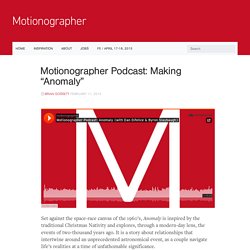 It is a story about relationships that intertwine around an unprecedented astronomical event, as a couple navigate life’s realities at a time of unfathomable significance. In This Retrospective, David Fincher Imparts Some Major Wisdom on Directing Films. David Fincher is one of those filmmakers working today whose work is still as exciting today as it was at the beginning of his career. 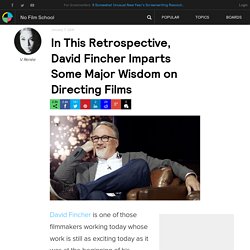 His films offer extreme commentaries on the dark sides of humanity. TWDP 011: Director Christian Schultz from Music Bed - Bridging the Gap. Podcast: Play in new window | Download Subscribe to the Podcast: In this episode of The Wandering DP Podcast we chat with director Christian Schultz from Music Bed about what it takes to put together a Vimeo Staff Pick, how he gets projects done with a small team, and how he managed to brdige the taste/talent gap with his filmmaking. Finding Story, Creating Tension, & Defying Expectations with the 'H.' Filmmakers. A Film School Education in 83 Minutes: An Interview with the 'Beaver Trilogy Part IV' Filmmakers. The Beaver Trilogy is a set of short films made in the 70s and 80s by iconic Utah filmmaker Trent Harris.

Now nearly 40 years later, director Brad Besser (The World of Z) re-explores the pathos of Groovin' Gary and the filmmaker that stumbled upon him. One fateful day in 1979, a kid (who called himself Groovin' Gary) was hanging around a TV station parking lot when Trent Harris was testing a new video camera for the station. What happens afterwards is a bizarre and beautiful character study of a young man whose dreams to be an actor soured after letting Harris too close, too quickly. 'People Who Make Movies Don't Have a Choice': Sundance Shorts Directors Share Advice for Young Filmmakers. Do You Need Connections to Get Into Sundance? These Filmmakers Proved That You Don't.

With Sundance 2015 fast approaching, it's worth taking some time to listen to filmmakers who've been there before. Writer/Director Diane Bell & Producer Chris Byrne took their 2010 film Obselidia to Sundance, where it won the Alfred P. Sloan award and the cinematography award, and was nominated for a Grand Jury prize (it was also nominated for two Independent Spirit Awards). Even though they didn't have any personal connections to the festival, and the movie was submitted on the last possible day, their film was still accepted out of thousands of submissions. Just because their film won awards, however, did not mean that they were automatically given a distribution deal. Learn How Joss Whedon Approaches Story, Writing & Directing in 10 Minutes.

Long before Joss Whedon took the helm of The Avengers and steered the Marvel franchise to the second highest box office grossing film of all time, before Buffy and Firefly, he left his job at a video store to start his first writing gig on the sitcom Roseanne. That is where Joss Whedon learned his craft on the job. Coming from a long line of television writers may have predisposed Joss Whedon to writing for television and film, but he didn't realize his love for writing until after he graduated from college. An Argument Against Formulas (Or Why Scott Myers is My New Hero)

With a single blog post, Scott Myers, has become my screenwriting hero. Spend 40 Illuminating Minutes with Steven Soderbergh as He Talks About Low-Budget Filmmaking. Steven Soderbergh might be known for his big budget Oceans series, which has more stars in it than Andromeda, but his low-budget work truly showcases his mettle as a seriously creative director. Below is almost 40 minutes of Soderbergh and Mark Romanek talking about making his low-budget feature, Bubble, which was the film that came right after he finished Ocean's Twelve.

Advice from Director William Friedkin: 'Leave Film School' & Study Alfred Hitchcock. Oscar-winner William Friedkin, director of The French Connection and the greatest scary movie to ever grace the cinematic world (um -- in my opinion), The Exorcist, has quite the reputation in the industry. Ramit Sethi on Persuasion and Turning a Blog Into a Multi-Million-Dollar Business. Robert Redford on the History and Future of Film at Sundance. And so it begins: at the Day One Press Conference today at the 2015 Sundance Film Festival, Sundance Institute Executive Director Keri Putnam, Festival Director John Cooper, and founder Robert Redford took to the stage to reflect on the history and future of the celebrated film festival. Listen to 2 Solid Hours of Paul Thomas Anderson Discussing Every One of His Films. The Insider View Presented By Final Draft : Final Draft Insider View with Screenwriters Mark Heyman and Craig Johnson.

‘The Skeleton Twins’ Co-Writers Explain How Tone Made Their Indie Gem Work (& Hard to Finance) FILMMAKER PASS: Four Different Directors Share Their Advice & Lessons Learned. Enter Screencraft's Screenwriting Fellowship & Win a Trip to LA for Top-Level Meetings. WATCHED. Interview with Jon Foreman of Switchfoot. Christopher Nolan Shares DIY Shooting Tricks of His No-Budget First Film, 'Following' Get The Guy » How To Handle Stress Like A Spartan… How Often Should You Practice, and How? - Q&A #2.