Pro Tip: HOW TO SLATE. Panasonic GH4 V2.0 Firmware Opens Up Taller Aspect Ratios for 4K & Above Anamorphic Shooting. While you can shoot with whatever kind of anamorphic lens you want on the Panasonic GH4 assuming it covers the sensor, many of them will not give you a proper aspect ratio without cropping a ton. 1.3X anamorphics have been popular because they take 16:9 and make it the correct wider aspect ratio, but the anamorphic effect isn't as strong as 2X anamorphics. 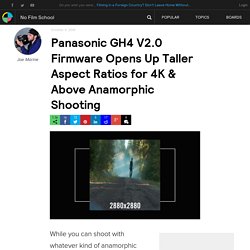 How To Shoot Outside With Modifiers. SMAPP Series (2013) 4 Ways You Can Save Time in Post by Shooting for the Edit. Don't work hard. 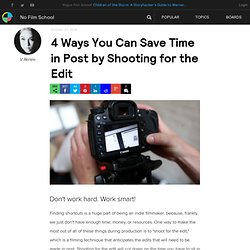 Work smart! Finding shortcuts is a huge part of being an indie filmmaker, because, frankly, we just don't have enough time, money, or resources. One way to make the most out of all of these things during production is to "shoot for the edit," which is a filming technique that anticipates the edits that will need to be made in post. Shooting for the edit will cut down on the time you have to sit in an editing bay (or on your couch with your laptop -- whatever), and will basically make your life a whole lot easier. Chris Lavigne of Wistia shares some excellent tips on how to shoot for the edit in the video below: If you've made a lot of videos as a one-man/woman show -- writing, shooting, and editing everything by yourself -- then you've probably gotten really used to shooting for the edit, because you probably have a good idea of which takes worked, which ones didn't, as well as how you're going to put it all together editing.

The easy way to shoot food from overhead. This is what I drink every morning. 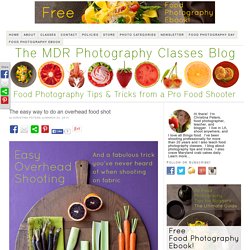 The juice of carrots, an apple, an orange (preferably blood orange), half a large cucumber, celery, and one veggie not shown, two leaves of Dino kale (I forgot them in the fridge when shooting!) I put them all in a juicer and get about 16-20 oz of this tasty concoction. Its so tasty and so healthy I wanted to do a post in homage to my morning juice – the easy way to do an overhead head shot. Yes, those are purple carrots on the left. Overhead food photography is a great way to make a very graphic image about your recipe. How Camera Placement Relates To Your Story, SMAPP Series (2013) 5 Skills You Should Learn If You Want to Be a Major Filmmaking Asset. A Primer on Focal Length: Why Lenses Are One of the Most Powerful Tools at Our Disposal.

Of the many complex aesthetic decisions that cinematographers make, lens choice is one of the simplest, most powerful, and most misunderstood. 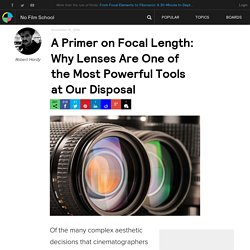 There are several different factors that determine the aesthetic of any given lens, but today we're just going to be focusing on the basics. Focal length is one of the more straight-forward aspects of lens design. In the simplest sense, focal length is the physical distance between the imaging plane (ie. the sensor) and the optical center of the lens. Focal length values - which are expressed in millimeters - are basic measurements of how wide or zoomed-in a particular lens is. WATCHED. Filtration Basics: Cost, Uses, & Filters You Should Never Leave Home Without.

Using filters can help give your images subtle improvements and changes that are otherwise difficult to capture and repeat consistently in post. 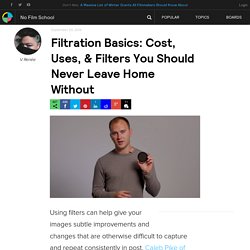 Canon 5D Mark II Basics 101. Working with Less (or, Get Out There and Shoot!) Part 1. Ok, maybe that photo was a little over the top. 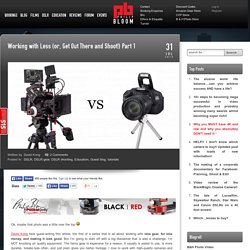 Working with Less Part 2: All about the Camera. Viewer question: How did I approach the shoot? 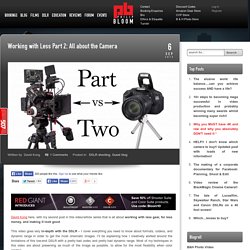 How much did I plan? Viewer question: Did I get signed release forms from everyone in the film? Working with Less Part 3: Magic Lantern. 9 Cinematography Tips for Directors with No Space & No Budget. Over the past few years I've contributed articles focused on my experience independently promoting and distributing my previous two features, The Graduates and Turtle Hill, Brooklyn. 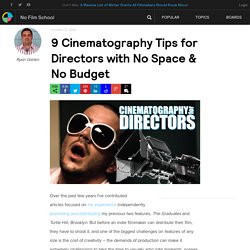 But before an indie filmmaker can distribute their film, they have to shoot it, and one of the biggest challenges on features of any size is the cost of creativity -- the demands of production can make it extremely challenging to take the time to visually articulate moments, scenes, sequences and themes the way you dreamed up in pre-production. On my most recent feature, Drinking Games, we faced this challenge constantly -- we made the suspense-filled drama for under $100,000 in twelve days, on location inside a real dormitory.

My cinematographer Andrew "Tank" Rivara had to light tiny rooms for the RED, while the budget and the clock were working against us from the beginning! How did we create a film look on a low budget? 10 Tips for Freelance Filmmakers. A Beginner's Guide to Shooting Outside: 5 Things You Shouldn't Leave Home Without. If you're new to filmmaking and taking your production outdoors, here are 5 excellent pieces of advice to consider. 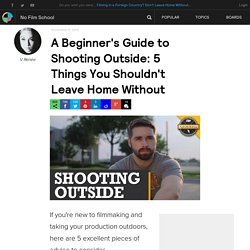 Six Tips For How To Best Shoot Handheld. SMAPP Series (2013)