Someone asked about his body issues, and it made me wonder why he has them. Men are targeted by body-image messaging too. 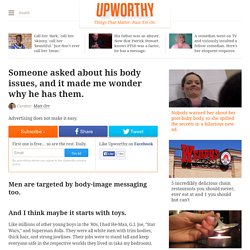 And I think maybe it starts with toys. Like millions of other young boys in the '80s, I had He-Man, G.I. Joe, "Star Wars," and Superman dolls. They were all white men with trim bodies, thick hair, and strong jawlines. Their jobs were to stand tall and keep everyone safe in the respective worlds they lived in (aka my bedroom). Toys were setting the "man body ideal" in the '80s. ...that is, for men who ran around fighting crime, because crime fighting is probably great exercise. See, this original Batman doll looks pretty average: But holy Crossfit, Batman!

I mean, I'm glad they did something with the outfit 'cause it looks totally badass. But why did you become an unrealistically *ripped* Batman? You were perfectly good at fighting crime before (even with your silly spray-can weapon). The Batman franchise was not the only body-changing switcheroo. Above is a screen shot of a search for male dolls. Chris Thompson agrees with me. His video is below. Chelsea Peretti. Early life[edit] Peretti was born and raised in Oakland, California,[4] the daughter of an Italian American father and Jewish mother.[5][6] Peretti attended The College Preparatory School in Oakland. 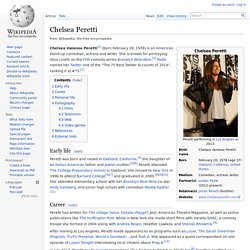 She moved to New York in 1996 to attend Barnard College[4][7] and graduated in 2000.[8][9][10] She attended elementary school with her Brooklyn Nine-Nine co-star Andy Samberg, and junior high school with comedian Moshe Kasher.[11] Career[edit] She has made several guest appearances on podcasts including Doug Loves Movies, How Did This Get Made? , You Made It Weird with Pete Holmes, The Todd Glass Show, The Lavender Hour, The Bone Zone with Brendon Walsh and Randy Liedtke, and Comedy Bang Bang. Peretti guest-starred in the Comedy Central series Kroll Show as Farley, a love interest of Bobby Bottleservice.[15] As of 2013, Peretti has been a series regular on Fox's detective comedy Brooklyn Nine-Nine playing Gina Linetti.[16] Personal life[edit] Atteindre ses ambitions, suivre ses passions, garder son inspiration. I Have An Invisible Illness – Here's Why You Shouldn't Tell Me I Look Good.

Shirley Bassey - If You Go Away / Rod McKuen - Love's Been Good To Me (1976 Show #6) Huffingtonpost. 35 Bill Cosby Accusers Tell Their Stories. More has changed in the past few years for women who allege rape than in all the decades since the women’s movement began. 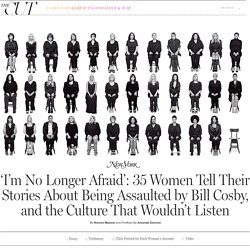 Consider the evidence of October 2014, when a Philadelphia magazine reporter at a Hannibal Buress show uploaded a clip of the comedian talking about Bill Cosby: “He gets on TV, ‘Pull your pants up, black people … I can talk down to you because I had a successful sitcom.’ Yeah, but you rape women, Bill Cosby, so turn the crazy down a couple notches … I guess I want to just at least make it weird for you to watch Cosby Show reruns. Dude’s image, for the most part, it’s fucking public Teflon image. I’ve done this bit onstage and people think I’m making it up … That shit is upsetting.” The bit went viral swiftly, with irreversible, calamitous consequences for Cosby’s reputation. Perhaps the most shocking thing wasn’t that Buress had called Cosby a rapist; it was that the world had actually heard him.

Read her story Name: Beverly Johnson Age: 62. Ronda Rousey Is Unstoppable. The video clip is now a cherished part of the Ronda Rousey origin story: Head-shaven Ultimate Fighting Championship impresario Dana White, walking out of the Mr Chow restaurant in Hollywood in 2011, swamped by paparazzi, who begin grilling him about the latest gossip from the octagon. 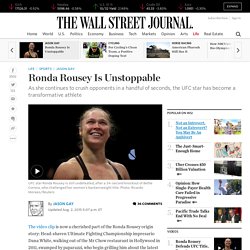 White good-naturedly trades fight talk (“That was the sickest kick in MMA history!”) And answers questions as he searches for his waiting SUV. Before he departs, there’s a final query: When are we going to see women in the UFC? How Seeing Greta Garbo Naked Shifted Jane Fonda's View Of 'Perfection' Serena Williams. Venus Williams. Un article de Wikipédia, l'encyclopédie libre. 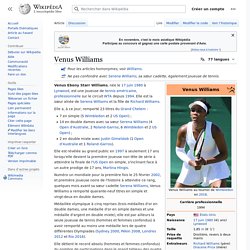