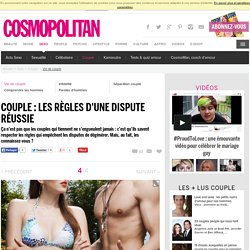 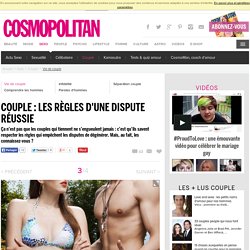 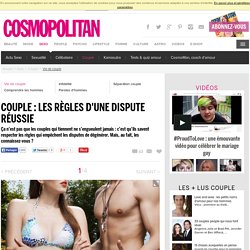 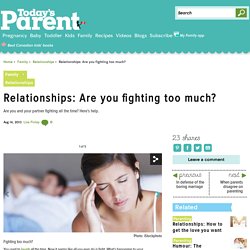 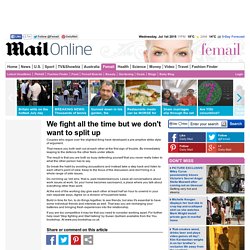 That means you both lash out at each other at the first sign of trouble. By immediately leaping to the defence the other feels under attack. The result is that you are both so busy defending yourself that you never really listen to what the other person has to say. So break the habit by avoiding accusations and instead take a step back and listen to each other's point of view. Keep to the focus of the discussion and don't bring in a whole range of side issues. Do not bring up 'old sins,' that is, past misdemeanours. At the end of the working day give each other at least half an hour to unwind in your own separate ways. Build in time for fun, to do things together, to see friends, but also it's essential to have some individual friends and interests as well.

21 Ways to Stop Constant Fighting in a Relationship ... → Love. 8 Rules You MUST Follow When Fighting In Your Marriage. Fighting is normal in a relationship. 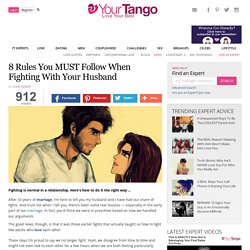 Here's how to do it the right way ... After 33 years of marriage, I'm here to tell you my husband and I have had our share of fights. And trust me when I tell you, there's been some real doozies — especially in the early part of our marriage. Why arguing is good for your relationship - eHarmony Dating Advice. By Dr. 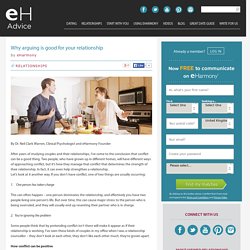 Neil Clark Warren, Clinical Psychologist and eHarmony Founder After years of studying couples and their relationships, I’ve come to the conclusion that conflict can be a good thing. Two people, who have grown up in different homes, will have different ways of approaching conflict, but it’s how they manage that conflict that determines the strength of their relationship. Is Arguing The Key To A Long And Happy Relationship? Arguing once a week could be the secret to a long and healthy relationship, according to a new survey - as long as they are mild spats and not abusive rows. 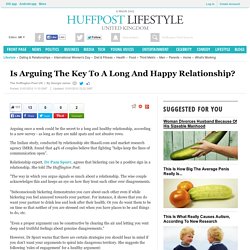 The Indian study, conducted by relationship site Shaadi.com and market research agency IMRB, found that 44% of couples believe that fighting “helps keep the lines of communication open”. Relationship expert, Dr Pam Spurr, agrees that bickering can be a positive sign in a relationship. Can arguing be a good sign. When people think of arguing, they look at it as a negative part of a relationship. 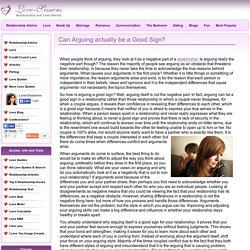 Is arguing really the negative part though? The reason the majority of people see arguing as an obstacle that threatens their relationship, is because they never take the time to acknowledge the true reasons behind arguments. What causes your arguments in the first place? 7 Keys to a Healthy and Happy Relationship. Why Arguments Are Good For A Relationship (If You Follow These 4 Steps) Within romantic relationships, arguing is seen a bad thing. 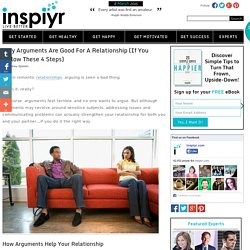 But is it, really? Of course, arguments feel terrible, and no one wants to argue. Why Arguing In Relationships Isn't All That Bad - Blush. We hear it a lot. It’s the age old question that we think holds the answer to whether or not our current relationship is “the one.” While some relationships are definitely too dramatic to survive an I-35 road trip, others are healthy as a horse even with lots of squabbles. I mean without arguments, life would be kind of boring. Is arguing healthy for a relationship? YES. Arguing is necessary for any relationship. A Discussion On Why Arguing Is Pointless. 10 Signs of a Pointless Argument. What would it take for you to realize you’re in the middle of another pointless argument?

In our five years together so far, Kyle and I have had hundreds (thousands?) Of stupid arguments. We’ve argued about everything from why he took the good GameCube controller to why my taste in furniture is so “girly.” When you’re in the middle of one of these arguments, deep down you know that it’s going nowhere and that it doesn’t matter in the long run. But you try to talk yourself out believing that. You’re angry at your husband in general, not just about the issue at hand.You can’t believe he doesn’t understand or agree with what you’re saying.Deep down, you really want to quit arguing, but that would be much too easy.You start thinking that your husband drives you crazy all the time.You forget what you were arguing about in the first place.You keep asking questions like “When was the last time you did [insert thing you're arguing about]?” I’m sure you could add your own additions to the list.

Arguing Is Pointless. Posted on Harvard Business Review: February 8, 2011 11:47 AM It was lunchtime and the seven of us—two kids and five adults—would be in the car for the next three hours as we drove from New York City to upstate Connecticut for the weekend. We decided to get some takeout at a place on the corner of 88th and Broadway. I pulled along the curb and ran in to get everyone's orders.

In no time, Isabelle, my eight year old, came running in the restaurant. Arguing is not pointless… February 11, 2011 by Tim van Gelder In Arguing is pointless Peter Bregman, argues (note: argues) that arguing is pointless, on the grounds that arguing can be counterproductive or ineffective. Indeed it can. His recommended alternative is to just listen. But of course if everyone just listened, then nobody would be making any useful contribution to the resolution of important issues through rational dialogue.

The sensible point in the vicinity of Bregman’s muddleheaded musings is that arguing, if it is to be productive, must be done tactfully. There was another Bookish Lad in the Town, John Collins by Name, with whom I was intimately acquainted. While I was intent on improving my Language, I met with an English Grammar (I think it was Greenwood’s), at the End of which there were two little Sketches of the Arts ofRhetoric and Logic, the latter finishing with a specimen of a dispute in the Socratic Method. Arguing is pointless - Social Anxiety Forum. Here's what the standard format of most Internet debates looks like:Stick man!

Ad hoc fallacy! Appeal to authority! No, you're wrong! Socialist! Is arguing pointless? Arguing for the Sake of Arguing: Pointless Debates. Ah, the never ending debates. There’s no way to escape them and it’s become annoyingly obvious that there is absolutely no stopping them. (My apologies by the way- I know it’s been a while since I’ve updated with anything but a photo challenge or a rant. I actually have a nice lengthy DIY post lined up but I’m fired up with resent debate ridiculousness and I need to get a few things off my chest. Stay tuned for my Pintrest inspired (or Pinspired as I like to call it) post next week.) Back to the subject at hand, debates. The funny (and pointless) thing about “debates” these days is that they serve absolutely no purpose except they give us something to argue about, more time is spent having Side A tell Side B why they’re wrong through belittlement than discussing the actual topic.

Let’s dive into some of these issues with as much of an unbiased attitude as possible. What it’s about: Obviously, abortion. Is Arguing Pointless? Arguing Is Pointless. It was lunchtime and the seven of us — two kids and five adults — would be in the car for the next three hours as we drove from New York City to upstate Connecticut for the weekend. We decided to get some takeout at a place on the corner of 88th and Broadway. I pulled along the curb and ran in to get everyone’s orders. In no time, Isabelle, my eight year old, came running in the restaurant.

“Daddy! Come quick! I can't seem to stop arguing with my partner. What can we do? Although they can be painful and unpleasant arguments are common in all kinds of relationships. GROWING UP SMART: Arguing (Bad Habit #42) To argue, from the Latin argutari, “prattle,” means to exchange or express divergent or opposite views, typically in a heated or angry way. You can argue someone into or out of something. And you can argue the point. Here, we’re talking about a good old-fashioned argument when two people stand toe-to-toe and let each other have it. People don’t always get along, nor do they always see eye-to-eye. Why arguing can be healthy for a marriage - Today HIDDEN - Valentine's Guide. Q: My husband and I argue a lot. One of us always ends up storming out of the room and nothing gets resolved. Arguing Can Make Your Relationship Healthier. How to Stop Arguing and Actually Solve Your Relationship Problems. Arguing Is Bad For Your Health. 3 Good things about arguing. Why is Arguing Bad?

7 Reasons Why Fighting Is Good For Your Relationship - Are Fights Ever Good for a Relationship? One of my biggest goals in life is to prove my friend Margaret from work wrong, and beat her in every single argument we ever have. We know so much about one another, it makes it easy for us to pick on each other and find advantages in battle. The sad thing is that when new employees join our group, they always assume: "Either they hate each other, or they are dating.

" It's weird that people can find such a fine line between hatred and dating, but I know plenty of couples who enjoy picking on each other in a playful manner. Then there are real arguments and fights. These are the ones that I wonder about. Is arguing good for a relationship? Arguing Can Be Good for a Relationship...When It's Done Constructively. Arguing and Relationships. Is Arguing Healthy or Is It the Great Relationship Killer? 4 Strategies to Stop Arguing. Arguing for Intimacy. 3 Ways Arguing Can Be Good For Your Relationship.