The Writer’s Toolbox - Faculty Articles - Gotham Writers Workshop. By Justin Kramon Like many anti-social addictions, writing requires time and financial support, both of which can be difficult to come by in an artistic career. 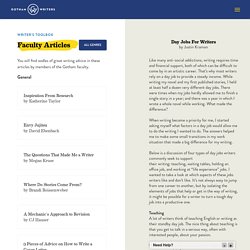 That’s why most writers rely on a day job to provide a steady income. While writing my novel and my first published stories, I held at least half a dozen very different day jobs. There were times when my jobs hardly allowed me to finish a single story in a year; and there was a year in which I wrote a whole novel while working. What made the difference? This article originally appeared in The Writer magazine.

How to Patent Inventions – Inventors and Patent Laws. 4. 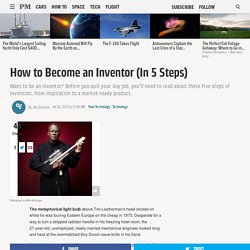 Test the Market Once the patent application is complete, the inventor must switch from building an idea to building a business. Rare is the creative genius behind an invention who also has the business chops—or the interest—to oversee the manufacture, marketing and selling of his creation. So even the brightest creative minds can fall victim to the numerous scams and questionable invention-promotion firms whose ads litter the Internet. Most professional inventors urge caution with any outfit that asks for money up front to shop your ideas around. A safer route when you're in the thickets is to find a partner whose skill set complements yours.

With a solid business team set up, the next step is market research and test marketing. Salazar is a big believer in showing your wares at trade shows. 5. Inventors make money in two ways: collecting royalties by licensing the right to manufacture their invention or manufacturing, distributing and marketing the invention themselves. 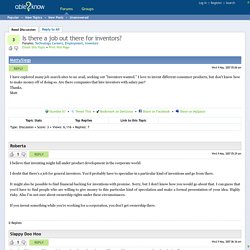 MattySiegs wrote: I have explored many job search sites to no avail, seeking out "Inventors wanted. " I love to invent different consumer products, but don't know how to make money off of doing so. Are there companies that hire inventors with salary pay? Thanks, Matt The job you're looking for is usually going to be called either designer, developer or engineer. In general, companies are going to want your creative energies to be at least a little bit channeled, e. g. if you work for a toy company, they want you inventing toys, not new types of brake linings or whatever. My father is an inventor with several patents but he is also an engineer. If you do not have formal training, I suggest at least a little training in mechanics, simply to see how things work -- and why they don't. As for who owns the patents, Dad only owns one or two of them because he got them after he retired and he was technically no longer working for a company.

Careers for Philosophy Majors. What sort of careers do philosophy majors choose? 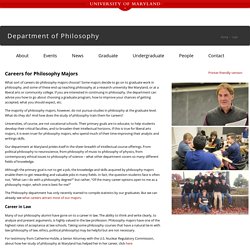 Some majors decide to go on to graduate work in philosophy, and some of these end up teaching philosophy at a research university like Maryland, or at a liberal arts or community college. If you are interested in continuing in philosophy, the department can advise you how to go about choosing a graduate program, how to improve your chances of getting accepted, what you should expect, etc. The majority of philosophy majors, however, do not pursue studies in philosophy at the graduate level. What do they do? And how does the study of philosophy train them for careers? Universities, of course, are not vocational schools. Our department at Maryland prides itself in the sheer breadth of intellectual course offerings. Although the primary goal is not to get a job, the knowledge and skills acquired by philosophy majors enable them to get rewarding and valuable jobs in many fields. 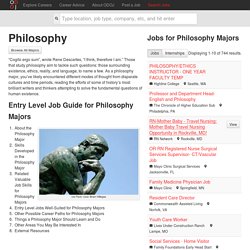