Thousands of Swedes Are Choosing to Have Microchips Inserted Into Their Bodies. Here's Why. How The Tech Evolution is Leaving Teachers Behind. The use of technology in the classroom has steadily gained traction over the past decade. 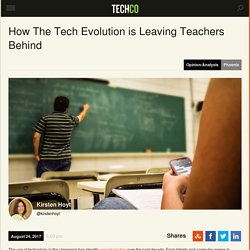 From tablets and computer games to social media, school systems across the country have identified technology as a unique resource for learning. With the first generation of digital natives ― or individuals born after the widespread adoption of technology ― now populating K-12 schools, it is important that teachers understand how to most effectively use technology in order to best help students learn. According to a University of Phoenix College of Education survey, nearly all K-12 teachers said educational technology like laptops, SMART Boards and apps, are being used in schools. Unfortunately, the survey also found that nearly one in five of those surveyed feel intimidated by students’ knowledge of tech devices, and only one in four have had significant training in integrating technology into the classroom. 4 Reasons Why Minecraft Is Great for Teaching Kids Coding Progress Starts With Teachers. Twitter Helps Teachers Develop Professional Learning Communities. 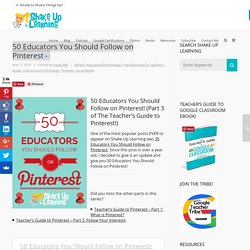 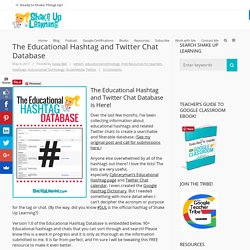 Over the last few months, I’ve been collecting information about educational hashtags and related Twitter chats to create a searchable and filterable database. (See my original post and call for submissions here.) Anyone else overwhelmed by all of the hashtags out there? I love the lists! Version 1.0 of the Educational Hashtag Database is embedded below. 90+ Educational hashtags and chats that you can sort through and search! Mastodon, Twitter and publics. Long ago, I wrote about the theory of social sites, with the then-young Twitter as the exemplar. 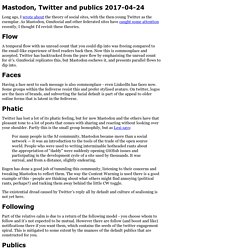 As Mastodon, GnuSocial and other federated sites have caught some attention recently, I thought I'd revisit these theories. Flow A temporal flow with no unread count that you could dip into was freeing compared to the email-like experience of feed readers back then. 7 Questions That Lead to an 'Aha Moment', According to Research. 8 Important Tips on How to Create Engaging Assignments in Google Classroom. A Key to Education Reform. View Original Photo The flipped classroom, the maker movement, project-based learning, blended learning, student centered learning, hour of coding, collaboration, direct instruction, and lecture, there are passionate teacher advocates supporting each of these methods as the best way for kids to learn. 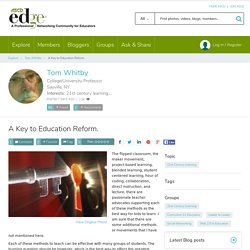 I am sure that there are some additional methods or movements that I have not mentioned here. Each of these methods to teach can be effective with many groups of students. The burning question should be however, which is the best way to affect the greatest education reform? Should teachers be banned from posting ‘scantily clad’ photos? Ottawa board seems to think so.

A teacher on vacation posts a picture on Facebook depicting her frolicking on the beach in a swimming suit. 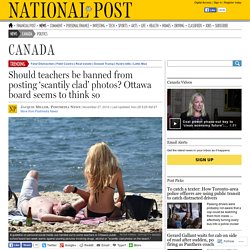 Is she risking her professional reputation and putting herself in danger of discipline? That’s one interpretation of a guideline on personal social media use handed out to some teachers in Ottawa’s public school board last week. The guideline warns against posting pictures involving drugs, alcohol or “scantily clad photos on the beach.” 100+ Tools for Differentiating Instruction Through Social Media. If you experienced none of these scenarios, then you live in a world of possibility because you grew up with the many social media tools available to support all learners. 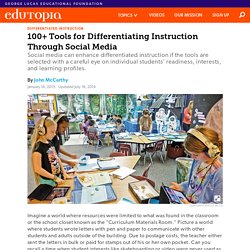 If any of these scenarios bring back memories as a teacher or student, then you understand that we have many more tools today to ensure that learners succeed despite struggles, because students and teachers have so much more available to meet every learner's needs. Selecting the Right Tool For educators differentiating instruction, social media tools embrace collaboration and global access to people and other resources. Digital literacies in the age of remix. This site uses cookies from Google to deliver its services, to personalise ads and to analyse traffic. 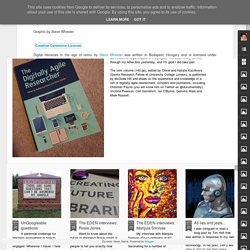 Information about your use of this site is shared with Google. By using this site, you agree to its use of cookies.Learn moreGot it About Me Steve Wheeler. Connected to Learn: Teachers' Experiences with Networked Technologies in the Classroom. Report: Young Canadians in a Wired World, Phase III: Connected to Learn For more than twenty-five years, Canadian teachers have been at the forefront of getting students online and preparing them to use the Internet in safe, wise and responsible ways. 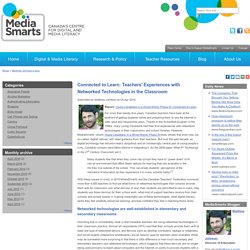 Thanks to the SchoolNet program in the 1990s, many young Canadians had their first experiences with networked technologies in their classrooms and school libraries. However, MediaSmarts’ recent Young Canadians in a Wired World, Phase III study shows that even now, our so-called “digital natives” still need guidance from their teachers. But over the past decade, as digital technology has become nearly ubiquitous and an increasingly central part of young people’s lives, Canadian schools have fallen behind in integrating it.

Why Teachers Participate in Twitter Chats (and What's Coming Next) Teachers who want to expand their knowledge, share instructional resources, and interact with others who have complementary professional interests are discovering that class is always in session thanks to the hundreds of regularly scheduled Twitter chats that happen each week. 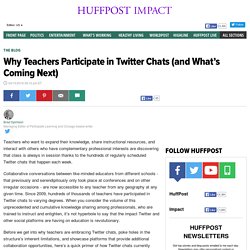 Collaborative conversations between like-minded educators from different schools - that previously and serendipitously only took place at conferences and on other irregular occasions - are now accessible to any teacher from any geography at any given time. Since 2009, hundreds of thousands of teachers have participated in Twitter chats to varying degrees. When you consider the volume of this unprecedented and cumulative knowledge sharing among professionals, who are trained to instruct and enlighten, it’s not hyperbole to say that the impact Twitter and other social platforms are having on education is revolutionary. How Twitter chats work today Taking the conversation beyond Twitter. How to: Auto-tweet during your keynote. Here is a cute little tip on how to automatically tweet useful links and tidbits of extra information during your presentation. It will make you look innovative, and get you a bunch of new followers too.

Now I’m not a big fan of live tweet streams during keynotes. Before you know it the audience is laughing about cheap jokes in the Twitter stream instead of listening to the speaker. Introduction to New Media. In the Participatory Culture Lecture (Week 4) we focused on the notion of Participatory Culture, in particular with how younger generations actively participate online; creatively contributing content online, on Web 2.0 platforms, including YouTube, Facebook and Twitter. This weeks reading YouTube as Participatory Culture (Chau 2010) initiated discussions into how young people share, develop, interact and learn through social media platforms, with a focus on YouTube.

“By merging the technical aspects of youth as media creators with the social aspects of youth as social networkers, new media platforms such as YouTube offer a participatory culture in which to develop, interact, and learn.” Chau (2010: 65) The TED talk (above) by Henry Jenkins, highlights the five key characteristics that Jenkins identifies for the Participatory Culture Framework: Hanna Spegel » Digital Dualism. Digital Dualism The Science Communications course at the Mount Saint Vincent University inspired be to dig deeper into our perception of ICTs – especially as I am working in this field professionally, an examination of my personal mindset seemed to be in place.

While researching material for my paper on 24/7 Connectivity, I stumbled upon a huge issue in both academic and popular discourse: Digital Dualism. The perception that online is different from offline, that virtual is not physical (and hereby, less “authentic”). I don’t believe in those virtual (sic!) A New Culture of Learning: About A New Culture of Learning.

Our understanding of what constitutes "a new culture of learning" requires us to share several basic assumptions about the world and how learning occurs. First and foremost is the realization that, The world is changing faster than ever and our skill sets have a shorter and shorter life. The Twitteraholic’s Ultimate Guide to tweets, hashtags, and all things Twitter. Blog.hootsuite. 5 Ways to Disrupt a Dying Industry. City police asking anyone victimized by racist Facebook page to come forward - Tbnewswatch.com Thunder Bay News. Jodi Lundmark, tbnewswatch.com TBPS executive officer Chris Adams says investigation into racist Facebook page is in preliminary stages. Top 20 in Educational Technology to Connect with through Social Media - AACE. What SXSW can teach us about the future of machines.

Living in a Digital World We Don’t Understand. Teaching 21st-century skills for 21st-century jobs. I disagree with you. So that makes you a whore. A Beautiful Visual on How Technology Is Transforming 21st Century Education. March 14, 2015 Technology is radically transforming the education landscape.The technological innovations and digital progress that marked the last two decades have brought a massive change in the ways education is being conceptualized and delivered, bigger than anytime in the history of mankind. The revolution that’s changing the way your child is taught. 9780262513623_Confronting_the_Challenges.pdf.

Social Media Site Usage 2014. In a new survey conducted in September 2014, the Pew Research Center finds that Facebook remains by far the most popular social media site. While its growth has slowed, the level of user engagement with the platform has increased. Other platforms like Twitter, Instagram, Pinterest and LinkedIn saw significant increases over the past year in the proportion of online adults who now use their sites. The results in this report are based on American adults who use the internet. Other key findings: While Facebook remains the most popular social media site, its overall growth has slowed and other sites continue to see increases in usership. Social Media and the ‘Spiral of Silence’ Using Twitter as a PBL Professional Development Tool. Social Isolation and New Technology. The Social Classroom: Integrating Social Network Use in Education: Or? Mallia, Gorg Mallia: 9781466649040: Books - Amazon.ca.