35 Real Photos That Highlight The 'Sham' Of Perfect Parenting. Dads Are Scared Paternity Leave Will Hurt Their Careers. What does it mean to be a man? 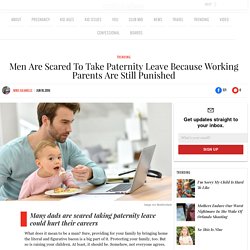 Sure, providing for your family by bringing home the literal and figurative bacon is a big part of it. Protecting your family, too. But so is raising your children. At least, it should be. Somehow, not everyone agrees. Advertisement - Continue Reading Below A new survey from Deloitte reveals that despite more and more companies offering paternity leave as part of employee benefits packages, not all men are taking advantage of it.

The survey findings show over a third of men are afraid that taking time off to care for their infants will “jeopardize their position” with more than half claiming it would be seen as a lack of commitment to their jobs. 41% are concerned about losing out on opportunities at work while they’re on leave. Dumb-Ass Stuff We Need To Stop Saying To Dads. Recently I got chatting with a nice lady in the queue at the supermarket. 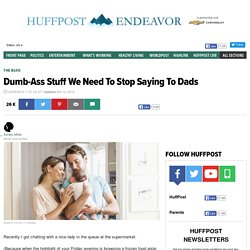 (Because when the highlight of your Friday evening is browsing a frozen food aisle, you’ll talk to everyone.) As I loaded a giant bag of nappies onto the checkout conveyor, Nice Lady smiled at me. “Kids?” The New Child Actor: The Scary Parenting Trend in Our Digital Age. (The tired toddler enters from stage left. 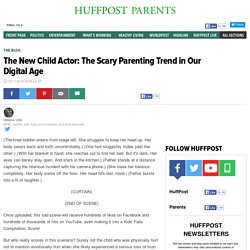 She struggles to keep her head up. Her body sways back and forth uncontrollably.) (One foot sluggishly slides past the other.) Parents are the ones who need limits on screen time. We know we should limit our kids’ screen time. 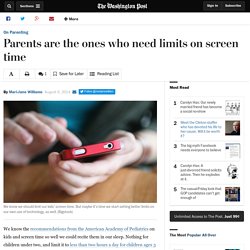 Back-to-School Health: The Tie Between Sleep and School Performance. It's that time again: back-to-school. 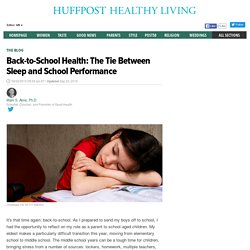 As I prepared to send my boys off to school, I had the opportunity to reflect on my role as a parent to school-aged children. My eldest makes a particularly difficult transition this year, moving from elementary school to middle school. It Might Be Too Late For Parents To Stand Up To Their Kids  "It's Time To Stand Up To Your Kids" screams the headline from this week's Maclean's Magazine. 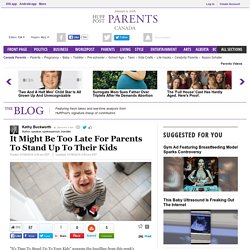 Now? Now it's time? Well, I say it might be too late, depending on where you are in this parenting game. First of all, how did we get here? In the space of just a few generations -- from the Baby Boomers (typically thought to have been born between 1946 and 1965) who produced Generation X (born between 1966 and 1977) and Generation Y (1977 to 1994), who are now raising the Millennials and Z Generation kids -- the parenting world today resembles little of what existed in 1946, post-war. Top 5 Parenting Habits for Raising Happy, Healthy Kids  We all know that parenting can be difficult. 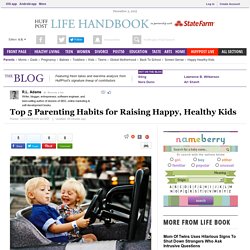 In those first few months after birth, when you're basking in the glow of becoming a new mom or dad while reeling from the difficulty of nighttime feeds, much of what's necessary to raise a child hasn't really hit you. Why Parents Shouldn't Feel Guilt About Their Kids' Screen Time. Tune into the conversation about kids and screen time, and you’d be forgiven for thinking that before the invention of the iPhone, parents spent every waking moment engaging their kids in deep conversation, undertaking creatively expressive arts-and-crafts projects, or growing their own vegetables in the backyard garden. 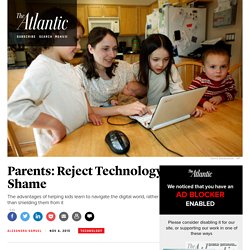 There’s a tendency to portray time spent away from screens as idyllic, and time spent in front of them as something to panic about. But research shows that vilifying the devices’ place in family life may be misguided. I’ve spent the past two years conducting a series of surveys on how families manage technology, gathering data from more than 10,000 North American parents. Why French Kids Don't Have ADHD. Early Academic Training Does Pre-Schoolers No Favors. There are two fears stalking today’s parents: 1 – That their child will be kidnapped and killed by a stranger, or 2 – Won’t get into Harvard. 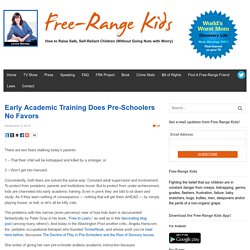 Conveniently, both fears are solved the same way: Constant adult supervision and involvement. To protect from predators, parents and institutions hover. But to protect from under-achievement, kids are channeled into early academic training. The problems with this narrow (even perverse) view of how kids learn is documented fantastically by Peter Gray in his book, “Free to Learn,” as well as in this fascinating blog post (among many others!).

She writes of giving her own pre-schooler endless academic instruction because: Like many other American parents, I had an obsession: academic success for my child. The solution? Teacher Parent Communications App. What do Students Lose by Being Perfect? Valuable Failure. In the first pages of Being Wrong, Kathryn Schulz writes, “In our collective imagination, error is associated not just with shame and stupidity but also with ignorance, indolence, psychopathology, and moral degeneracy.” 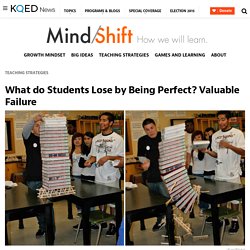 This cultural terror of messing up, combined with modern modes of parenting and schooling obsessed with narrow versions of academic and career “success,” are making students more than risk-averse. Books like How to Raise an Adult and Teach Your Children Well say kids are coming to college “underconstructed,” at best unsure of who they are and where they fit, at worst anxious and depressed, because their parents have protected them from the uncomfortable and unacceptable state of being wrong.

Parent and educator Jessica Lahey, author of the new book The Gift of Failure, wants parents (and teachers) to back off. Most parenting advice is worthless. So here's some parenting advice. I am the father of two boys, Griffin (11) and Huck (9). They are awesome: bright, curious, funny, and kindhearted. Like any parent, I would love to believe that my awesome kids are a result of my awesome parenting.

Welcome to Forbes. Parenting in a World of Social and Technological Transformation. As educators, policy makers and community activists look to build more equitable futures, a considerable amount of attention remains focused on families, especially parents. Families represent an important node in the learning ecologies of children and teens. When parents are able to connect their children to resources, material and immaterial, they provide substantive support in the pursuit of academic (i.e., higher grades) and non-academic (i.e., character building) outcomes.

Moreover, when the home can serve as a rich and vibrant space for learning through inquiry, curiosity and play, the social and educational payoffs can be immeasurable. What Not to Say to Friends Without Kids. Confession: Before I became a parent, parents annoyed me. A lot. All they did was complain about how tired they were, or how lucky I was to not have kids, followed—oddly—with incessant clucking about how “time was running out” for me to embark on the amazing journey of parenthood myself.

I vowed that if I ever became a parent, I’d never subject my childless pals to these preachy speeches. Then, in 2010, I gave birth—and, on cue, all the laments and pious musings I once hated hearing from parents came gushing out. Inside the mind of a teenager: A parent's guide. 12 Surprisingly Effective Ways to Get Organized. 6 of the best dad blogs on the Internet.

Almost everyone has heard of the mommy blog — online communities where WAHMs (work-at-home moms) and doting mothers swap stories about their kids, careers and day-to-day. But more and more often, dads are joining in on the trend, developing online hubs where they can discuss everything from diaper rash to DIY tree houses. Dad blogs tend to cover a wide variety of subjects, but they aren't so different from their mommy blog counterparts — there's ample discussion about the best baby formula, advice for school assignments, a little bit of frustration-venting and more than a few adorable family photos. There are blogs focused on every type of father, too: stay-at-home dads, the technology-obsessed, fantasy football fanatics, etc. 6 Habits Of Highly Effective Parents Pictures, Photos, and Images for Facebook, Tumblr, Pinterest, and Twitter. Parenting Is Just Damn Hard. 10 Scientific Insights About Happy Families. Fathers Are Not Mothers To Their Daughters

I set out to write a book "Our Fathers Ourselves" after finding very little research on fathers and daughters. Despite the evolution of women's and men's social roles, the father-daughter bond - whether strong and nurturing or broken or non-existing - still holds an enormous sway over women. No matter how much their fathers may have disappointed or hurt them, all the women I met felt a measure of loyalty and gratitude to them, and expressed their eagerness to stay connected to the men who were among the first loves in their life. Fathers matter a great deal not only in childhood but well into adulthood--and yet few women are truly aware of the ways in which their fathers impact them. Below I draw from the research I conducted while writing my book to address the issues that people are most interested in about dads and daughters.

Lessons fathers are better able to teach their daughters than mothers. As daughters enter into adolescence their relationships with dads change. Stop Referring to Fathers as Babysitters  Give dads a gift they can really use this Father’s Day: paternity leave. I realized the other day that there may not be many more Father’s Days when my dad remembers who I am. Paternity Leave: Why So Few Canadian Dads Take Time Off. Toronto dad Adam Shona didn’t stay home after the birth of his son two years ago. “My friends hadn't done it. Inside the daddy wars: Fathers want to lean in too. How social media has reshaped fatherhood - Telegraph.

The vast numbers of pics and posts suggests a serious shift in the attitudes of dads towards their little pride and joy. Go back a generation or two and it would have been at best a tatty snapshot in a wallet, the odd family portrait on the office desk or a fading pic pinned to the cab of the car or lorry. Yes, Your Toddler Can Watch TV: The New Rules for Screen Time. Overachieving Elf on the Shelf Mommies. By now we have all heard of the adorable little Elf on the Shelf. Almost everyone I know has one. Dads who do chores raise daughters who aspire to high-paying careers. Fathers who split dishes, dusting and laundry with mothers raise daughters who aspire to high-paying careers, says the author of a new gender roles study from the University of British Columbia. 10 Commitments That Will Make You a Better Parent. Posted on 03 December 2013.

19 Proven Tips for Getting Parents Involved at School. The Fatherhood Project.