The Office Of The Future Will Be Natural, Chair-less, And Designed For Collaboration. Plusnet, a U.K. 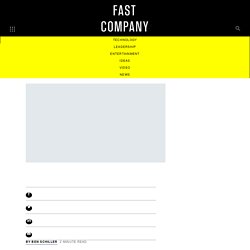 4 resources for fighting fake news. We’ve been hearing a lot lately about the problem of fake news stories and how they might impact our impressions of the world. 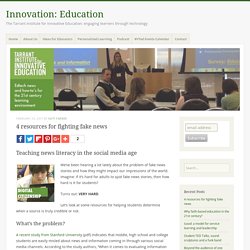 Imagine: if it’s hard for adults to spot fake news stories, then how hard is it for students? Turns out: VERY HARD. Let’s look at some resources for helping students determine when a source is truly credible or not. What’s the problem? A recent study from Stanford University (pdf) indicates that middle, high school and college students are easily misled about news and information coming in through various social media channels. And according to this NPR article, more than 80 percent of middle schoolers believe that ‘sponsored content’ are real news stories. 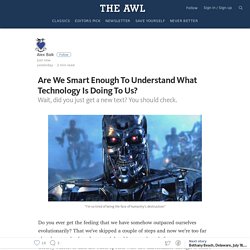 The Disruptive Innovation Behind Pokémon Go. In an explosive combination of creativity, cutting-edge technology, and brilliant marketing, Pokemon GO has become a global craze in less than a week. 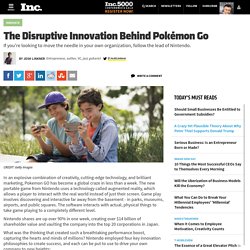 The new portable game from Nintendo uses a technology called augmented reality, which allows a player to interact with the real world instead of just their screen. Game play involves discovering and interactive far away from the basement - in parks, museums, airports, and public squares. The software interacts with actual, physical things to take game playing to a completely different level. 9 Biggest Myths About Creativity You Should Never Believe. The following beliefs are held firmly throughout corporate America, and I hear them all the time. 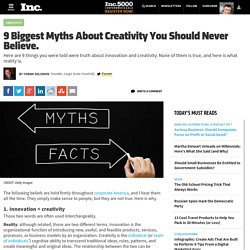 They simply make sense to people, but they are not true. Here is why. 1. Innovation = creativity Those two words are often used interchangeably. Reality: although related, those are two different terms. 2. Myth: Innovation cannot be achieved by mature, large companies. Reality: while most innovation comes from startup companies, some of the top innovative companies are mature and large (Apple was founded in 1976 and generates $228b. A Canadian man invented a wheel that can make cars move sideways. The age of parallel parking may soon be over thanks to a literal reinvention of the wheel by Canadian man William Liddiard. 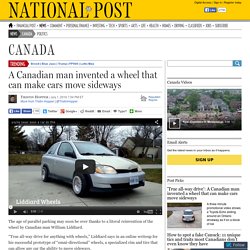 “True all-way drive for anything with wheels,” Liddiard says in an online writeup for his successful prototype of “omni-directional” wheels, a specialized rim and tire that can allow any car the ability to move sideways. The tire is rounded like a donut and sits within a specialized roller-equipped rim that can move the tire horizontally. The result is a wheel that can allow any car to “crab” side to side. How connectivity and tradition co-exist in Bhutan. Connectivity can be ensured in regions without having to lose out on a country’s ethos, language and tradition When one visits Bhutan, a country with 75% green cover, one expects to see a lot of flora, varying terrain and hardly any links with the modern, developed world. 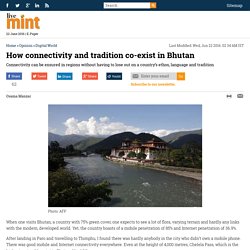 Yet, the country boasts of a mobile penetration of 85% and Internet penetration of 36.9%. Charles Duhigg Explains the Science of Productivity and Innovation. Charles Duhigg, Pulitzer Prize-winning reporter and author of the #1 New York Times bestseller The Power of Habit, discussed his latest book, Smarter Faster Better: The Secrets of Being Productive in Life and Business with Heleo’s CEO, Rufus Griscom. 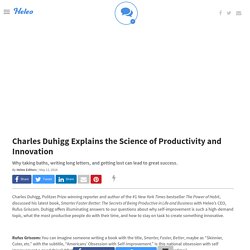 Duhigg offers illuminating answers to our questions about why self-improvement is such a high-demand topic, what the most productive people do with their time, and how to stay on task to create something innovative. Disrupting the Everyday: How Enterprises Use Digital to Innovate. 6 ways to ensure that things don’t change. 6 ways to ensure that things don’t change Over the years I’ve written countless articles and posts on how administrators and teacher leaders can affect positive change through school culture, professional development, and the application of emotional intelligence, just to mention a few possible sources of influence. 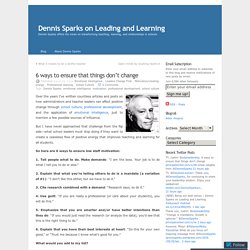 Is ‘grit’ overrated in explaining student success? Harvard researchers have a new theory. Members of the U.S. 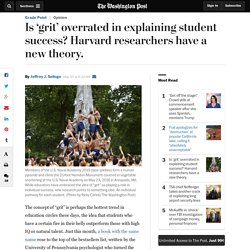 Naval Academy 2019 class (plebes) form a human pyramid and climb the 21-foot Herndon Monument covered in vegetable shortening at the U.S. Naval Academy on May 23, 2016 in Annapolis, Md. While educators have embraced the idea of “grit” as playing a role in individual success, new research points to something else: An individual pathway for each student.

Innovation Is About Culture Not Technology - Digital Doughnut. In all this talk of digital disruption and innovation, existing IT organizations might feel left out. They are wondering whether the competencies they’ve been developing through years and even decades are now obsolete. These departments are built around efficiency and focus on reliability and robustness. However, these are not the words that would describe the digital transformation processes that require organizations to be flexible and agile to be able to innovative. This innovation might be hard to unlock. Innovation requires taking risks and trying new approaches, which is the exact opposite of what IT departments have been doing for years. To make this happen, one of the key factors that need to be addressed is the company culture in general and IT culture in particular.

The goal is then to switch the focus from avoiding risks completely to managing risk to support innovation.

Five lessons Walt Disney and Steve Jobs can teach us about innovation. Steamboat Willie was essentially a tech demo for synchronized sound. At the time of his death, Apple founder Steve Jobs was the largest shareholder of the Walt Disney Company. When Jobs sold Pixar to Disney, he received 7.7 percent of Disney in return for his share of Pixar. But what most people don't realize is just how similar in personality and style Steve Jobs was to Walt Disney.