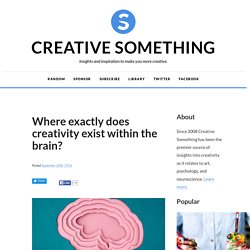 If you’re like most people, you probably grew up being taught that the right hemisphere of the brain is where creativity and subjects like art primarily reside. This is a common fallacy, one which is important to understand if we’re to better understand how we can be more creative (or what might be blocking us from doing so). The common fallacy of creativity being a predominantly right-brained activity originally stemmed from historical studies of the brain’s anatomy and how different parts of the brain control different, distinct physical reactions.

Writing is primarily believed to be a left-brain activity, whereas music awareness is believed to be managed by the right side of the brain. And yet, asking whether or not creativity belongs to the left or right side of the brain is like asking what flavor yellow is. Creativity doesn’t belong to any single part or region of the brain. The same concept goes for creativity. On Flipboard. 7 Science-Backed Habits of Creative Genuises. Three Habits Of The Most Creative Problem Solvers. Some people are better at getting out of tough challenges than others. 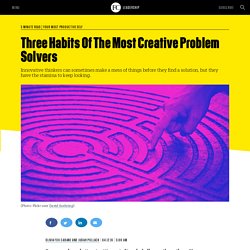 Many of them, at least in our experience, are entrepreneurs. But all of them are creative, innovative thinkers. That doesn't mean they're easy, though. In fact, the problem-solving process is often messy and chaotic, but it's usually rescued by three key habits that this type of person tends to draw on when the stakes are highest. 1. To understand them, it helps to crack open a childhood picture book, The Cat in the Hat Comes Back. That's when the Cat in the Hat shows up again (this being the sequel). Virginia Woolf on the Relationship Between Loneliness and Creativity. There is a kind of loneliness that lodges itself in the psyche and never fully leaves, a loneliness most anguishing not in solitude but in companionship and amid the crowd. 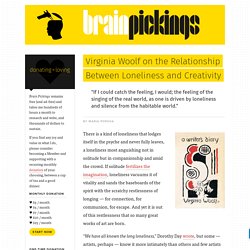 If solitude fertilizes the imagination, loneliness vacuums it of vitality and sands the baseboards of the spirit with the scratchy restlessness of longing — for connection, for communion, for escape. Team Building Tips for Giving Employees Independence. The Leadership Insiders network is an online community where the most thoughtful and influential people in business contribute answers to timely questions about careers and leadership. 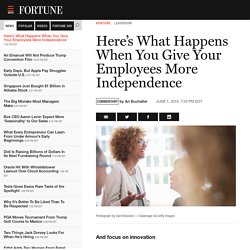 As companies grow—especially in the technology sector—it’s important for them to balance the need to maintain what’s been built with the need to encourage new ideas and innovations. Growth requires structure, process, and discipline to operate the business in a stable way, but also requires the organization to think creatively—even disruptively—about new problems that emerge. Embrace a mindset of change It starts with understanding and really embracing the fact that nothing is ever done. Bring your surroundings to life with Touch Board DIY Starter Kit.

We knew the future would be cool, but few could have predicted it would be this fun. 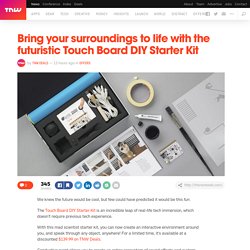 The Touch Board DIY Starter Kit is an incredible leap of real-life tech immersion, which doesn’t require previous tech experience. With this mad scientist starter kit, you can now create an interactive environment around you, and speak through any object, anywhere! For a limited time, it’s available at a discounted $139.99 on TNW Deals.

Is Solitude a Key Element of Creativity? 6 Brain Science Surprises about Being Creative. Exploding the myth of the scientific vs artistic mind. It’s a stereotype, but many of us have made the assumption that scientists are a bit rigid and less artistic than others. 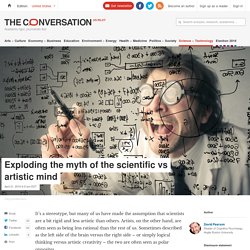 Artists, on the other hand, are often seen as being less rational than the rest of us. Sometimes described as the left side of the brain versus the right side – or simply logical thinking versus artistic creativity – the two are often seen as polar opposites. Neuroscience has already shown that everyone uses both sides of the brain when performing any task. Simon’s Watchmakers and the Future of Courseware. Herbert Simon, a Nobel Laureate known for his work in too many areas to count, used to tell a story of two watchmakers, Tempus and Hora. 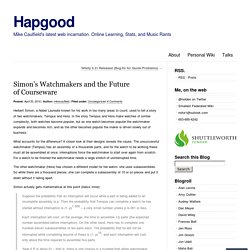 In the story Tempus and Hora make watches of similar complexity, both watches become popular, but as one watch becomes popular the watchmaker expands and becomes rich, and as the other becomes popular the maker is driven slowly out of business. What accounts for the difference? A closer look at their designs reveals the cause. The unsuccessful watchmaker (Tempus) has an assembly of a thousands parts, and for the watch to be working these must all be assembled at once; interruptions force the watchmaker to start over again from scratch. Toronto students create emoji to reflect themselves. A zomb-moji. 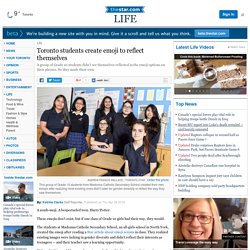 A bespectacled teen. Harry Potter. These emojis don’t exist, but if one class of Grade 10 girls had their way, they would. The students at Madonna Catholic Secondary School, an all-girls school in North York, created the emoji after reading a Star article about emoji sexism in class. They realized existing images were lacking in gender diversity and didn’t reflect their interests as teenagers — and their teacher saw a learning opportunity. 20 Ideas to Promote More Creativity in Your Classroom - Fusion Yearbooks. Benjamin Franklin once said: “Tell me and I forget, teach me and I may remember, involve me and I learn.” 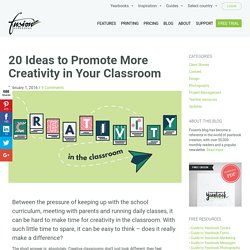 Hands-on learning is a great way to apply a creative twist to traditional course content and engage students on a deeper level. Here are three ideas for inspiration: English: Rather than asking students to read class texts at home, incorporate a group reading session into each class. Ensure that every student is selected as the daily reader at least once. The Creative Mind & Sleep: Does Innovation Thrive In The Night? 3 Surefire Ways To Jumpstart Your Creativity. Oliver Burkeman: ‘Scheduling seems boring compared to inspiration, but it’s the best way to get creative work done’

If only I had enough time, I’d write that novel, finish those paintings, publish my portfolio… [insert challenging, yet creatively satisfying project of your choice]. 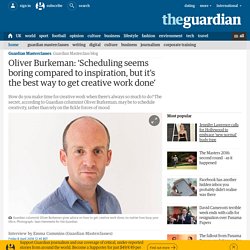 More often than not, it’s the things that we really enjoy doing that we put off – the things that provide creative stimulation and showcase what we’re truly capable of. The laundry gets done (most of the time), that must-watch TV programme inevitably gets watched, but the creative project that makes your soul sing gets endlessly deferred. Moleskine launches its Smart Writing Set to digitize your brainstorm.

For the past week or so, I've been taking all of my notes for meetings, interviews, to-dos, and more in a Moleskine notebook. That's not unusual at all – I've been jotting notes down in Moleskine's notebooks for years. What is different is that all of those notes are now on my iPad, exported to my Evernote account, and fully searchable from any of my digital devices. I've been using Moleskine's new Smart Writing Set, a $199 pen and notebook set that lets me capture thoughts in an analog fashion, while retaining the benefits of digital archiving and searching.

Adam Grant: The surprising habits of original thinkers. Creativity and independent thinking, built with Lego bricks, Education News. Students call him the "Lego teacher", and Mr Kazuya Takahashi of Kogakuin University Junior and Senior High School in Tokyo, Japan, has certainly earned the title. After all, the 35-year-old uses novel teaching methods, including the use of the plastic toy bricks, to teach independent thinking and creativity in subjects such as English.

In a typical lesson, his students may be asked to form small groups and use the toy bricks to create stories about what they have learnt. Mr Takahashi, a finalist of the Global Teacher Prize, said some students, who may not be good at expressing themselves through language, can use Lego bricks to break through. Defeating the Inner Saboteurs of Creativity. It's easier to start from scratch than it is to get out of a creative rut.

That's because we know a lot more about what sparks creativity than we do about what blocks it. The Greeks believed that inspiration came to us through muses who literally visited us. Freud insisted that creativity was a kind of sublimation, a way of dealing with repressed inclinations. Jung theorized a collective unconscious, structures of mind that all people have in common. Today, psychologists like Kay Redfield Jamison describe creativity as a mood disorder, a mild form of madness. 11 Science-Backed Reasons Running Is Really Good for You. This Silicon Valley Startup Will Measure Your Creativity in 20 Minutes. "Creativity Is Not an Accident, It's Something You Earn" 7 Simple Secrets to Being More Creative.

As a professional speaker and book author, I often teach programs and coach executives on how to be more creative and innovative. Everyone that I work with wants to know what the secrets are to be more creative. The reality is simple, it's just about making small changes. The good news is just by changing or adding small things to the buffet of your life, you can almost immediately be more creative at work and at home.

Here are 7 simple secrets to being more creative. 1. 2. 3. This Startup Is Using Games To Measure Creativity. Angad Singh thinks there’s a good chance that within 20 years, your job will no longer exist. And if it does, a bot will do it. Forbes Welcome. Hypnagogia, The State Between Sleep And Wakefulness, Is Key To Creativity. Creative People Say No. Creativity is rejected: Teachers and bosses don’t value out-of-the-box thinking. Visual Note-Taking for Educators: A Teacher’s Guide to Student Creativity. Many of us will recall the phrase “Stop doodling and pay attention!”

This Simple Sign Can Make You a More Powerful Entrepreneur. Within my lifetime, business tools have evolved from the fax, telephone and letter to computer, cell and social media. You can be plugged in 24/7, especially if you include "light work" like checking email or doing social media. What the Research Tells Us About Team Creativity and Innovation. The Power Of Routines In Sustaining Creativity. Create an Environment for Creative Collaboration. Creativity Is Nourished by Conflict. Where does 'creativity' happen in your brain? Even in the wilderness that is human thinking, creative ideas seem to be deliberately designed to defy empirical inquiry. 18 Signs You Are Killing Your Creativity — Personal Growth. 4 Weekly Habits of Highly Creative Leaders.

Hacking The Hype: Why Hackathons Don’t Work. You Can Be Productive or Creative, Not Both. Lifehacker. 9 Ways To Dramatically Improve Your Creativity. Coloring, Creativity, and Why There’s Freedom in Limitation. 18 Habits Of Highly Creative People. Researchers tie unexpected brain structures to creativity — and to stifling it. Innovation Begins by Asking the Right Questions. Creative Leadership. Does the Internet Inspire Or Stifle Creativity? Five-Minute Film Festival: Comics in the Classroom. Three Ways To Reframe A Problem To Find An Innovative Solution. Advice: What the Most Successful People Do Before Breakfast. 14 Things Nobody Told You About Being Creative. 3 Easy Ways to Exercise Your Brain’s Creativity. This activity can boost memory by 29% 23 Awesome Online Resources for Design Inspiration. 5 Creativity Books Everyone Needs To Read. Solve problems by tapping into your unconscious mind. Picture This: Using Visual Aids to Inspire Creativity.

How Nostalgia Fuels Creativity. 5 Ways to Be More Creative. The complete guide to having a creative breakthrough. Creativity and Fantasy. :O. Creativity Innovation Genius. The Creativity Mindset. We’re Comfortably Numb and It’s Robbing Us of Our Creativity - What Is Dialogue. What Teachers Need to Know about Critical Thinking Vs Creative Thinking. The Myth of the Minecraft Curriculum. Businessinsider. 6 Must Follow Morning Routines for Startup Entrepreneurs To Enhance Creativity and Productivity. 5G: Creativity Without Constraint Or A One-Size-Fits-All Future? 7 Creative Habits of Highly Successful People.

10 Looks At How Mindfulness Boosts Creativity. Schooling should help children DISCOVER their own unique talents, not “standardize” them. Creativity, Connectedness and the Adjacent Possible. Sketchnoting. ​Five Ways to Teach Creativity through Coding. Teaching Creativity. Creativity on the Run: 18 Apps that Support the Creative Process. How we will learn.