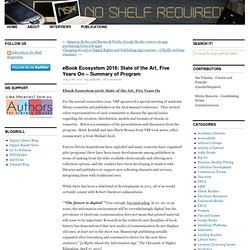 They invited select representatives of each community to discuss the special issues regarding the creation, distribution, models and formats of ebooks in consortia. Below is a summary of the presentations and discussion from the program. Flat World Knowledge Doubles Growth, Outpaces Digital Textbook Trend. SOURCE: Flat World Knowledge IRVINGTON, NY--(Marketwire - Aug 24, 2011) - Flat World Knowledge, the largest commercial publisher of free and open college textbooks, today announced 7 out of 10 of its student users will be consuming digital textbooks during the new academic year that begins this month, far ahead of the industry curve. 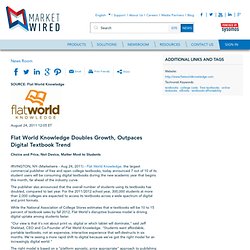 The publisher also announced that the overall number of students using its textbooks has doubled, compared to last year. For the 2011/2012 school year, 300,000 students at more than 2,000 colleges are expected to access its textbooks across a wide spectrum of digital and print formats. While the National Association of College Stores estimates that e-textbooks will be 10 to 15 percent of textbook sales by fall 2012, Flat World's disruptive business model is driving digital uptake among students faster.

Kno Turns Textbooks 3D (Video) How do you make a digital textbook more than just a glorified PDF on a tablet? 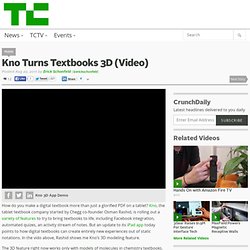 Kno, the tablet textbook company started by Chegg co-founder Osman Rashid, is rolling out a variety of features to try to bring textbooks to life, including Facebook integration, automated quizes, an activity stream of notes. But an update to its iPad app today points to how digital textbooks can create entirely new experiences out of static notations. In the vido above, Rashid shows me Kno’s 3D modeling feature. The 3D feature right now works only with models of molecules in chemistry textbooks. It converts the standard chemistry notations indicating how atoms are bonded together in a molecule into a spinning 3D model along the margins. With 4 New Products, Kno Finally Looks Like a Contender in the E-Textbook Industry. CourseSmart Launches HTML5-Based Reader for Etextbooks. 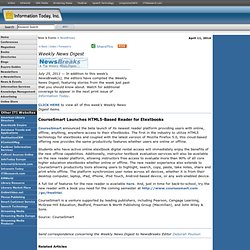 The first in the industry to utilize HTML5 technology for etextbooks and coupled with the latest version of Mozilla Firefox 5.0, this cloud-based offering now provides the same productivity features whether users are online or offline. Students who have active online etextbook digital rental access will immediately enjoy the benefits of the new offline capabilities. Our Products. Float: The ‘Netflix of Reading’ Brought To You By The ‘YouTube of Documents’

“Reading for pleasure is an extraordinary activity,” psychologist Victor Nell once wrote. 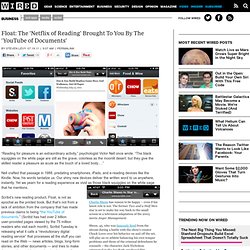 “The black squiggles on the white page are still as the grave, colorless as the moonlit desert; but they give the skilled reader a pleasure as acute as the touch of a loved body….” Nell crafted that passage in 1988, predating smartphones, iPads, and e-reading devices like the Kindle. E-Book Readers, Netbooks Have Most to Fear From Tablets. Research suggests that tablet devices pose a threat to netbooks and e-book readers, but not game consoles. 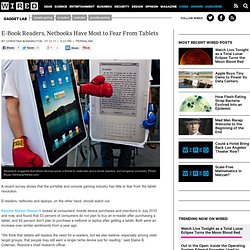 Photo: Bryan Derballa/Wired.com A recent survey shows that the portable and console gaming industry has little to fear from the tablet revolution. Study This: E-Textbook Readers Compared. The Future of Education: Textbooks vs. eBooks - bookhitch.com. The Future of Education: Textbooks vs. eBooks New ways to cut costs: As the 2009 fall season rapidly approaches students, parents, and educational institutions prepare for another academic year while publishers rush to get their books in the bookstores. 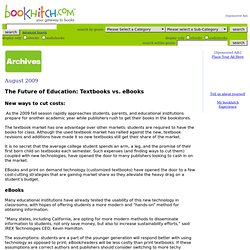 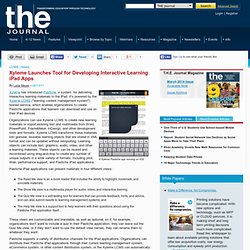 It's powered by the Xyleme LCMS ("learning content management system") hosted service, which enables organizations to create Pastiche applications that learners can download and use on their iPad devices. Organizations can use Xyleme LCMS to create new learning materials or import existing text and multimedia from Word, PowerPoint, FrameMaker, InDesign, and other development tools and formats. Xyleme LCMS transforms those materials into granular, reusable learning objects that are stored in XML format and can be updated without reimporting. Pastiche iPad applications can present materials in four different views: Pastiche supports a variety of distribution channels for the iPad applications. A free demo of a sample Pastiche iPad application is available free from the iTunes App Store. A WordPress Theme for Taking Notes on Your Kindle. [This is a guest post by Aram Zucker-Scharff. 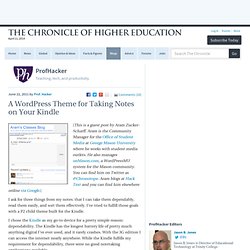 Aram is the Community Manager for the Office of Student Media at George Mason University where he works with student media outlets. Publish. Cover creation (Single spanned cover vs. Separate front and back cover) One-piece cover allows you complete artistic control of your artwork. Uploading a spanned cover is the only way to add ardwork to the spine of a book. Our automated cover creator allows for a single color on the spine, along with any book title you insert. iPads Work Great in the Classroom Says Virginia Dept of Ed. - eBookNewser. Watch Out, Print Textbooks: Here Comes Inkling. Digital Tools. 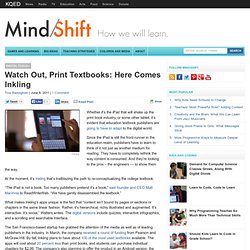 Virginia Shares School iPad, E-book Experiences. In four Virginia school divisions, a four month pilot of e-books and iPads sheds light on the potential benefits and challenges these digital tools offer. The Beyond Textbooks Year One Report paints a qualitative case study that gives more insight into issues like cost. But it doesn't draw definitive conclusions, said Tammy McGraw, the director of educational technology at the Virginia Education Department.

Instead, this case study provides a snapshot of class experiences with e-books and mobile devices and raises questions that school districts should ponder. The teacher and student opinions Hands down, both teachers and the 333 students who participated reported that the iPad has great potential as a teaching and learning tool. eBooks Account For Less Than 3% Of Sales From University Presses - eBookNewser. Interactive Textbooks. News: Mixed on Media. When Apple unveiled the iPad just over a year ago, publishers had high hopes that it would finally bump e-textbooks into the mainstream. But while the Apple iPad and computing tablet kin have made rapid gains on college campuses, printed textbooks are still alive and well thanks to a boom in rentals, according to a new survey from Student Monitor. The survey, which polled 1,200 full-time students (average age: 20.6) at four-year institutions in March, found that the proportion of students who rented at least one textbook this spring doubled from last spring, leaping from 12 percent to 24 percent.

Students who rented reported an average savings of $127. And the renting trend shows no sign of slowing: 36 percent of underclassmen said they are either likely or very likely to rent at least one textbook next semester. iPad, Tablet Users Prefer Digital Texts. Mobile Computing | Research iPad, Tablet Users Prefer Digital Texts Acceptance of digital texts is way up, especially among users of iPads and other tablets. In fact, according to research released this week, time spent reading texts in digital formats now just about equals the time spent on paper-based texts. Ease of Use According to the report, released by market research firm Gartner, a full 94 percent of iPad users and users of other tablet devices either prefer reading digital texts (52 percent) or find them as readable as printed texts (42 percent).

Contrasted with that were laptop users, a large portion of whom--47 percent--said they find reading texts on screen more difficult than reading paper.