(Spiked) Maple Apple Cider Recipe. In the fall and winter I love a warm, cozy cocktail. 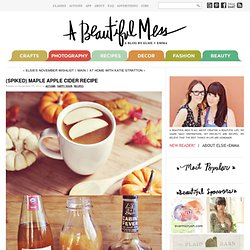 Spiked apple cider is one of my favorite treats. This recipe is not super boozy, but if you don't drink try omitting the liquor and adding a tablespoon of real maple syrup to your cider. :) In a teapot, combine: 5 cups apple cider, 2 shots maple flavored whiskey, 2 shots apple liqueur (I love Thatcher's!) , 4 cinnamon sticks, 1/2 an apple (sliced), 1/2 cup orange juice. Serves 2. I think I'm gonna make some more right now... xo. Chocolate Buttermilk Cake. When you bake often it's easy to find your go-to recipe for something and stick with it.

And I love having a no-fail plan for when I need to make something quick, or for when I used to make the same things over and over for the Red Velvet Sweet Shoppe. But I always love trying new recipes too! I was intrigued by this chocolate cake recipe because it contained buttermilk and coffee. (!!!!!!) I also noticed that the recipe called for oil instead of butter.

My go-to chocolate cake recipe does the same trick, and I really like the crumb produced when using oil instead of butter (for cakes, anyway). I am happy to report that this is indeed a fantastic chocolate cake recipe! Chocolate Buttermilk Cake, makes two 8x2 inch round cakes. Chocolate Raspberry Forest Cake {Birthday} My husband is a quarter of a century old! 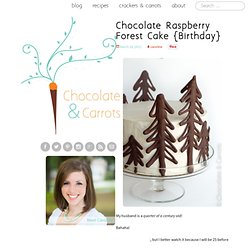 Bahaha! I just love saying that, but I better watch it because I will be 25 before you know it! Yay! By Logan’s request, I made a Chocolate Raspberry Cake. Logan’s Chocolate Raspberry Forest Cake was: Dark chocolate cake layersDark chocolate ganache and raspberry fillingVanilla buttercream frostingDark chocolate trees Let me tell you something! Just look at those amazing layers! This cake was so moist and with the tart flavor and crunch from the filling. Chocolate Cherry Trifle Recipe : Nigella Lawson. Directions Slice the chocolate pound cake and make jam sandwiches with the cherry jam, and layer the bottom of a large wide trifle bowl. 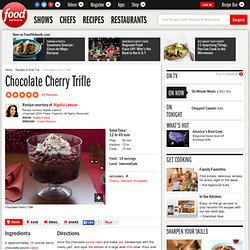 Pour over the cherry brandy so that the cake soaks it up, and then top with the drained cherries. Cover with plastic wrap and leave to macerate while you make the custard. Melt the chocolate on low to medium heat in the microwave, checking after 2 minutes, though it will probably need 4 minutes. Or you can place it in a bowl over a pan of simmering water. In a saucepan warm the milk and cream. Whisk like mad, which will avert possible crisis. The custard will get darker as it cooks and the flecks of chocolate will melt once the custard has thickened. When the custard is cold, pour and spread it over the chocolate cake layer in the trifle bowl, and leave in the refrigerator to set, covered in plastic wrap overnight. When you are ready to decorate, softly whip the cream for the topping and spread it gently over the layer of custard. Christmas Cornish Game Hens Recipe : Patrick and Gina Neely.

Beat the egg white with 1 tablespoon water in a large bowl until foamy. Add the nuts, sugar, cumin , cayenne, cinnamon and 1/2 teaspoon salt and mix well. Remove the nuts from the oven and stir. Photograph by Steve Giralt.