Kazmi and Sakata at Law

Understanding and Avoiding Notario Fraud. As the Executive Action on Immigration, ordered by the White House in November 2014, continues to be challenged in court, scammers and fraudsters around the country are looking for creative ways to prey on law-abiding immigrants. 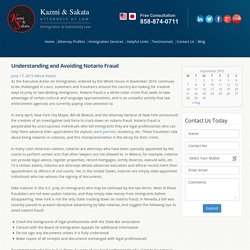 Notario fraud is a white-collar crime that seeks to take advantage of certain cultural and language approximations, and is an unlawful activity that law enforcement agencies are currently paying close attention to. In early April, New York City Mayor, Bill de Blassio, and the Attorney General of New York announced the creation of an investigative task force to crack down on notario fraud. Notario fraud is perpetrated by unscrupulous individuals who tell immigrants they are legal professionals who can help them advance their applications for asylum, work permits, residency, etc. U.S. Visa System back up and running, Caused Serious Delays. In June 2015, more than 700,000 visas were put on hold and over 1,500 visa applications have been rescheduled because a computer error is preventing U.S. 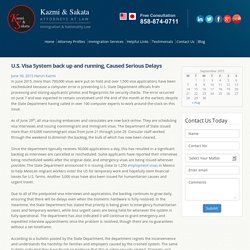 State Department officials from processing and storing applicants’ photos and fingerprints for security checks. The error occurred on June 7 and was expected to remain unresolved until the end of the month at the earliest, despite the State Department having called in over 100 computer experts to work around-the-clock on this issue. As of June 29th, all visa-issuing embassies and consulates are now back online. They are scheduling visa interviews and issuing nonimmigrant and immigrant visas. The Department of State issued more than 410,000 nonimmigrant visas from June 21 through June 29.

Since the department typically receives 50,000 applications a day, this has resulted in a significant backlog as interviews are cancelled or rescheduled. Political Turmoil Surrounds Immigration Lawsuit in the United States. As various legal challenges prevent carrying out the Executive Action on Immigration issued by President Barack Obama in November of 2014, the topic of immigration reform in the United States has become deeply political. 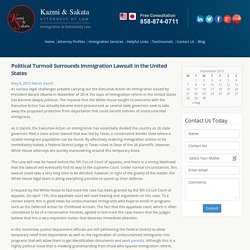 The impasse that the White House sought to overcome with the Executive Action has actually become more pronounced as several state governors seek to take away the proposed protection from deportation that could benefit millions of undocumented immigrants. As it stands, the Executive Action on Immigration has essentially divided the country as 26 state governors filed a class-action lawsuit that was led by Texas, a conservative border state where a sizable immigrant population can be found. By effectively ordering immigration actions to be immediately halted, a Federal District judge in Texas ruled in favor of the 26 plaintiffs.

However, White House attorneys are quickly maneuvering around this temporary block. Are Green Cards Being Sold to Wealthy Immigrants? Shocking reports from whistleblowers at the Department of Homeland Security (DHS) suggest that a special visa program for rich investors is rife with dangerous errors and serious omissions. 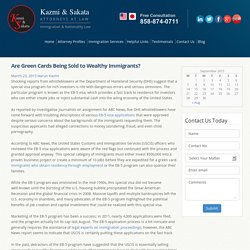 The particular program is known as the EB-5 visa, which provides a fast track to residence for investors who can either create jobs or inject substantial cash into the ailing economy of the United States. As reported by investigative journalists on assignment for ABC News, five DHS whistleblowers have come forward with troubling descriptions of various EB-5 visa applications that were approved despite serious concerns about the backgrounds of the immigrants requesting them. The suspicious applicants had alleged connections to money laundering, fraud, and even child pornography. Kazmi & Sakata Immigration Lawyers. If you are a permanent resident of the United States, it is important to make sure that your green card is renewed as required. 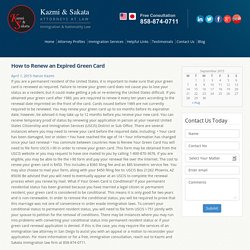 Failure to renew your green card does not cause you to lose your status as a resident, but it could make getting a job or re-entering the United States difficult. If you obtained your green card after 1989, you are required to renew it every ten years according to the renewal date imprinted on the front of the card. Cards issued before 1989 are not currently required to be renewed. You may renew your green card up to six months before its expiration date; however, be advised it may take up to 12 months before you receive your new card. You can receive temporary proof of status by renewing your application in person at your nearest United States Citizenship and Immigration Services (USCIS) District or Sub Office.

Federal Judge Denies Request to Stay the Halt on President Obama's Immigration Plan. A federal judge in Texas has denied the U.S. 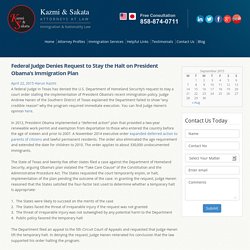 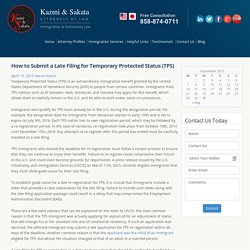 Immigrants from TPS nations such as El Salvador, Haiti, Honduras, and Somalia may apply for this benefit, which allows them to lawfully remain in the U.S. and be able to work under some circumstances. Immigrants who qualify for TPS must already be in the U.S. during the designation period. For example, the designation date for immigrants from Honduras started in early 1999 and is set to expire on July 5th, 2016. Each TPS nation has its own registration period, which may be followed by a re-registration period. In the case of Honduras, re-registration took place from October 16th, 2014 until December 15th, 2014.

Making Sense of the New STEM Ruling. There’s little doubt that the entire U.S. immigration situation is in a state of flux as the nation’s leaders try to figure out how to fix a flawed immigration system that is creating much controversy throughout the country. 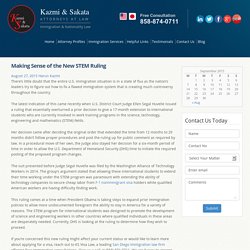 The latest indication of this came recently when U.S. District Court Judge Ellen Segal Huvelle issued a ruling that essentially overturned a prior decision to give a 17-month extension to international students who are currently involved in work training programs in the science, technology, engineering and mathematics (STEM) fields. Her decision came after deciding the original order that extended the time from 12 months to 29 months didn’t follow proper procedures and post the ruling up for public comment as required by law. Senators Co-Sponsor Bill Designed to Protect Transnational Adoptees from Deportation. Members of the Senate are sponsoring a bill that seeks to provide citizenship to transnational adoptees who were never properly nationalized. 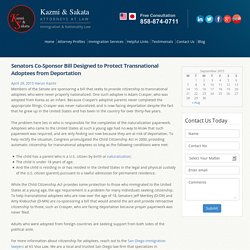 One such adoptee is Adam Crasper, who was adopted from Korea as an infant. Because Crasper’s adoptive parents never completed the appropriate filings, Crasper was never naturalized, and is now facing deportation despite the fact that he grew up in the United States and has been in the country for over thirty-five years. How Do I Become a Naturalized Citizen of the United States?

The process of naturalization is one of the many benefits offered and managed by the United States Customs and Immigration Services (USCIS). 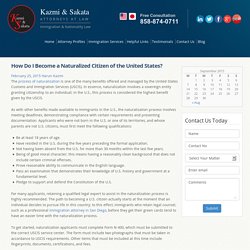 In essence, naturalization involves a sovereign entity granting citizenship to an individual; in the U.S., this process is considered the highest benefit given by the USCIS. As with other benefits made available to immigrants in the U.S., the naturalization process involves meeting deadlines, demonstrating compliance with certain requirements and presenting documentation. Applicants who were not born in the U.S. or one of its territories, and whose parents are not U.S. citizens, must first meet the following qualifications: San Diego Immigration Lawyers You Can Trust. Temporary Protection for Immigrants from Nepal in the United States. The New Oath of Allegiance for Naturalized U.S. Citizens. Naturalization and citizenship are the maximum benefits offered by United States Citizenship and Immigration Services (USCIS), and they often culminate with a ceremony and the Oath of Allegiance, which is the recital of a commitment to assume certain patriotic responsibilities.

Until recently, the Oath of Allegiance that immigrants recited as they became naturalized citizens left them open to compulsory and bellicose military service when required by law. DHS Considering “Known Employer” Pilot Program. As the U.S. and Cuba Embassies Reopen, What About Visas and Immigration? In late 2014, the governments of the United States and Cuba announced their intentions of reestablishing diplomatic ties for the first time since the early 1960s. Ever since that historic announcement, both governments have been trying to advance their common interests, which include the reopening of their respective embassies.