Daphne Koller. Daphne Koller: What we're learning from online education. About. Daphne Koller on the Future of Online Education. Coursera president: bursting the Moocs bubble a boon for us. Some academics enjoyed nothing more than seeing the “Moocs bubble” burst. 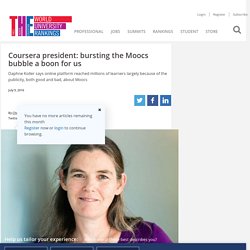 But it turns out that those who scoffed at massive open online courses may have unwittingly been playing into the hands of the innovation they were disparaging. Daphne Koller, president and co-founder of Coursera, told Times Higher Education that the hype around online courses and whether they would destroy traditional universities had been the biggest driver of student recruitment to her company, the world’s largest Mooc platform. Professor Koller, the Rajeev Motwani professor of computer science at Stanford University, said that both the excitement around Moocs and the subsequent realisation that they would not be quite so transformative had been “largely overblown”.

Instead, she argued, Coursera – which now has 20 million users and 145 course providers, including some of the world’s leading universities – was “making significant, steady progress in democratising access to education”. chris.havergal@tesglobal.com. Daphne Koller (@DaphneKoller) Coursera’s co-founder Daphne Koller set to start anew at Calico. In a blog post, Coursera co-founder Daphne Koller announced she is leaving the company to join Alphabet subsidiary Calico. 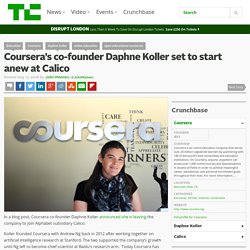 Koller founded Coursera with Andrew Ng back in 2012 after working together on artificial intelligence research at Stanford. The two supported the company’s growth until Ng left to become chief scientist at Baidu’s research arm. Today Coursera has grown to teach 20 million students material from 1,300 courses. Though both have now officially moved on to new challenges, Koller and Ng remain co-chair’s of the Coursera Board of Directors. Rick Levin has been the CEO of Coursera since 2014 when he left his post as President of Yale University. Calico was created by Google back in 2013 to tackle human aging and diseases associated with age. “At Calico, I will work on the development of new computational methods for analyzing biological data sets, to help move to achieving these important scientific and societal goals,” said Koller in a blog post. 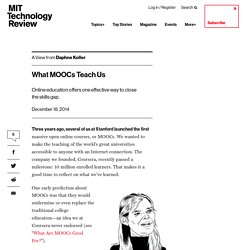 December 18, 2014 Three years ago, several of us at Stanford launched the first massive open online courses, or MOOCs. We wanted to make the teaching of the world’s great universities accessible to anyone with an Internet connection. The company we founded, Coursera, recently passed a milestone: 10 million enrolled learners. That makes it a good time to reflect on what we’ve learned. One early prediction about MOOCs was that they would undermine or even replace the traditional college education—an idea we at Coursera never endorsed (see “What Are MOOCs Good For?”). And it hasn’t happened—only 15 percent of our current learners are college age.

How do we create an educational experience suited to this very different population? We also need to find the right delivery method. Finally, we need to educate people on the value of this new type of credential. Daphne Koller is cofounder and president of Coursera. Daphne Koller: Technology as a Passport to Personalized Education. Our education system is in a state of crisis. 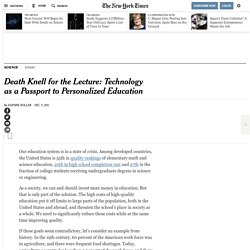 Among developed countries, the United States is 55th in quality rankings of elementary math and science education, 20th in high school completion rate and 27th in the fraction of college students receiving undergraduate degrees in science or engineering. As a society, we can and should invest more money in education. But that is only part of the solution. The high costs of high-quality education put it off limits to large parts of the population, both in the United States and abroad, and threaten the school’s place in society as a whole. We need to significantly reduce those costs while at the same time improving quality. If these goals seem contradictory, let’s consider an example from history.

The key to this transition was the use of technology—from crop rotation strategies to GPS-guided farm machinery — which greatly increased productivity. How can we improve performance in education, while cutting costs at the same time? Photo. Pinterest. International Women’s Day: Our Weeklong...