How About Orange. The folks who make Inkodye sent over a sample the other day. 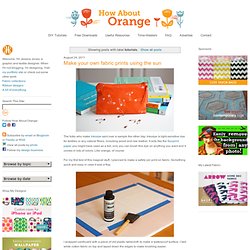 Inkodye is light-sensitive dye for textiles or any natural fibers, including wood and raw leather. It acts like the Sunprint paper you might have used as a kid, only you can brush this dye on anything you want and it comes in lots of colors. Like orange, of course. For my first test of this magical stuff, I planned to make a safety pin print on fabric. The Itch to Stitch: Archive. A fashionable sewing blog. Trash To Couture. Because I only want to sew stuff if it's for me. Nani IRO -Textile- Japanese Sewing, Pattern, Craft Books and Fabrics. 10 Japanese Sewing Patterns to Show Off Gorgeous Fabric - Sew in Love. DARUMA STORE - patterns. DARUMA STORE -横田株式会社公式通販- 手作りレシピ・無料型紙一覧. うねうねごろごろ. ハンドメイドどっとこむ－手作り雑貨の型紙・作り方 無料レシピ集－ 型紙,Katagami Patterns for Ladie`s ,LINNETの型紙,お洋服型紙. '15 5月 No 47 ７分丈パンツ XL 、3Lサイズが追加されました 型紙 セット '14 11月 No 101ショールカラーの前開きブラウス 型紙 セット '14 2月 No.99スタンドショールカラーのドレス 型紙 セット '13 10月 N97 Tote with square yoke 四角いヨークのトートバック 型紙 セット '13 7月 No 96 ワンポイントギャザーのバッグ 作り方 セット '13 6月. 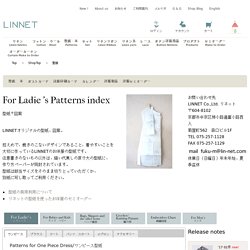 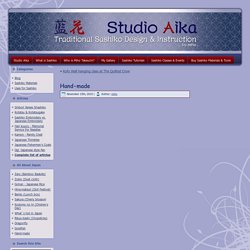 When I was little, my grand mother used to tell me after dinner when we were watching TV that her parents and siblings sat up late and did something by hands, sewing Yukata (cotton summer kimono), Zokin (cleaning rag) or Fukuro (fabric bags). They didn’t have TV so doing something and being productive was the way to spend their evening. Waraji are sandals or flip-flops made from straw rope; the standard footwear of the common people in Japan in past. I remember my mother made me help her by separating knitting yarns and making them into balls. She knit hats and mittens, sometimes sweaters for us. Zokin (dust cloth); old fabrics taken from worn-out kimono were layered and stitched by using Sashiko stitching. Generally, Japanese hand-made articles are well received. A basket to carry on its back called Shoi-kago. image: ja.wikipedia.org.

Sashiko lesson 1 » Sarah's Hand Embroidery Tutorials. Continued from Sashiko Fabric, needle, and thread: Stitching: How to begin, continue, and end:Traditionally, sashiko does not allow to start or end a stitch with a knot. 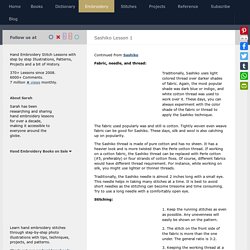 But, for the ease of it, we can use knots where the reverse of the fabric will not be used or shown. Sashiko: Traditional Japanese Sashiko Design & Instruction.

Complex Ojo de Dios. Maybe you’ve made a god’s eye with a couple popsicle sticks at camp one summer in the hazy past, but have you considered the beautifully vast possibilities of this art form? 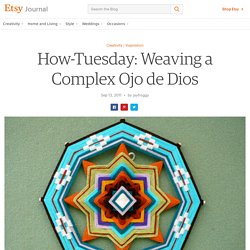 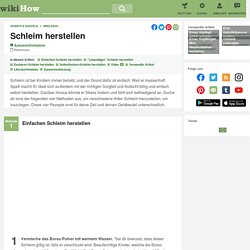 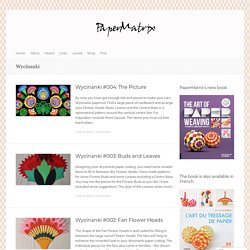 Find a large piece of cardboard and arrange your Flower Heads, Buds, Leaves and the Central Base in a symmetrical pattern around the vertical centre line. For inspiration I include three layouts. The stems you must cut free hand when… Designing your Wycinanki paper cutting, you need some smaller items to fill in between the Flower Heads. Paper Dolls - Cone Girls.

Looking like the cast of a glamorous school prom we present the cone girls! 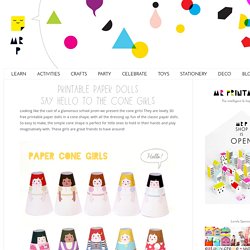 They are lovely 3D free printable paper dolls in a cone shape, with all the dressing up fun of the classic paper dolls. So easy to make, the simple cone shape is perfect for little ones to hold in their hands and play imaginatively with. Origami Instructions. This is a really nice traditional origami pop-up star. 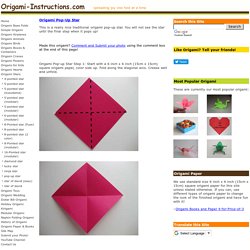 You will not see the star until the final step when it pops up! Pikachu Origami. If you ever wondered how to make a Pikachu origami, your search is over. 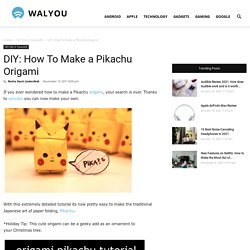 Thanks to synconi you can now make your own. With this extremely detailed tutorial its now pretty easy to make the traditional Japanese art of paper folding, Pikachu. Origami Camellia Folding Instructions - How to Fold an Origami Camellia. This origami camellia is a traditional origami flower. The camellia is highly valued in Japan and is often among the 1st flowers to appear in late winter. Made this origami? Comment and Submit your photo using the comment box at the end of this page! Other fun facts about camellia - Sacramento, CA is nicknamed the Camellia City and Camellia is the state flower of Alabama! Origami Lily Folding Instructions - How to make Origami Lily - Origami Flowers Folding Instructions. The origami lily is a classic and popular origami flower. Did you know that the lily family traditionally represented innocence and purity? Lilies can be found in a variety of hybrids and colors including yellow, pink, white, orange, purple, red and many others.

Made this origami? Comment and Submit your photo using the comment box at the end of this page! The origami lily is not too difficult to fold but beginners may find the petal fold slightly challenging. Origami Boxes, great as gift boxes and small containers.