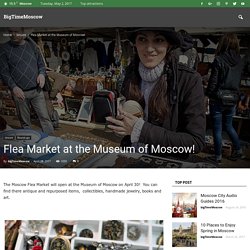 You can find there antique and repurposed items, collectibles, handmade jewelry, books and art. More than a hundred vendors are selling their wares right now here Zubovsky Boulevard 2. Operating hours 11.00- 19.00. Entrance is free.

The Most Effective Places TO Visit In Moscow. Visit Moscow Top Unexpected Monuments. The ‘Kind’ Pyramid A giant pyramid has been erected just 20 km outside the city of Moscow. 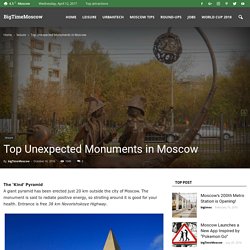 The monument is said to radiate positive energy, so strolling around it is good for your health. Entrance is free 38 km Novorishskoye Highway. Visit New Moscow Attractions - The Top 10 International Events in April. “Italian Week Festival” The “Italian Week Festival” festival will be held at the “Flacon” Design Factory on April 21 – April 23. 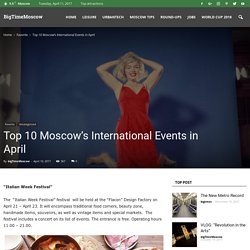 It will encompass traditional food corners, beauty zone, handmade items, souvenirs, as well as vintage items and special markets. What To Do in Case of Emergency When Traveling in Russia. We would like to say thank you to our friend Andy Frecka at Planet Russia for the article! 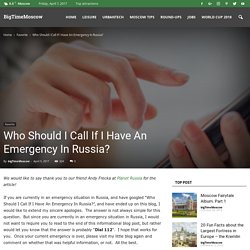 If you are currently in an emergency situation in Russia, and have googled “Who Should I Call If I Have An Emergency In Russia?” , and have ended up on this blog, I would like to extend my sincere apologies. The answer is not always simple for this question. But since you are currently in an emergency situation in Russia, I would not want to require you to read to the end of this informational blog post, but rather would let you know that the answer is probably “Dial 112“. I hope that works for you. For those of you who are not in an emergency situation or not in Russia, please feel free to pop some popcorn and read the rest of the explanation of emergency phone numbers in Russia. I have lived in Russia for 17 years, and happily have only needed to call an emergency number a few times over those years. Fortunately, the Aeroexpress train provides this information in both Russian and English. Enjoy Free Spring Events in April - New Moscow Attractions. 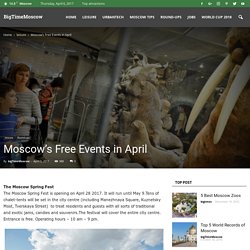 It will run until May 9.Tens of chalet-tents will be set in the city centre (including Manezhnaya Square, Kuznetsky Most, Tverskaya Street) to treat residents and guests with all sorts of traditional and exotic jams, candies and souvenirs.The festival will cover the entire city centre. 5 Things to Do Before You Enter the Moscow Metro. The subway is without a doubt the fastest mean of transport in Moscow. 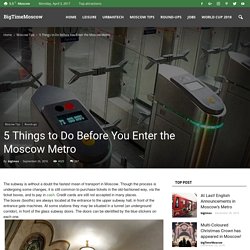 Though the process is undergoing some changes, it is still common to purchase tickets in the old-fashioned way, via the ticket boxes, and to pay in cash. Credit cards are still not accepted in many places. Moscow 3D Cabs - The New Moscow Tourist Attractions. 10 Awesome Places to Visit in Moscow At Spring. The Moscow Spring Fest The Moscow Spring Fest is opening on April 28 2017. 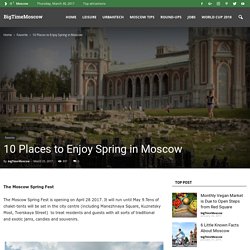 It will run until May 9.Tens of chalet-tents will be set in the city centre (including Manezhnaya Square, Kuznetsky Most, Tverskaya Street) to treat residents and guests with all sorts of traditional and exotic jams, candies and souvenirs. The Alexander Garden Strolling through Moscow, you’ll certainly go to the Alexander garden, because it links the two main attractions of Moscow- namely the Kremlin and Red Square. All-Russia Exhibition Park The All-Russia Exhibition Centre, also known as the VDNKh, is a national trading centre, amusement park and giant museum. Visit Moscow and Join The International Knight Festival. The International Knight Festival ‘Tournament of St. 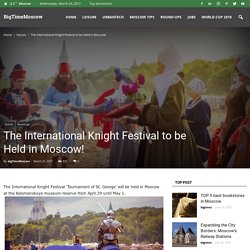 George’ will be held in Moscow at the Kolomenskoye museum-reserve from April 29 until May 1. Nine most famous knights from Russia, Norway and France will compete at the 3rd St. George International Tournament. Everything that happens at the tiltyard is for real: there are no staged fights and stunt tricks – there is only full contact and uncompromising battle for the champion title of St. George Tournament. St.

Ticket prices start at 2000 roubles. On the 3rd Sunday of each month most museums of Kolomenskoye offer free admission to all. How to get to Kolomenskoye: Take the Metro to the Kolomenskaya Station. For more details,please, click here. Welcome! Most Awaited Moscow Attractions - Top 10 Food Events in 2017. We have compiled a list of the greatest Moscow’s food events in 2017. 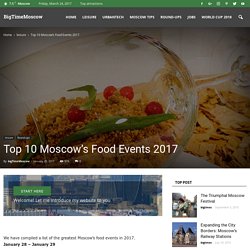 January 28 – January 29. Visit Moscow Spring Fest with Free Entrance Opening On April 28. Conservation Parks - Moscow Top Tourist Attractions Have You Visit. With the passage of time it has become increasingly common in cities like Moscow to designate areas of flora and fauna as conservation areas enclosed with tall fences, in order to literally save them from the big city. 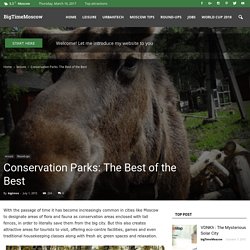 But this also creates attractive areas for tourists to visit, offering eco-centre facilities, games and even traditional housekeeping classes along with fresh air, green spaces and relaxation. As a result of the hard work and support of many people, one huge conservation park still exists within the city. It is called ‘Elk’s Island’ (Losiny Ostrov), as elks live there in their natural habitat, along with squirrels and peckers. The park seems endless, and is regarded by many as the biggest conservation park in Europe; it is certainly a secluded and leafy one.

With more than 50 species of animals, and 170 types of birds inhabiting the park, nature really thrives here. Must Visit Moscow's Best Markets in March. The Annual Moscow Flea Market The Annual Moscow Flea Market will be open in Moscow on March 23 – March 26 2017! You can find there antique and repurposed items, collectibles, handmade jewelry, books and art. More than a hundred vendors will be selling their wares at Tishinskaya Square 1. Entrance fee is 200 rubles . For more details,please,click here. Top 10 International Exhibitions to Visit in Moscow. Saint Louis and Relics of the Sainte-Chapelle March 2 – June 4 The Moscow Kremlin Museums present an exhibition introducing the greatest achievements of medieval culture of France to the Russian audience. 10 Amazing Places to Visit in Moscow in April 2017. Moscow Spring Festival The annual “Moscow Spring” festival will open on April 1.The festival will encompass more than 30 of special art and sports zones in the city centre.

The main pavilions will be placed at Kuznetsky Most, Tverskaya Square, Rozhdestvenka street, Ploshad Revolutsii.Entrance is free. Top 10 Amazing Hidden Buildings of Moscow. 1 The Menshikov Tower. It is also known as the Church of Archangel Gabriel. Menshikov tower was Moscow’s first building richly adorned with figurative sculpture. Most of it was lost in the 18th century. Moscow Travel Guide To Visit Unique Places. A full box of unforgettable experiences can be the best present from a foreign country. Moscow is a great place for one-off experiments, trips and walks. The Underground City The Moscow Underground City consists not only of tunnels and catacombs, but streets, small shops, squares and parking zones. Strategically located soviet era bunkers have become museums, some of which amuse their visitors with their huge spaces and integrated devices, while others are “real” museums with halls and exhibitions. Stalin’s luxurious bunker houses a conference hall, a conference room, an office, a resting room, the General’s office, supply rooms and a refectory.

Stalin worked there, and regarded it as a temporary residence during the Second World War. The bunker under the Central Pavilion at VDNKh is not as well-publicized, but can still be used for urgent purposes. 5th Kotelnichesky Lane 11 Sadovaya-Kudrinskaya 5 Oktyabrskaya St, 2/4. Visit Moscow Biggest Needlework Fair. Do Not Miss Space Exhibition - Open in Moscow Until March 12. Free Ice Skating Night to Be Held in Moscow on 1 March. Explore Top 5 World Records of The City of Moscow. Don't Miss to Visit The Ice Moscow Festival Open Until March 1. 10 Awesome Places to Visit in Moscow in February. “The Art Of The Brick” “The Art Of The Brick” is a global touring exhibition rated by CNN as one of the world’s “Must See Exhibitions.” It focus exclusively on the use of LEGO bricks as an art medium and artist Nathan Sawaya has taken it to new heights.The exhibition will open in Moscow on February 23 at Expocentre.

Best Places to Visit in Moscow at Sweet Valentines Day