Andrew Stanton: The clues to a great story. Dr. Horrible's Sing-Along Blog Clip: Act III. CakeBomb. 50 Video Ideas For YouTube and Beyond. There’s so much that goes into making and publishing a video, and sometimes the first step is the hardest – coming up with a great video idea. 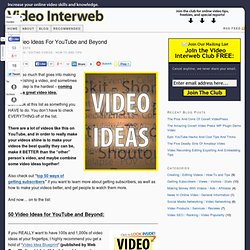 Don’t look at this list as something you HAVE to do. You don’t have to check EVERYTHING off of the list. There are a lot of videos like this on YouTube, and in order to really make your videos shine is to make your videos the best quality they can be, make it BETTER than the “other” person’s video, and maybe combine some video ideas together! Also check out “top 50 ways of getting subscribers” if you want to learn more about getting subscribers, as well as how to make your videos better, and get people to watch them more. And now… on to the list: If you REALLY want to have 100s and 1,000s of video ideas at your fingertips, I highly recommend you get a hold of “Video Idea Blueprint” (published by Web Core Media, which is VideoInterweb’s parent company).

Click on the image of the book to take a peek inside! What are some good YouTube video ideas. 7 Creative ideas for shooting Youtube videos (14 samples) 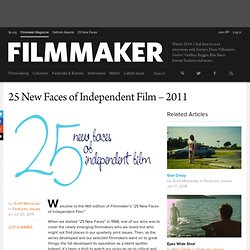 When we started “25 New Faces” in 1998, one of our aims was to cover the newly emerging filmmakers who we loved but who might not find places in our quarterly print issues. Then, as the series developed and our selected filmmakers went on to great things, the list developed its reputation as a talent spotter. Indeed, it’s been a thrill to watch our picks go on to critical and audience success, Sundance Grand Prizes, and even Academy Awards. But the list has another function too. As much as it is forward-looking, hoping to catch people early in what we think will be amazing careers, it’s also our personal and sometimes idiosyncratic snapshot of the current independent scene.

Particular trends this year? So, check out this year’s 25, and periodically revisit these pages as we’ll be updating them as new developments occur throughout the year. Alrick Brown. St. Elsewhere. St. 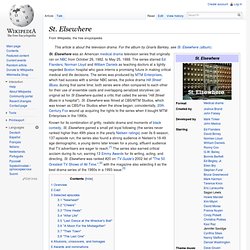 Elsewhere was an American medical drama television series that originally ran on NBC from October 26, 1982, to May 25, 1988. The series starred Ed Flanders, Norman Lloyd and William Daniels as teaching doctors at a lightly regarded Boston hospital who gave interns a promising future in making critical medical and life decisions. The series was produced by MTM Enterprises, which had success with a similar NBC series, the police drama Hill Street Blues, during that same time; both series were often compared to each other for their use of ensemble casts and overlapping serialized storylines (an original ad for St Elsewhere quoted a critic that called the series "Hill Street Blues in a hospital").

St. Elsewhere was filmed at CBS/MTM Studios, which was known as CBS/Fox Studios when the show began; coincidentally, 20th Century Fox wound up acquiring the rights to the series when it bought MTM Enterprises in the 1990s. Overview[edit] St. Story: Substance, Structure, Style and The Principles of Screenwriting (9780060391683): Robert McKee. Master Shots: 100 Advanced Camera Techniques to Get an Expensive Look on Your Low-Budget Movie (9781932907513): Christopher Kenworthy. Power Filmmaking Kit (9780240810218): Jason Tomaric. Film Crew: Fundamentals of Professional Film and Video Production (9780578033440): Nicholas George. THE TERRY GILLIAM SCHOOL OF FILM: 10 LESSONS FOR DIRECTORS TODAY. “Billy Wilder once said that there are only two things aging directors can’t avoid…awards and haemorroids [sic]. 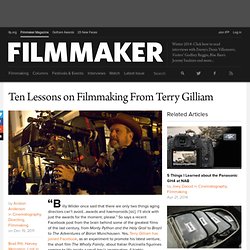 I’ll stick with just the awards for the moment, please.” So says a recent Facebook post from the brain behind some of the greatest films of the last century, from Monty Python and the Holy Grail to Brazil to The Adventures of Baron Munchausen. Yes, Terry Gilliam has joined Facebook, as an experiment to promote his latest venture, the short film The Wholly Family, about Italian Pulcinella figurines coming to life inside a small boy’s imagination. (I highly recommend following his status updates). Fortunately for Gilliam, he’s on the awards path, recently honored with the Golden Star Award of the 11th Annual Marrakesh International Film Festival. 1. As a child, I always drew funny creatures, funny characters. 2.