271.full. A New Look at the Neural Diathesis–Stress Model of Schizophrenia: The Primacy of Social-Evaluative and Uncontrollable Situations. Schizophrenia: Symptoms, Diagnosis, Treatment, and Views About Schizophrenia - Roanoke Nonverbal Communication. It is estimated that one in 100 persons will develop schizophrenia at some point in their lives, of which, 2 ½ million schizophrenic persons live in the United States. 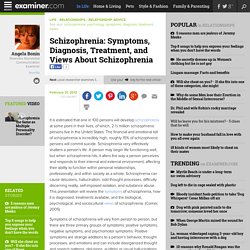 The financial and emotional toll of schizophrenia is incredibly high; roughly 15% of schizophrenic persons will commit suicide. Schizophrenia very effectively shatters a person's life. A person may begin life functioning well, but when schizophrenia hits, it alters the way a person perceives and responds to their internal and external environment, affecting their ability to function within personal relationships, professionally, and within society as a whole. 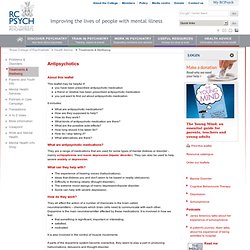 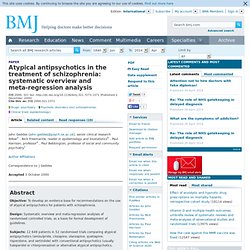 The term “atypical” was originally used to describe drugs that in animal models predict antipsychotic effects but do not produce catalepsy — most notably clozapine. It is also applied to drugs that are potentially more effective (particularly against depressive, negative, or cognitive symptoms) or better tolerated (especially causing fewer extrapyramidal side effects) than conventional antipsychotics or have a different pharmacological profile (such as blockade of serotonin 5-HT2 receptors). No definition is wholly satisfactory, partly because the term atypical is relative rather than absolute. We use the term simply to refer to clozapine and all the novel antipsychotics introduced in the past decade. Methods Inclusion criteria Search strategy. The Effects of Atypical Antipsychotic Drugs on Neurocognitive Impairment in Schizophrenia - Schizophrenia Bulletin - Volume 25, Number 2 / 1999 - APA Journals. 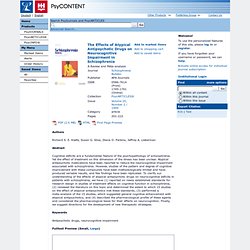 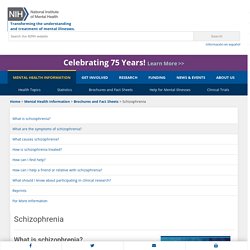 Schizophrenia is a chronic, severe, and disabling brain disorder that has affected people throughout history. About 1 percent of Americans have this illness.1 People with the disorder may hear voices other people don't hear. They may believe other people are reading their minds, controlling their thoughts, or plotting to harm them. How is Schizophrenia Diagnosed? Answer: The symptoms of schizophrenia can be very frightening for the person experiencing them, or for friends and loved ones observing them. 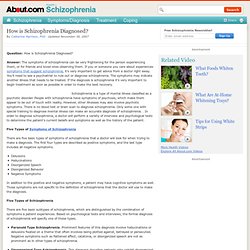 If you or someone you care about experiences symptoms that suggest schizophrenia, it’s very important to get advice from a doctor right away. You’ll need to see a psychiatrist to rule out or diagnose schizophrenia. The symptoms may indicate another illness that needs to be treated. If the diagnosis is schizophrenia it’s very important to begin treatment as soon as possible in order to make the best recovery. Clinical subtypes of schizophrenia: differences in brain and CSF volume. OBJECTIVE: Investigations of the relation of clinical features of schizophrenia to neuroanatomic measures have produced inconclusive results. 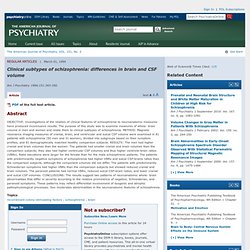 The purpose of this study was to examine measures of whole- brain volume in men and women and relate them to clinical subtypes of schizophrenia. METHOD: Magnetic resonance imaging measures of cranial, brain, and ventricular and sulcal CSF volume were examined in 81 patients with schizophrenia (50 men and 31 women), divided into subgroups based on their symptom profiles, and 81 demographically matched healthy comparison subjects. RESULTS: The men had higher cranial and brain volumes than the women. The patients had smaller cranial and brain volumes than the comparison subjects; they also had higher ventricular CSF volumes and thus higher ventricle-brain ratios (VBRs). Ratio elevations were larger for the female than for the male schizophrenic patients.

Types of Schizophrenia. The kinds of symptoms that are utilized to make a diagnosis of schizophrenia differ between affected people and may change from one year to the next within the same person as the disease progresses. 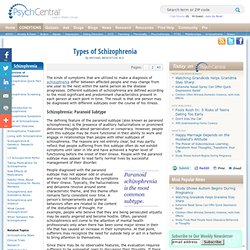 Different subtypes of schizophrenia are defined according to the most significant and predominant characteristics present in each person at each point in time. The result is that one person may be diagnosed with different subtypes over the course of his illness. At last, a promising alternative to antipsychotics for schizophrenia. Imagine that, after feeling unwell for a while, you visit your GP. 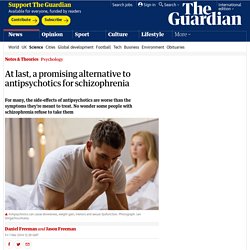 "Ah," says the doctor decisively, "what you need is medication X. It's often pretty effective, though there can be side-effects. You may gain weight. Or feel drowsy. Schizophrenia. About this leaflet This leaflet may be helpful if: you have a diagnosis of schizophreniayou think you might have schizophreniayou know someone with this diagnosisyou just want to know more about schizophrenia It covers: what it is like to have schizophreniawhat causes itwhat can helphow to help yourselfinformation for relatives Why do we use the “S” word? 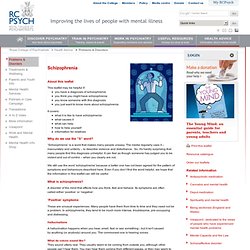 Link between father’s age and schizophrenia discovered. Children born to older fathers have a higher than normal risk of developing schizophrenia later in life, Swedish scientists said on Friday. They suspect that accumulating mutations in the sperm of older men add to the risk of their children suffering from the psychotic disorder.

"There is an association between paternal age and the risk of schizophrenia in the offspring," Professor Finn Rasmussen, of the Karolinska Institute in Stockholm, told. Other researchers have suggested such a link before but Rasmussen said his study of 700,000 people in Sweden is the largest and most significant. "On a population level this is important because of the increasing paternal age of the population," he added. Career demands and other factors have resulted in couples postponing having children. Rasmussen and his team, who reported their research in the British Medical Journal, estimated that the three-year age increase in the last 20 years could result in 12-15 percent more cases of schizophrenia.

Causes. Nobody knows exactly what causes schizophrenia, and it is likely to be the result of several factors. Some people might be more vulnerable to developing the illness than others when experiencing a stressful event, such as bereavement or the loss of a job. Research has been carried out into what factors make people more vulnerable to developing the illness. Brain chemistry, genetics, birth complications and social factors such as an urban upbringing, migration and adversity have all been considered. Recently, a strong link has been established between the use of strong cannabis and the development of schizophrenia. There are no compelling reasons to favour one cause over another, and current scientific opinion suggests that the illness is caused by a mix of factors. Schizophrenia. What is schizophrenia? When a doctor describes schizophrenia as a psychotic disorder, they mean that, in their view, you can’t tell your own intense thoughts, ideas, perceptions and imaginings from reality.

Views on schizophrenia have changed over the years. Questions have been asked about whether schizophrenia is one condition or more than one syndrome with related features. These questions drive both debate and research. Schizophrenia - Causes. The exact causes of schizophrenia are unknown, but research suggests that a combination of physical, genetic, psychological and environmental factors can make people more likely to develop the condition.

Current thinking is that some people may be prone to schizophrenia, and a stressful or emotional life event might trigger a psychotic episode. However, it is not known why some people develop symptoms while others do not. Increased risk. Cause and Prevention. Research/Digest/Effective/Ciompi/LCiompiPsychiatry1997.pdf. Models of Madness: Psychological, Social and Biological Approaches to ... John W. PsycNET - Display Record.