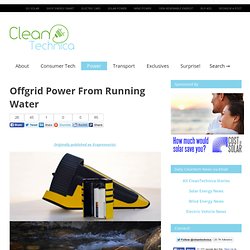 There are plenty of plug-n-play options using renewable energy to provide offgrid power, but most of them rely on solar or thermoelectric energy, which may not always be the most appropriate choice, depending on the location and situation. Fossil Fuels Will Not Help The Working Class. Renewables Might. Gurit Composites/CC BY-ND 2.0 Having posted about Obama's false choice between political dominance and pleasing his green base, I got into a spat on twitter with someone who insisted that fracking was our only path for helping "struggling Americans" and avoiding economic calamity.

Ignoring the fact that climate instability will have a ruinous impact on our economy and is already leaving Americans struggling, we must once-and-for-all dispense with the notion that fossil fuels are the job creator of choice for economic growth. We've already seen reports that show the UK economy faring better with a wind-powered future than a gas-powered one, and the growth of the global environmental sector is one of the few economic success stories of the last few years. So a story from renewable energy pioneers Ecotricity caught my eye yesterday, revealing how a relatively modest scheme is providing apprenticeships and training for the clean energy jobs of the future.

Energy producing buildings – Innovation in construction – part 2. In my first post I linked to a TEDx talk by an architect who showed a lot of innovative ideas to construct more sustainable buildings and cities. 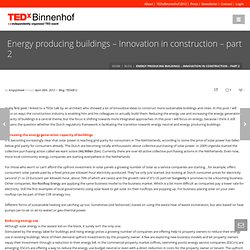 In this post I will focus on ways the construction industry is enabling him and his colleagues to actually build them. Reducing the energy use and increasing the energy generation capacity of buildings is a central theme, but the focus is shifting towards more integrated approaches. In this post I will focus on energy, because I think it still remains the question whether the Dutch regulatory framework is facilitating the transition towards energy neutral and energy producing buildings.

Increasing the energy generation capacity of buildings It is becoming increasingly clear that solar power is reaching grid parity for consumers in The Nethterlands, according to some the price of solar power has fallen below grid parity for consumers already. Scientific American: The human cost of energy. Energiedoden Energy doesn’t only cost money, it also costs human lives. 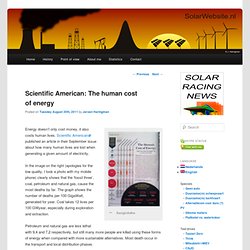 Scientific American published an article in their September issue about how many human lives are lost when generating a given amount of electricity. In the image on the right (apologies for the low quality, I took a photo with my mobile phone) clearly shows that the ‘fossil three’, coal, petroleum and natural gas, cause the most deaths by far. The graph shows the number of deaths per 100 GigaWatt, generated for year. Coal takes 12 lives per 100 GWyear, especially during exploration and extraction. Google To Build New 'Green' Office Designed By Ingenhoven Architects. 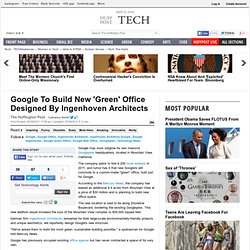 The company plans to hire 6,200 more workers in 2011, and rumor has it that new Googlers will commute to a custom-made "green" office, built just for Google. According to the Mercury News, the company has leased an additional 9.4 acres from Mountain View at a price of $30 million and is planning to build new office space. The new location is said to be along Shoreline Boulevard, bordering the existing Googleplex.

Why Sustainability Is Now the Key Driver of Innovation - Harvard. The Idea in Brief • Sustainability isn’t the burden on bottom lines that many executives believe it to be. 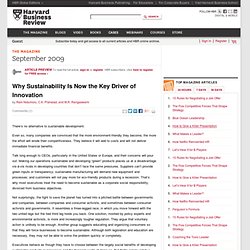 In fact, becoming environment-friendly can lower your costs and increase your revenues. That’s why sustainability should be a touchstone for all innovation. • In the future, only companies that make sustainability a goal will achieve competitive advantage. That means rethinking business models as well as products, technologies, and processes. Aanmelden bij Rijksduurzaamheidsnetwerk - Rijksduurzaamheidsnetw. Energy. Download gratis - In het oog van de orkaan. Interview met Roefie Hueting. Een Fair & Green Deal. Forget oil, the new global crisis is food. A new crisis is emerging, a global food catastrophe that will reach further and be more crippling than anything the world has ever seen.

The credit crunch and the reverberations of soaring oil prices around the world will pale in comparison to what is about to transpire, Donald Coxe, global portfolio strategist at BMO Financial Group said at the Empire Club’s 14th annual investment outlook in Toronto on Thursday. “It’s not a matter of if, but when,” he warned investors.