NOAA Study Confirms Global Warming Speed-Up Is Imminent. A major new study from NOAA finds more evidence that we may be witnessing the start of the long-awaited jump in global temperatures. 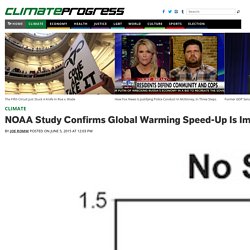 As I reported in April, many recent studies have found that we are about to enter an era of even more rapid global warming. Indeed, one March study, “Near-term acceleration in the rate of temperature change,” warns the speed-up is imminent — with Arctic warming rising a stunning 1°F per decade by the 2020s. The new study in Science from a team of NOAA scientists, “finds that the rate of global warming during the last 15 years has been as fast as or faster than that seen during the latter half of the 20th Century,” as NOAA explains.

What happens when these various temporary factors stop? Karl explained: “Once these factors play out, and they may have already, global temperatures could rise more rapidly than what we have seen so far.” The Effects of Global Warming. Global warming is expected to have far-reaching, long-lasting and, in many cases, devastating consequences for planet Earth. 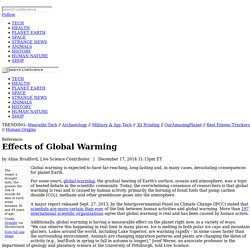 For some years, global warming, the gradual heating of Earth's surface, oceans and atmosphere, was a topic of heated debate in the scientific community. Today, the overwhelming consensus of researchers is that global warming is real and is caused by human activity, primarily the burning of fossil fuels that pump carbon dioxide (CO2), methane and other greenhouse gases into the atmosphere. A major report released Sept. 27, 2013, by the Intergovernmental Panel on Climate Change (IPCC) stated that scientists are more certain than ever of the link between human activities and global warming. Northern Hemisphere Sea Ice Area. The Most Fundamental Evidence For Global Warming. Republicans Tired Of Climate Change Deniers Launch Initiative For Global Warming Action, Carbon Price. 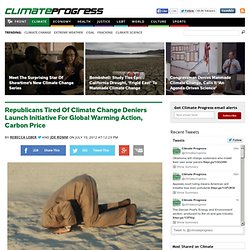 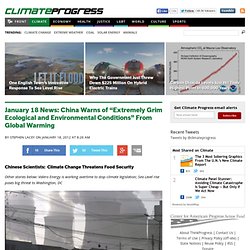 Study: global warming related sea level rise poses big threat to Washington, D.C. For the Washington area, no snow in sight in a winterless winter This has been a winterless winter, a season that can’t make it past lunchtime without busting out in a springtime melody. WWF accused of failing to regulate sustainable timber scheme. Conservation group WWF let timber companies use its panda brand logo while they were razing some of the world's most biologically rich rainforests or trading in potentially illegally sourced timber, according to the investigative group Global Witness. 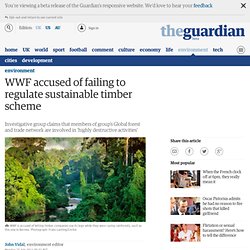 The WWF's flagship Global forest and trade network (Gftn), which is part-subsidised by the US government and EU, promotes sustainable timber, bringing together more than 70 international logging companies and large numbers of timber sellers. The WWF says the 20-year-old scheme is now responsible for nearly 19% of forest products bought or sold internationally, with members' combined annual sales approaching $70bn (£43bn). However, Global Witness's report, Pandering to the Loggers, claims Gftn's membership and participation rules are inadequate, allowing companies to systematically abuse the scheme. 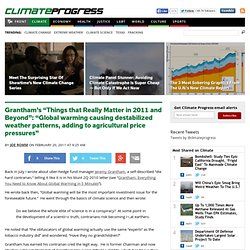 He wrote back then, “Global warming will be the most important investment issue for the foreseeable future.” He went through the basics of climate science and then wrote: 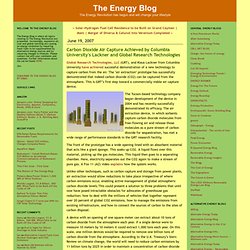 The "air extraction" prototype has successfully demonstrated that indeed carbon dioxide (CO2) can be captured from the atmosphere. This is GRT’s first step toward a commercially viable air capture device. The Tucson-based technology company began development of the device in 2004 and has recently successfully demonstrated its efficacy. The air extraction device, in which sorbents capture carbon dioxide molecules from free-flowing air and release those molecules as a pure stream of carbon dioxide for sequestration, has met a wide range of performance standards in the GRT research facility. The front of the prototype has a wide opening lined with an absorbent material that acts like a giant sponge.