How electric cars could become a giant battery for renewable energy. The United States now has more than 35GW of installed wind energy, enough to power close to 10 million homes. 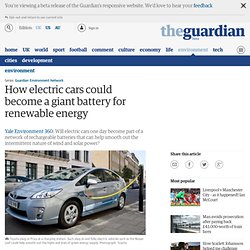 Close on the heels of this ongoing renewable energy revolution is another green technology: By next year tens of thousands of Nissan LEAFs, Chevy Volts, and other electric vehicles will start rolling off assembly lines. The electricity generation and transportation sectors may seem like two disparate pieces of a puzzle, but in fact they may end up being intimately related. Sign In. Learn a thing or two at Autodesk's free online Sustainability Workshop. Autodesk's Sustainability Workshop is a free online site with short videos to educate viewers on the environmental impacts of design. 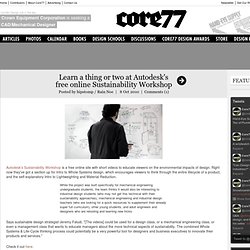 Energy Generating Desert Towers Harvest the Sun and Wind. Dubai is a hub for bold architecture. 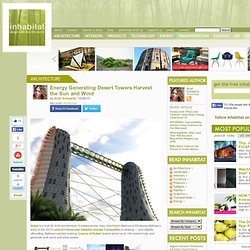 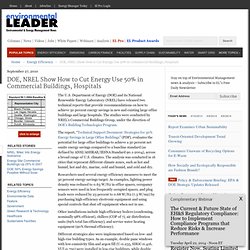 Department of Energy (DOE) and its National Renewable Energy Laboratory (NREL) have released two technical reports that provide recommendations on how to achieve 50 percent energy savings in new and existing large office buildings and large hospitals. The studies were conducted by NREL’s Commercial Buildings Group, under the direction of DOE’s Building Technologies Program. 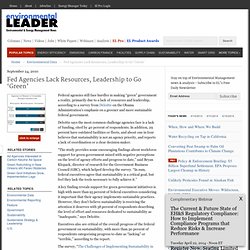 Deloitte says the most common challenge agencies face is a lack of funding, cited by 40 percent of respondents. In addition, 29 percent have outdated facilities or fleets, and about one in four believes that sustainability is not an agency priority, and reports a lack of coordination or a clear decision maker. “The study provides some encouraging findings about workforce support for green government mixed with negative perceptions on the level of agency efforts and progress to date,” said Bryan Klopack, director of research for the Government Business Council (GBC), which helped develop the survey. “In sum, federal executives agree that sustainability is a critical goal, but feel they lack the tools necessary to fully achieve it.” Clinton Global Initiative: 1,000 Green Products, Renewable Energy for Emerging Nations · Environmental Leader · Green Business, Sustainable Business, and Green Strategy News for Corporate Sustainability Executives. 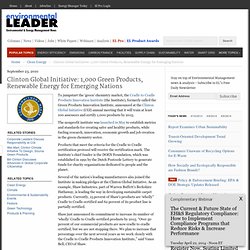 The nonprofit institute was launched in May to establish metrics and standards for creating safer and healthy products, while fueling research, innovation, economic growth and job creation in the green chemistry sector. Products that meet the criteria for the Cradle to Cradle certification protocol will receive the certification mark. The Institute’s chief funder is the DOEN Foundation, which was established in 1991 by the Dutch Postcode Lottery to generate funds for charity organizations dedicated to people and the planet. Several of the nation’s leading manufacturers also joined the Institute in making pledges at the Clinton Global Initiative. Click here for more CGI news. Stickers for Buildings: Monitoring Environmental Impact · Environmental Leader · Green Business, Sustainable Business, and Green Strategy News for Corporate Sustainability Executives.

Cars Have Mileage Ratings – Why Don’t Buildings Have the Same for Carbon Emissions? 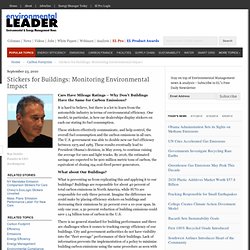 It is hard to believe, but there is a lot to learn from the automobile industry in terms of environmental efficiency. One model, in particular, is how car dealerships display stickers on each car stating its fuel consumption. These stickers effectively communicate, and help control, the overall fuel consumption and the carbon emissions in all cars. 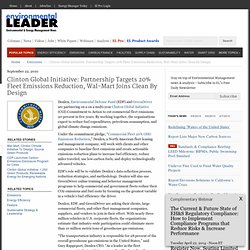 By working together, the organizations expect to reduce fuel expenditures, petroleum consumption, and global climate change emissions. Under the commitment pledge, “Commercial Fleet 20% GHG Emissions Reduction,” Donlen, a North American fleet leasing and management company, will work with clients and other companies to baseline fleet emissions and create actionable emissions reduction plans to increase fuel efficiency, reduce miles traveled, use low-carbon fuels, and deploy technologically advanced vehicles. Rijksduurzaamheidsnetwerk. Green movement needs a different approach to appeal beyond the usual audience. What if the biggest obstacle to solving climate change was the environmental movement itself? 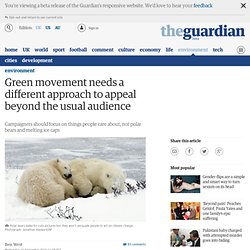 You know what I'm talking about- the yearly cycle of petitions and celebrity endorsements, the "big" campaigns that only those of us in the world of campaigning ever hear about, and "humorous" stunts where only the organisers understand the joke. Solving climate change? Sometimes it feels more like being part of a stamp collecting club. The year of the Copenhagen climate summit, 2009, was the biggest opportunity we've had in years to build a lasting movement for change. Over last year, we saw the positivity and the power of campaigns which managed to bring together thousands of people from every walk of life.

In the months since then, I've become convinced that the movement for a cleaner, fairer future needs to change if it's going to succeed. A few hundred yards away from the Houses of Parliament yesterday, the UK Youth Climate Coalition's Adopt an MP project began to show a new way forward.

Solar panels you can install with a clear conscience. With the government offering to pay you – and some companies even offering to fit them for free – you may be considering installing solar photovoltaic panels on your roof. 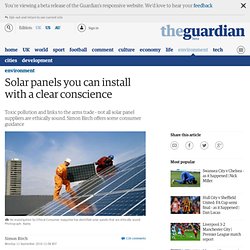 But if you are, would you really want to buy one from a company that's been responsible for one of the biggest recent environmental cock-ups on the planet or one that's up to its neck in the arms trade? No of course you wouldn't. Green heroes working for the right kind of environmental change. Faced with the mind-numbing bad news about the environment over recent months, a couple of us at the Guardian decided to try to cheer ourselves up by finding examples of the right kind of environmental change. We set out to find 50 green pioneers, people who are making a practical difference but whose work is not yet widely known. Here's a small selection of the projects that remind us that all is not yet lost – the first 10 are people whose initiatives we find particularly inspiring. Duurzaamheid leidt tot meer wooncomfort en lagere energielasten. News You Can Use: Organic Doesn't Mean "Grown Without Pesticides"

As an example, Wells Fargo recently said its involvement with companies engaged in mountaintop removal mining would be “limited and declining,” according to the article. However, the bank was a small player in the sector, representing about $78 million in bonds and loan financing for these companies from 2008 to April 2010, according to the Rainforest Action Network. But mining associations and companies involved in mountaintop removal mining told the newspaper that they aren’t having any trouble getting financing for their projects. ASN Bank - Nieuws (actueel & persberichten) > 30-08-10 A> ASN Bank blij over negatief besluit mijnbouw. Join us as we Power IT Down on August 27, 2010. RePublic. Frits van Luxemburg van EZ over duurzaamheid - Inspiratie - Actueel - Het Buitenhuis. GGGI. GE, Partners Launch $200M Smart Grid Innovation Challenge · Environmental Leader · Green Business, Sustainable Business, and Green Strategy News for Corporate Sustainability Executives.

Alistair Darling said in his budget speech that a further £1bn at least would be sought from the private sector to pump into the new bank, which he hoped would open for business in the autumn of 2011. Nu even politieke wil, graag. Sustainable Entrepreneurship i. Open AccessThis article isfreely availablere-usable Article 1 Department of Management and Organisation Business Studies, Faculty of Economics and Business Administration, VU University Amsterdam, De Boelelaan 1105, 1081 HV, Amsterdam, The Netherlands 2 TNO Built Environment and Geosciences, Van Mourik Broekmanweg 6, 2628 XE, Delft, The Netherlands Received: 1 December 2009; Accepted: 22 January 2010 / Published: 4 February 2010 Abstract: This article discusses the strategies that sustainable entrepreneurs use to interact with their environment in the Dutch construction industry.