Why cheap oil will not wreck the prospects for renewable energy – this time around - EnergyPost.eu. Solar light collector Shanghai World Expo, photo: Daniel Foster When oil prices collapsed in the 1980s, most large renewable energy programs were dismantled. 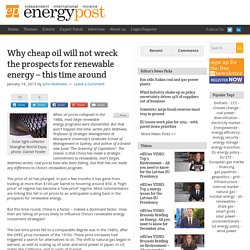 But that won’t happen this time, writes John Mathews, Professor of Strategic Management at Macquarie University’s Graduate School of Management in Sydney, and author of a brand new book “The Greening of Capitalism”. The reason is that China has made a strategic commitment to renewables. Why cheap oil will not wreck the prospects for renewable energy – this time around - EnergyPost.eu. China Is #1 In Renewable Energy Investment, US #2, Japan #3 (CHART) Clean Power Published on April 5th, 2014 | by Guest Contributor April 5th, 2014 by Guest Contributor With record-breaking solar installations in the US, and solar actually coming in as the #2 source of new electricity capacity in 2013, you might think the US was the #1 market in the world for renewable energy investment. 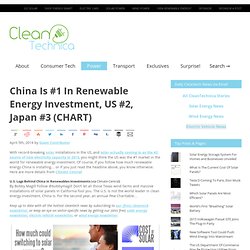 China installed more solar panels in 2013 than any country ever has. Commercial PV In China Primed For Growth Surge. Buildings Published on August 26th, 2013 | by Cynthia Shahan China’s Bureau of Energy has announced a designated group of Distributed PV Generation Application Demonstration parks. 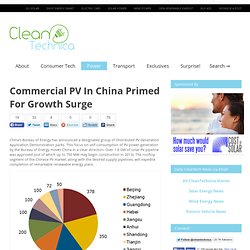 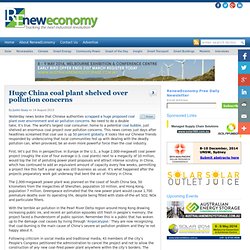 No need to do a double take, it’s true. The world’s largest coal consumer, home to a potential coal bubble, just shelved an enormous coal project over pollution concerns. This news comes just days after headlines screamed that coal use is up 50 percent globally. It looks like our Chinese friends responded by underscoring that local communities fed up with dealing with the deadly pollution can, when provoked, be an even more powerful force than the coal industry. Walmart commits to scale sustainability of global supply chain. Editor's Note: To learn more about smart supply chains and hear from Elizabeth Fretheim, director of business strategy & sustainability with Walmart, don't miss VERGE@Greenbuild Nov. 12-13. 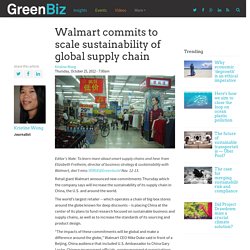 Retail giant Walmart announced new commitments Thursday which the company says will increase the sustainability of its supply chain in China, the U.S. and around the world. The world’s largest retailer -- which operates a chain of big-box stores around the globe known for deep discounts – is placing China at the center of its plans to fund research focused on sustainable business and supply chains, as well as to increase the standards of its sourcing and product design. “The impacts of these commitments will be global and make a difference around the globe,” Walmart CEO Mike Duke said in front of a Beijing, China audience that included U.S. Ambassador to China Gary Locke, Chinese government officials, nongovernmental organizations, suppliers and academics.

U.S. China Will Create Emission Trading System, Link to European Union. Air Quality Published on September 21st, 2012 | by Silvio Marcacci China, the world’s largest emitter of carbon dioxide, has signed a financing deal with the European Union to reduce greenhouse gases through a variety of projects, including developing an emission trading system to link with the EU’s Emission Trading Scheme (ETS). 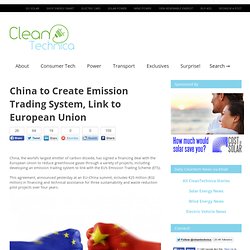 This agreement, announced yesterday at an EU–China summit, includes €25 million ($32 million) in financing and technical assistance for three sustainability and waste reduction pilot projects over four years. Reducing Emissions, Pollution, Waste The centerpiece of this deal is unquestionably the effort to design emissions trading systems across China, which could lead to a national program that would then be linked to the EU’s existing ETS.

Chinese protesters force officials to cancel industrial waste pipeline project. Chinese environmental protesters stand on cars in Qidong. Photograph: Carlos Barria/Reuters Officials in eastern China have cancelled a planned industrial waste pipeline project after up to 1,000 environmental demonstrators occupied a government office, overturned cars, destroyed computers and beat police officers. The demonstration in the city of Qidong was the latest in a string of protests sparked by fears of environmental degradation. Zhang Guohua, mayor of the eastern city of Nantong, announced the cancellation of the pipeline, which would have emptied waste water from a Japanese-owned paper factory via the coastal town of Qidong into the sea.

India records world-beating green energy growth. India's transformation into a cleantech powerhouse moved up a gear in 2011 when it racked up investments of $10.3bn in the sector, a growth rate of 52 per cent year on year that dwarfed the rest of the world's significant economies. 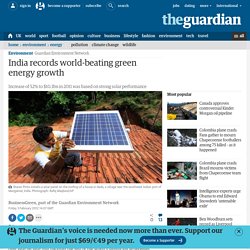 Solar investments led the growth with a seven-fold increase in funding, from $0.6bn in 2010 to $4.2bn in 2011, just below the $4.6bn invested in wind during the year, according to figures released yesterday by analysts Bloomberg New Energy Finance (BNEF). A record 2,827MW of wind energy capacity was added in 2011, which kept India third behind China and the US in terms of new installations. November 4 News: China To Phase Out Energy-Sucking Incandescent Lightbulbs. By Stephen Lacey on November 4, 2011 at 10:28 am "November 4 News: China To Phase Out Energy-Sucking Incandescent Lightbulbs" Other stories below: Morocco to Host Massive Solar Farm; Plummeting Clean Energy Shares Exaggerate Risk China will phase out energy-draining light bulbs China will phase out power-draining light bulbs within five years in a move to make the world’s biggest polluting nation more efficient but also certain to impact the global market.China will ban imports and sales of 100-watt-and-higher incandescent bulbs from Oct. 1, 2012, in an attempt to save energy and curb climate change, China’s main planning agency said Friday.Bans will also be imposed on 60-watt-and-higher bulbs from Oct. 1, 2014 and 15-watt-and-higher old-style bulbs from Oct. 1, 2016. 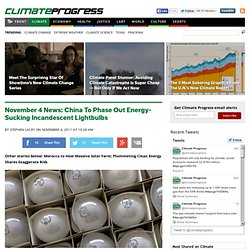 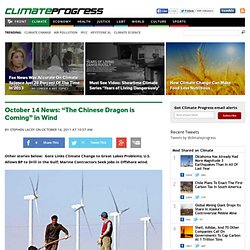 Allows BP to Drill in the Gulf; Marine Contractors Seek Jobs in Offshore wind. China Targets GE Wind Turbines With $15.5 Billion War Chest China has taken on General Electric Co. and Western peers that control the $70 billion wind-turbine market, striving to repeat its 2010 coup when the Asian nation sold more than half the world’s solar panels for the first time.Armed with at least $15.5 billion in state-backed credit, China’s biggest windmill makers Sinovel Wind Group Co. and Xinjiang Goldwind Science & Technology Co. won their first major foreign orders in the past year. Sinovel and Goldwind may counter the quality concerns of customers and overtake Denmark’s Vestas Wind Systems A/S as the biggest supplier by 2015, a Bloomberg New Energy Finance survey forecast.

Is Gulf seafood safe to eat? U.S. Winds Of Change Blowing From China, Where Else? by EU Energy Policy Blog. China may not be where cutting edge research takes place or innovative technologies emerge, and Chinese manufacturers are not usually the first to develop and market new products. 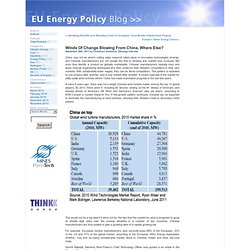 But once they identify a product as globally marketable, Chinese manufacturers typically copy and apply reverse engineering techniques and then undercut their Western competitors in their own markets. With substantially lower wages, they can be fierce competitors. This pattern is repeated to one product after another, and in one market after another.

This package is designed to address China’s competitive disadvantages in technology innovation particularly with the United States. This new plan aims to address the fact that in many current market sectors the technology gap between Chinese firms and the current market leaders is so large that it’s almost impossible for the Chinese to compete. China is Kicking Our A@$ in Clean Energy: The Infographic. Infographic by One Block Off the Grid. With 80% Jump in Venture Funding Since 2009, China Emerges as Early-Stage Investor, Not Just Manufacturer, of Cleantech.

By Stephen Lacey on July 20, 2011 at 4:15 pm "With 80% Jump in Venture Funding Since 2009, China Emerges as Early-Stage Investor, Not Just Manufacturer, of Cleantech" The U.S. is extraordinarily good at nurturing entrepreneurship and invention, but not as good at building industries around those inventions. Case in point: While America leads in venture capital investments in clean energy, it has ceded leadership in manufacturing and deployment to European and Asian countries.

Given the powerful impact globalization has had on moving manufacturing of consumer electronics, steel and automobiles out of the U.S., the dominance of Asian countries in clean-energy manufacturing isn’t a big surprise. Let’s Compete on Innovation Rather Than Patents. The next generations of telecom technologies are called “LTE” or “4G”.

China’s Huawei believes that by 2015, it will hold 15–20% of the worldwide patents in these technologies, and that these will earn it at least 1.5% of the sales price of every device—every cell phone, laptop, and tablet—that uses them. Huawei is on track to achieve its goals: in 2007, it held just 152 patents; by the end of 2009, it had applied for 42,543 patents, of which 11,339 had been granted in China, 215 in the United States, and 1282 in Europe. Huawei’s rival, ZTE, claims to hold 7% of the world’s LTE patents and plans to increase this to 10% by 2012. Emboldened by these successes, the Chinese government has initiated a nationwide program to make China the world leader in patents in every important industry.

The New York Times reported that the government is offering cash bonuses, better housing, and tax breaks to individuals and companies filing the most patent applications. The Times quotes David J. Rare earth metals mine is key to US control over hi-tech future. It's a deep pit in the Mojave desert. But it could hold the key to America challenging China's technological domination of the 21st century. The Shortest Route to Prison? 140 Characters. Twitter gaffe: US embassy announces 'crazy bad' Beijing air pollution. Traffic clogs Beijing as a heavy haze hangs over the city. China winning global race for green jobs. China is prevailing in the global race for green jobs in sectors from solar panels to advanced lighting, and appears to be on an unstoppable upward path, an annual report by cleantech research firm Clean Edge said on Wednesday. The Chinese government spent $34.6 billion last year to propel its low-carbon economy, more than any other nation and almost double what the U.S. invested.

China’s 863 Program, a crash program for clean energy : The New. On March 3, 1986, four of China’s top weapons scientists—each a veteran of the missile and space programs—sent a private letter to Deng Xiaoping, the leader of the country. China (Again) Wants to Help Build California's Railways - But Le. King's Cross to Beijing in two days on new high-speed rail netwo.

America's Brightest Running To China, Where The High Tech Resear.