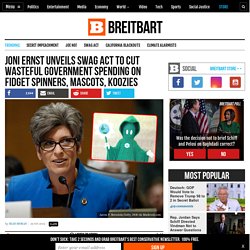 The bill, known as the Stop Wasteful Advertising by the Government (SWAG) Act, prohibits the federal government from spending money to create a “mascot” to promote an agency, as well as producing swag such as fidget spinners, koozies, and mascots. “I am rolling out a new bill in my efforts to hold the federal government more accountable and watch our spending,” Ernst said.

“It is called the SWAG Act. It is the Stop Wasteful Advertising by the Government Act, and what a lot of folks don’t realize is that the federal government spends over $1.4 billion on public relations and advertising campaigns. That is twice the amount that is dedicated to breast cancer research, and while I’m all about the mascots and things like that of course as an Iowa State Cyclone fan and you know what? Pelosi calls for Congress to pass resolution supporting two-state solution to Israeli-Palestinian conflict. Hard-Left Congressional Candidates in New York Want Police Disarmed. The insanity grows in socialist New York. 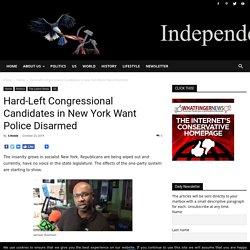 Republicans are being wiped out and currently, have no voice in the state legislature. The effects of the one-party system are starting to show. A Democratic primary candidate for New York’s 16th congressional district, Jamaal Bowman, called for disarming the police in an absurd response to the police officer’s killing of a woman in her own home in Ft. Worth. He is challenging Eliot Engel in the primary since the AOC+3 squad decided Engel, a far-left man, is not far-left enough. Bowman, a hard-left ‘Democratic Socialist’ is backed by the Justice Democrats, the same hard-left progressive group that supported U.S. Democratic Socialists are to the left of the Communist Party USA. Manhattan Institute legal policy expert Rafael Mangual called Bowman’s proposal “nonsensical,” the Washington Free Beacon reported. Pelosi's meeting melodrama was a 'disservice to women,' New York Post columnist says.

A New York Post columnist thinks that despite the left’s adoration of Nancy Pelosi over the viral photo of her pointing at President Trump, the House Speaker has actually done a “disservice” to women. 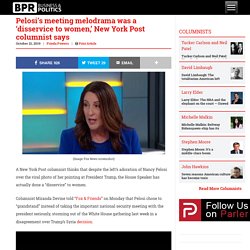 Columnist Miranda Devine told “Fox & Friends” on Monday that Pelosi chose to “grandstand” instead of taking the important national security meeting with the president seriously, storming out of the White House gathering last week in a disagreement over Trump’s Syria decision. Watch the latest video at <a href=" (Video: Fox News) EXCLUSIVE: Pelosi issues statement on Schiff: ‘What the House GOP fears the most is…’

Below is a report that DML News gives a 4 OUT OF 4 STARS trustworthiness rating. 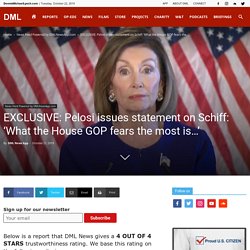 We base this rating on the following criteria: Provides named sources Reported by more than one notable outlet Does not insert opinion or leading words Includes supporting video, direct statements, or photos Click here to read more about our rating system. Rep. Andy Biggs: Schiff 'Poisoned the Well' on Impeachment - He is 'Not Respected' On 22nd October 2019 @ 1.00am © press Rep. 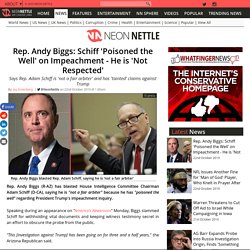 Andy Biggs (R-AZ) has blasted House Intelligence Committee Chairman Adam Schiff (D-CA), saying he is "not a fair arbiter" because he has "poisoned the well" regarding President Trump's impeachment inquiry. Speaking during an appearance on "America's Newsroom" Monday, Biggs slammed Schiff for withholding vital documents and keeping witness testimony secret in an effort to obscure the probe from the public.

"This [investigation against Trump] has been going on for three and a half years," the Arizona Republican said. "[Schiff] himself has basically tainted the well here because he's the guy who said for two years that there was... clear evidence of collusion. "And it turns out that wasn't true. " Rep. Biggs Garners Support Of 173 Co-Sponsors To Censure Schiff. Members of the U.S. 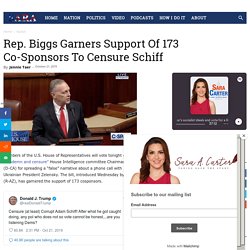 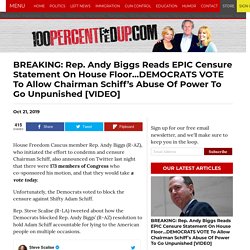 Andy Biggs (R-AZ), who initiated the effort to condemn and censure Chairman Schiff, also announced on Twitter last night that there were 173 members of Congress who co-sponsored his motion, and that they would take a vote today. Unfortunately, the Democrats voted to block the censure against Shifty Adam Schiff. Rep. Trump should ask Congress to approve military intervention in Syria, if members want it so badly. The House of Representatives voted 354 to 60 on Oct. 16 to condemn President Donald Trump’s pullback of U.S. troops from eastern Syria as “beneficial to adversaries of the United States government.” 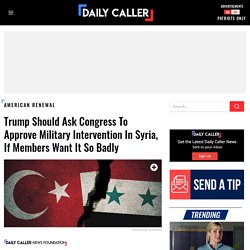 Democratic Rep. Eliot Engel of New York, chairman of the House Foreign Affairs Committee, proclaimed, “At President Trump’s hands, American leadership has been laid low, and American foreign policy has become nothing more than a tool to advance his own interests.” Democrat-Controlled House Passed Bill with 'Quid Pro Quo' on Election Interference. But the Democrat-controlled U.S. 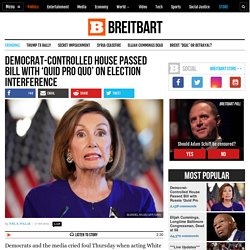 House of Representatives passed a bill in September that imposes restrictions on transactions with Russia until it had been cleared of election interference. The House bill amended an earlier Senate bill — S. 1790, the “National Defense Authorization Act for Fiscal Year 2020” — that required the Director of National Intelligence (DNI) to investigate possible Russian interference in elections. In the House version, all “United States persons” are prohibited “from engaging in transactions with, providing financing for, or in any other way dealing in Russian sovereign debt” after a certain date. In other words, the Democrat-controlled House would suspend transactions — both public and private — with Russia’s government until the U.S. can be satisfied that Russia had not interfered with the most recent federal election.

To Democrats and the media, it was a “quid pro quo” — and grounds for impeachment. Joel B. Navarro Pushes Pelosi to Pass US-Mexico-Canada Agreement. “The U.S. 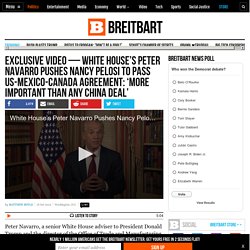 -Mexico-Canada agreement is far more important than any China deal,” Navarro says in the video, provided exclusively to Breitbart News. “America has almost twice the amount of trade with Canada and Mexico than it does with China, but more importantly the U.S. exports five times as many products to Mexico and Canada than it does to China, where trade is a one-way street moving in the wrong direction. There are only a few days left in the legislative calendar before the end of 2019.

Democrats Throw A Temper Tantrum After Trump Puts Pelosi In Her Place At White House Meeting. President Trump didn’t hold back in a meeting at the White House with Democrats and Republicans on Wednesday and it got so heated that Pelosi and the Democrat leadership melted down. The Democrats went to the White House thinking they were going to boss the PResident around and they ended up getting shown the door.

Trump Tweets: ‘The Do Nothing Democrats’ and ‘Nervous Nancy’s Unhinged Meltdown’ [PICTURES] On Wednesday, after a contentious meeting at the White House with Democratic leaders, President Donald J. Trump blasted out tweets which were highly critical of House Speaker Nancy Pelosi (D-Cali.) and other leaders. “The Do Nothing Democrats, Pelosi and Schumer stormed out of the Cabinet Room!” Trump tweeted along with a picture of a row of empty chairs at a meeting table. According to Democratic leaders Pelosi, Sen.

According to Chuck Schumer, Trump “was insulting, particularly to the speaker.” However GOP house leader Kevin McCarthy defended Trump, and blasted Democrat leadership for leaving the meeting early. House Rebukes Trump Over Withdrawal of U.S. Forces from Syria. DEMOCRATS CUT MIC Of Rep. Steve Scalise During Question To Speaker Pelosi About “Sham” Impeachment Inquiry. On Monday, Rep. Matt Gaetz (R-FL) stunned Americans when he revealed that he was being blocked from entering secret impeachment meetings with Democrat Chairman of the Judiciary Committee Adam Schiff (CA) and Speaker of the House Nancy Pelosi (D-CA).

“The American people should be asking, ‘Why does Nancy Pelosi enact a system that provides less due process for President Trump than Republicans provided for President Clinton?” Rep. Gaetz said. Rep. At the conclusion of his interview, Rep. Watch: Adam Schiff: Another Democrat Lying Skank. This lying skank makes Blasey-Ford look credible. I have a question for scumbag Leftists. How long do you think Adam Schiff believes he can continue his damned and dogged pursuit of an innocent man? Didn’t Schiff promise to provide evidence of Donald Trump’s collusion with the Russians? And while Schiff believes we forgot about his declaration, he now moves to this Ukraine nonsense? Take our poll - story continues below Completing this poll grants you access to The Black Sphere updates free of charge.

GOP Rep. Ralph Abraham introduces resolution to expel Nancy Pelosi from House. Democratic congresswoman secretly sending staff into Mexico to coach asylum-seekers. Florida Democrat says those 'making fun' of members of Congress online should be 'prosecuted' Democrat Rep. Democrat Congressman Wants 'Taxpayer-Funded Dorms' Democratic members of Congress want taxpayers to subsidize their housing, signing onto legislation that would allow them to deduct living expenses for members of the House of Representatives. Rep. Bennie Thompson (D., Miss.) introduced a bill that would ban members of Congress from sleeping in their offices and would change the tax code to allow House members to deduct their spending on housing in D.C. up to $3,000. The deduction would not apply to senators. Reparations bill gains traction in the House.