ALERT: Obama Welfare Leech Drops Receipt In Parking Lot, Internet ERUPTS At What It Exposes... Well now, it seems as if we have a big problem when it comes to Obama’s WELFARE LEECHES. 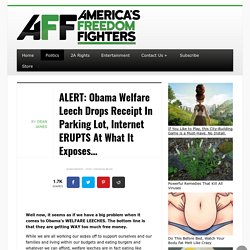 The bottom line is that they are getting WAY too much free money. While we are all working our as$es off to support ourselves and our families and living within our budgets and eating burgers and whatever we can afford, welfare leeches are in fact eating like KINGS. ALERT: Obama Welfare Leech Drops Receipt In Parking Lot, Internet ERUPTS At What It Exposes... I Was Impressed When I Saw The Groceries He Was Buying, But Then He Took Out His Wallet : AWM.

While shopping for his weekly groceries, a man noticed something strange. 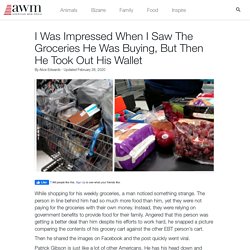 The person in line behind him had so much more food than him, yet they were not paying for the groceries with their own money. Instead, they were relying on government benefits to provide food for their family. Judge LEVELS Welfare Queen Mother Of 16 Who Says: "Somebody Needs To Pay For ALL My Children" [VIDEO] Trump on Social Security: Everything you need to know. Cutting welfare to illegal aliens would pay for Trump’s wall. Mexico won’t have to pay for the wall, after all. 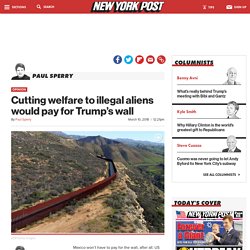 US taxpayers won’t have to pick up the tab, either. The controversial barrier, rather, will cover its own cost just by closing the border to illegal immigrants who tend to go on the federal dole. That’s the finding of recent immigration studies showing the $18 billion wall President Trump plans to build along the southern border will pay for itself by curbing the importation of not only crime and drugs, but poverty.

'We will take a look': Trump to consider entitlement cuts toward end of 2020. President Trump said he will begin considering cuts to entitlement spending "toward the end of the year," putting a politically perilous issue in play for 2020 that he had kept off the table in 2016, when he pledged to leave the programs alone. 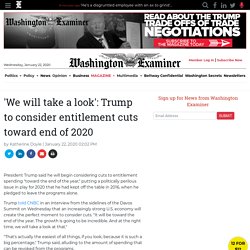 Trump told CNBC in an interview from the sidelines of the Davos Summit on Wednesday that an increasingly strong U.S. economy will create the perfect moment to consider cuts. Fait dÃ©sormais partie dâVerizon Media. If you’re a Democrat who supports “Medicare for All,” pick your poison. 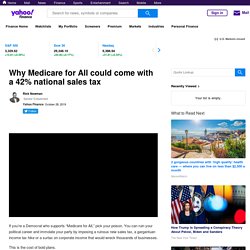 You can ruin your political career and immolate your party by imposing a ruinous new sales tax, a gargantuan income tax hike or a surtax on corporate income that would wreck thousands of businesses. This is the cost of bold plans. Supporters of Medicare for All, the huge, single-payer government health plan backed by Bernie Sanders, Elizabeth Warren and several other Democratic presidential candidates, say it’s time to think big and move to a health plan that covers everyone. Fait dÃ©sormais partie dâVerizon Media. BREAKING: 14 States are Suing the Trump Admin Over Stricter Food Stamp Requirements. 7.7 million fewer Americans are receiving food stamps under President Trump via stricter guidelines and measures created to stop fraudulent abuse. 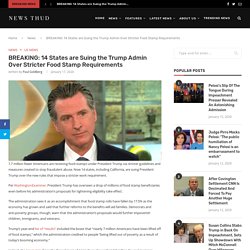 Now 14 states, including California, are suing President Trump over the new rules that impose a stricter work requirement. Per WashingtonExaminer, President Trump has overseen a drop of millions of food stamp beneficiaries even before his administration’s proposals for tightening eligibility take effect. The administration sees it as an accomplishment that food stamp rolls have fallen by 17.5% as the economy has grown and said that further reforms to the benefits will aid families. 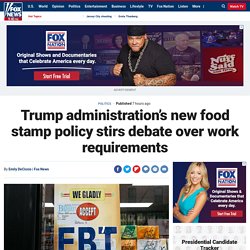 Conservative columnist and author Tom Basile argues policies like these are why President Trump was elected while Coalition on Human Needs Executive Director Deborah Weinstein counters that the latest announcement is just another addition to the Trump administration's unrelenting attack on low-income people in need of food assistance. The Trump administration's proposal to tighten work requirements for food stamp recipients has ignited a debate over benefits for low-income people and cuts to government spending. Judge Rules Taxpayer-Funded Medicaid Must Cover Transgender Surgery in Wisconsin. A federal judge has ruled the taxpayer-funded Medicaid program must cover transgender surgery in Wisconsin. 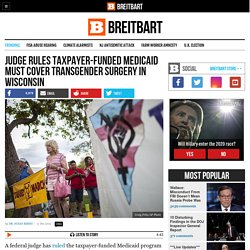 Judge William Conley, of U.S. District Court for the Western District of Wisconsin, an Obama appointee, said a 1997 state regulation that excluded transgender treatments and surgeries from Medicaid coverage violated federal law, including the Affordable Care Act, or Obamacare; the federal Medicaid Act; and the Equal Protection Clause of the Fourteenth Amendment to the U.S. Constitution. A press release at National Health Law Program (NHeLP), which joined with other law firms in the class action lawsuit that challenged the exclusion, noted the state did not appeal the ruling “and has agreed to settle the named plaintiffs’ remaining claims.” 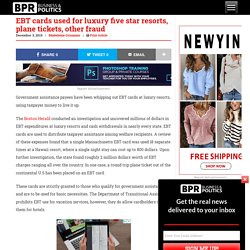 The Boston Herald conducted an investigation and uncovered millions of dollars in EBT expenditures at luxury resorts and cash withdrawals in nearly every state. EBT cards are used to distribute taxpayer assistance among welfare recipients. A review of these expenses found that a single Massachusetts EBT card was used 18 separate times at a Hawaii resort, where a single night stay can cost up to 800 dollars. Upon further investigation, the state found roughly 2 million dollars worth of EBT charges ranging all over the country. Trump’s Stricter Requirements May Take Millions Off Food Stamps, Save $4.2 Billion Annually.

A new study by the Urban Institute has found that stricter work requirements by the Trump administration may take millions off food stamp benefits, saving $4.2 billion annually. 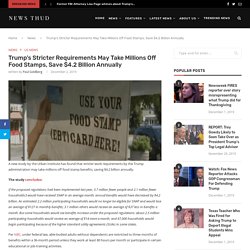 The study concludes: If the proposed regulations had been implemented last year, 3.7 million fewer people and 2.1 million fewer households3 would have received SNAP in an average month; annual benefits would have decreased by $4.2 billion. An estimated 2.2 million participating households would no longer be eligible for SNAP and would lose an average of $127 in monthly benefits; 3.1 million others would receive an average of $37 less in benefits a month. Food stamp enrollment falls to 8-year low as Trump clamps down on fraud, economy improves. Overall enrollment in the country’s food stamp program has dropped to its lowest level in more than eight years as the economy continues to improve and the Trump administration attempts to tackle fraud in the program.

According to the latest statistics from the U.S. Department of Agriculture, which administers the Supplemental Nutrition Assistance Program (SNAP), enrollment in the program dropped in March to 40,083,954. A long train of abuses: Social Security, welfare, and health care. The world's largest Ponzi scheme, Social Security, is sanctioned by the United States government — a program that is, in short, a coercive property transfer from young to old individuals.

Social Security has weakened our social fabric. It transfers moral responsibility from the individual, or family of individuals, to society. Moral responsibility is not a social issue, but an individual one. Trump to close major food stamp loophole. Food Truck Owner Sentenced in $82,000 Food Stamp Fraud Scheme. Paul Carroll and fellow businessman David Sobczyk were convicted of food stamp fraud after they both ran a food truck delivery business that accepted Supplemental Nutrition Assistance Program (SNAP) benefits “on credit,” WHAM reported. Starting in 1991, Carroll began a food truck business in which people would buy items on credit. By doing so, he took down food stamp recipients’ names, SNAP benefits card numbers with the PIN, and Social Security Numbers so he would authorize the purchases on the date the benefits were available on food stamp cards. Sobczyk set up a similar scheme with his food truck delivery business in 2015, allowing SNAP customers to buy items on credit.

The Buffalo News reported that a business associate gave Sobczyk the vehicle to use for the delivery business, and Sobczyk paid him for the vehicle in monthly installments. More than 2.5 Million Households Drop Off Food Stamps Under Trump.