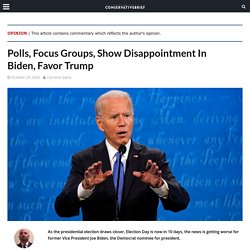 After the last debate between the former vice president and his opponent, President Donald Trump, focus groups and polls have shown a significant shift to the Republican incumbent but, as was the case with a group of undecided voters questioned by CBS News, some of the issues for Biden began before the debate, MRCTV reported.

“The President has been making an issue of the behavior of Joe Biden’s son, Hunter. Is that resonating with anyone?” Anthony Mason, a CBS News reporter, said to the group on Wednesday. WATCH: Obama announces he voted by mail for Joe Biden and Kamala Harris. As election day nears, former President Obama has become more active on social media. 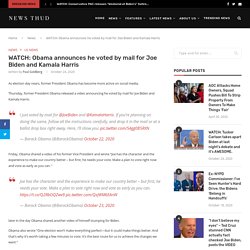 Democratic presidential nominee Joe Biden erroneously claimed the endorsement of one of the most powerful labor unions in Pennsylvania. 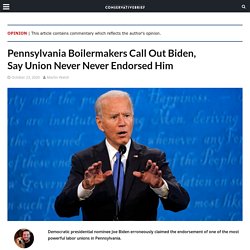 Now, he’s paying for it. Pennsylvania’s Boilermakers Local 154 made it clear that it has in no way endorsed Biden for president, according to The Washington Free Beacon. Juan Williams Publishes Op-Ed Claiming Trump's Planning to Thwart Democracy - Conservative Brief. Another day, another outrageous comment from liberal Fox News host Juan Williams about President Donald Trump. 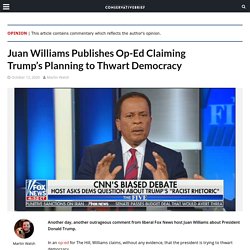 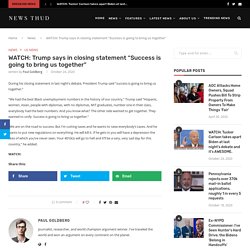 “We had the best Black unemployment numbers in the history of our country,” Trump said “Hispanic, women, Asian, people with diplomas, with no diplomas, MIT graduates, number one in their class, everybody had the best numbers. And you know what? The other side wanted to get together. They wanted to unify. Success is going to bring us together.” “We are on the road to success. SHOW THE CROWD! Media doesn’t want you to see Trump enthusiasm, but RSBN & social show it’s ‘A PHENOMENON’! Trump always says “they never show the crowd” and it’s true. 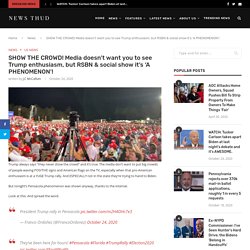 The media don’t want to put big crowds of people waving POSITIVE signs and American flags on the TV, especially when that pro-American enthusiasm is at a YUGE Trump rally. And ESPECIALLY not in the state they’re trying to hand to Biden. But tonight’s Pensacola phenomenon was shown anyway, thanks to the internet. Look at this. And spread the word. Putin Admires Biden's Dems: Their Values Are Closer to Those Communism Originally Came From. 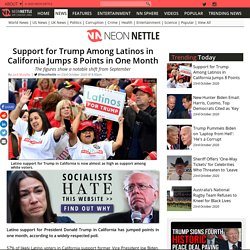 The figures show a notable shift from September, when 64% said they would vote for Biden, and 25% for Trump. Latino support for Trump in California is now almost as high as support among white voters. According to the Sacramento Bee: Charlamagne Tha God: Some Blacks Support Trump Because He’s ‘Actually Talking’ To Them. This week, appearing on CNN with host Don Lemon, “The Breakfast Club” co-host Charlamagne tha God admitted that President Trump is successfully reaching young black voters because he is “actually talking” to them. 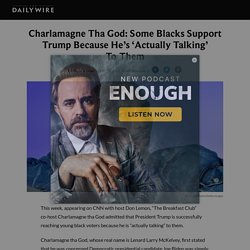 Charlamagne tha God, whose real name is Lenard Larry McKelvey, first stated that he was concerned Democratic presidential candidate Joe Biden was simply offering lip service toward the black community, stating, “You know, I think that, you know, when you look at, you know Joe Biden and his ‘lift every voice’ plan, you know, some of the most important things in it for me, when he speaks on, you know, advancing the economic mobility of black people, and closing the racial income gaps.

But you know, that’s really all lip service, simply because we’re in dream-selling season.” “I think, you know, when it comes to the black people you see who maybe, you know, showing support for Trump, I just think, you know, it’s because Trump is actually talking to young black male voters.” Pat Robertson: Trump Will Win Reelection but the U.S. Will Be 'Torn Apart', War Will Break Out against Israel. CBN’s Pat Robertson said Tuesday he sensed God told him President Trump would win re-election but the country subsequently “will be torn apart” and Muslim countries will declare war on Israel. 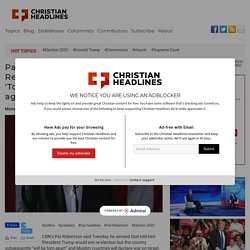 Robertson, speaking on the 700 Club, said he “was praying on Sunday saying, ‘God please tell me how it's gonna happen’” and then sensed he had received a “word” from the Lord. CBN News labeled it a prophecy. Robertson himself said it was “according to what I believe the Lord told me.” “I hope I've got the word, but first of all, I want to say without question, Trump is going to win the election. And that doesn't mean you sit home and don't vote – that means you get out and do everything you can,” Robertson said. 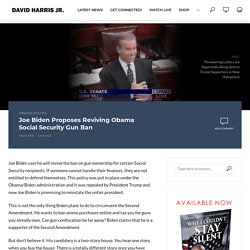 If someone cannot handle their finances, they are not entitled to defend themselves. The 10 Worst Things Joe Biden Has Done in His Political Career - Paste. It’s easy to forget, but Joe Biden used to be a punchline that very few people took seriously as a major political candidate. In 2008, he couldn’t surpass the immortal Bill Richardson in the polls—never exceeding 5% support—and Biden dropped out after the Iowa caucus—the first vote of primary season. Barack Obama single-handedly changed the course of Biden’s career, and after standing next to the most popular politician in America for eight years, Biden has finally gained the mainstream appeal he never was able to assemble on his own, as he officially launched his (doomed) presidential campaign today while leading in tons of polls. Five Quotes From Joe Biden’s Eulogy of Famed Republican Racist Strom Thurmond - Paste.

If you think my title is harsh, take it up with the New York Times, who practically put “racist” on former Senator Strom Thurmond’s (R-SC) tombstone, titling their eulogy “Strom Thurmond, Foe of Integration, Dies at 100.” The longest filibuster in American history came courtesy of Strom Thurmond, when he ranted for 24 hours and 18 minutes against the supposed Orwellian infringement on American freedom that was the… *checks notes* ...1957 Civil Rights Act. Joe Biden Is Paying the Price of History, and It's About Time - Paste. “I don’t feel responsible for the sins of my father and grandfather. I feel responsible for what the situation is today, for the sins of my own generation. And I’ll be damned if I feel responsible to pay for what happened 300 years ago.”

The 10 Worst Things Joe Biden Has Done in His Political Career - Paste. It’s easy to forget, but Joe Biden used to be a punchline that very few people took seriously as a major political candidate. In 2008, he couldn’t surpass the immortal Bill Richardson in the polls—never exceeding 5% support—and Biden dropped out after the Iowa caucus—the first vote of primary season. Barack Obama single-handedly changed the course of Biden’s career, and after standing next to the most popular politician in America for eight years, Biden has finally gained the mainstream appeal he never was able to assemble on his own, as he officially launched his (doomed) presidential campaign today while leading in tons of polls.

Mark Meadows Puts CBS On Notice, Calls Lesley Stahl “More like an opinion journalist than a real reporter.” White House chief of staff Mark Meadows pushed back against CBS News “60 Minutes” anchor Lesley Stahl saying she came across as an “opinion journalist’ and not a “real reporter.” He said there is a good chance Trump will release the video he has of the now infamous interview before it airs. Trump said yesterday, “I am pleased to inform you that, for the sake of accuracy in reporting, I am considering posting my interview with Lesley Stahl of 60 Minutes, PRIOR TO AIRTIME! This will be done so that everybody can get a glimpse of what a FAKE and BIASED interview is all about.” From Fox News: “He didn’t walk out. … He spent over 45 minutes with Lesley Stahl,” Meadows told FOX Business’ “Mornings with Maria” in response to reports that the president had stormed out of the meeting.

He continued: “Journalism should have standards, and we need to get to the bottom of it, so I think the American people will be able to see it.” Biden raises eyebrows with remark contrasting African American, Latino diversity. American Anti-Trump Group Helped Iranian Election Interference Go Viral. On 23rd October 2020 @ 12.00am © press. Trump Mocks Obama for Predicting He Would Never Be President. On 22nd October 2020 @ 9.00pm © press. Trump Targeted by Election Interference from Iran & Russia, Intel Officials Warn. On 22nd October 2020 @ 7.00pm © press Iran and Russia are running campaigns to interfere in the coming U.S. presidential election by trying to sway voters away from President Donald Trump, senior intelligence officials have revealed. During a surprise press conference on Wednesday, Director of National Intelligence John Ratcliffe stated that Iranian and Russian agents have obtained American voter registration information.

He said the info can be used “to attempt to communicate false information to registered voters that they hope will cause confusion, sow chaos, and undermine your confidence in American democracy.” Obama Attacks Trump as a 'Crazy Uncle' Who Tells a 'Lie Every Day' On 22nd October 2020 @ 1.00pm. Joni Ernst’s Dem opponent under investigation for campaign finance violations after watchdog goes undercover. Get the latest BPR news delivered free to your inbox daily. SIGN UP HERE. Future president Joe giving out stats.

Damning Video Appears To Show Just How Much Trouble the Biden/Harris Campaign Could Be In. Hunter Biden's ex-partner to be Trump's debate guest. Joe's Flip-Flops On Masks Mandate: First, National Mask Mandate. Then No, Would Be Unconstitutional. Now Yes, "From Executive Standpoint". What? Kamala Harris MURDER Scandal Revealed… She’s DONE - Quick News Updates. Trump Mocks Obama for Predicting He Would Never Be President. BREAKING: Trump Will Reportedly Surprise Americans With Details of New Middle-Class Tax Cuts During Debate. Joe Biden Just Tweeted This Disgraceful Message: "America was an idea...We've never lived up to it but we've never walked away from it before" Biden Forced to Admit Lie He Has Been Telling on Campaign Trail - Right Wing News Hour. Joni Ernst’s Dem opponent under investigation for campaign finance violations after watchdog goes undercover. WATCH: Obama defends Obamacare, says "our proud reputation around the world is in tatters"

Three Red Banners. WATCH: Obama uses bullhorn, tells Biden volunteers "work as hard as you can" Donald Whips Out His 2020 'Trump Card' - In Critical Swing States, Republicans Are Seeing A Voter Registration Spike. BREAKING: Mitt Romney Did Not Vote For Trump in 2020. Charlamagne tha God Admits He Understands Why Black People Are Voting Trump. HUGE! VP of Flint, MI City Council Endorses Trump: "Mr. Trump would be the best thing for poor folks" Obama Did Nothing For Us..."Sec. of State Ben Carson brought over $30 million to the city of Flint" [VIDEO]

Man charged with threatening to kidnap, kill Biden and Kamala Harris. McConnell leads his Democrat Senate challenger by 9% in new Mason-Dixon poll. 'Bunch of grifters': Ronald Reagan's son criticizes Trump family for 'mixing business with statecraft' President Trump Speaks Out on Joe Biden's Absence from the Campaign Trail: "I think he’s imploding, you look at all that corruption in his family, tremendous corruption”

Singer and Trump supporter fires back at critics "I’m not your enemy because I put my faith in a different candidate than you" VIDEO: "Mr. Biden, What Flavor (Ice Cream) Did You Get?" Lara Trump Destroys CNN Hack Jake Tapper As He Attempts To Shame Her On TV For "Mocking" Joe Biden's Stutter [VIDEO] Hillary Clinton Tells Voters to 'Cancel' Trump 'Reality Show' in November Election. John Kerry attacks Trump over his dancing "And you people called ME Lurch?!?" Trump Hosts Two Rallies In Two States While Biden Hides In Basement From Media After Explosive Emails Allegedly From Hunter Biden's Hard Drive Were Revealed.

Come On MAN! Biden Takes Another Day Off As Campaign Manager Tells Supporters Not to Be Complacent, Joe Doesn't Have A Double-Digit Lead. Joe Biden Vows Muslims Will Serve at Every Level of Administration - TRENDINGRIGHTWING. Trump Rally Crowd Chants "Lock Him Up!" After President Rips Biden. "Fact Checkers" Appear to Protect Biden. Report He Did Not Call Young Black Men “Super Predators”. Fail to report Joe DID Call Young Black Men, “Predators" Fearful residents planning to flee NYC on Election Day. What the heck was that? Profane pro-Biden commercial offensive and confusing, but fun to mock.