Watch: Massive Islamic Rally Held at Vikings’ USBank Stadium — Chanting “Allahu Akbar” - The Beltway Report. ICYMI| Opinion| The state of Minnesota has become the home base of a large percentage of the Islamic immigrants coming to the United States. 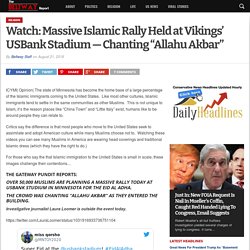 Like most other cultures, Islamic immigrants tend to settle in the same communities as other Muslims. This is not unique to Islam, it’s the reason places like “China Town” and “Little Italy” exist, humans like to be around people they can relate to. Critics say the difference is that most people who move to the United States seek to assimilate and adopt American culture while many Muslims choose not to.

Watching these videos you can see many Muslims in America are wearing head coverings and traditional Islamic dress (which they have the right to do.) For those who say the that Islamic immigration to the United States is small in scale, these images challenge their contentions… The Gateway Pundit Reports: Over 50,000 Muslims are planning a massive rally today at USBank Studium in Minnesota for the Eid Al Adha. How do these videos make you feel?

Did Rep. Ilhan Omar Call America ‘SATAN’ While Insulting American Soldiers Who Saved Her Family? It Sure Seems Like It. - The Beltway Report. Congresswoman Ilhan Omar’s un-American comments and her proclivity to insult American military troops just went to 11 on the BS Meter. 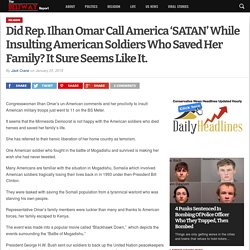 It seems that the Minnesota Democrat is not happy with the American soldiers who died heroes and saved her family’s life. She has referred to their heroic liberation of her home country as terrorism. One American soldier who fought in the battle of Mogadishu and survived is making her wish she had never tweeted. Many Americans are familiar with the situation in Mogadishu, Somalia which involved American soldiers tragically losing their lives back in in 1993 under then-President Bill Clinton. They were tasked with saving the Somali population from a tyrannical warlord who was starving his own people. Representative Omar’s family members were luckier than many and thanks to American forces, her family escaped to Kenya. Dangerously Radical Congresswoman Uncloaks, Demands We Strip America's Defenses, Defund DHS - The Beltway Report. Ultra liberal Minnesota Congresswoman Ilhan Omar has made it very clear that protecting our country from foreign invaders, terrorists, etc is not so high on her priorities. 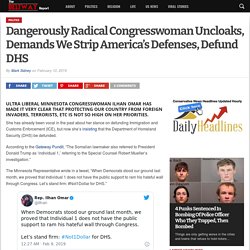 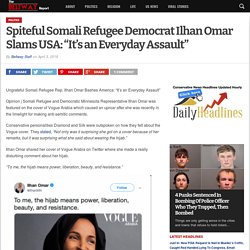 Ilhan Omar Bashes America: “It’s an Everyday Assault” Opinion | Somali Refugee and Democratic Minnesota Representative Ilhan Omar was featured on the cover of Vogue Arabia which caused an uproar after she was recently in the limelight for making anti-semitic comments. Conservative personalities Diamond and Silk were outspoken on how they felt about the Vogue cover. They stated, “Not only was it surprising she got on a cover because of her remarks, but it was surprising what she said about wearing the hijab.” Ilhan Omar shared her cover of Vogue Arabia on Twitter where she made a really disturbing comment about her hijab. “To me, the hijab means power, liberation, beauty, and resistance.” “Power, liberation, beauty, and resistance,” isn’t the way most people would describe a hijab, given the known history of countries like Iran.

Many women are forced to wear these “liberating” hijabs and could be arrested for not wearing one. Pelosi Demands Trump Give In To Ilhan Omar Regarding Sickening 9/11 Statement - The Beltway Report. Nancy Pelosi Demands President Trump Remove A Viral Twitter Video about Ilhan Omar’s 9/11 comments. 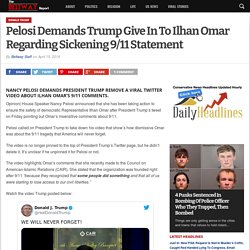 British Imam: Muslims Can Take Sex Slaves And Have Their Way With Them Once The War Comes, And It's Coming - The Beltway Report. Let me preface this opinion article by noting that this is not in any way a broad-brushed condemnation of Islam as a whole. 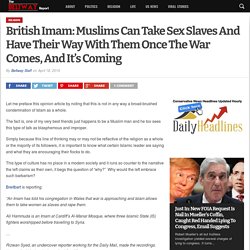 The fact is, one of my very best friends just happens to be a Muslim man and he too sees this type of talk as blasphemous and improper. Simply because this line of thinking may or may not be reflective of the religion as a whole or the majority of its followers, it is important to know what certain Islamic leader are saying and what they are encouraging their flocks to do. This type of culture has no place in a modern society and it runs so counter to the narrative the left claims as their own, it begs the question of “why?” Why would the left embrace such barbarism? Breitbart is reporting: Obama & Hillary Snub Christians After Easter Bombings Kill Over 200, Refuse To Call Victims "Christians" - The Beltway Report. Rather than calling the victims “Christians,” they called them “Easter worshippers,” according to the Washington Times. 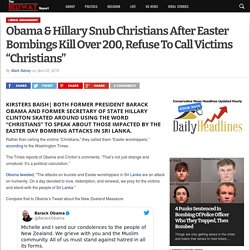 The Times reports of Obama and Clinton’s comments, “That’s not just strange and unnatural. It’s a political calculation.” Obama tweeted, “The attacks on tourists and Easter worshippers in Sri Lanka are an attack on humanity. On a day devoted to love, redemption, and renewal, we pray for the victims and stand with the people of Sri Lanka.” Compare that to Obama’s Tweet about the New Zealand Massacre: Hillary Clinton wrote, “On this holy weekend for many faiths, we must stand united against hatred and violence. Pelosi Gets Major Blowback For Inviting Imam Who Compared Israel To Nazis To "Pray" Before Congress - The Beltway Report. Speaker of the House Nancy Pelosi was brutally chastised by Congressman Lee Zeldin (R-N.Y.) for inviting a “radical imam” to pray before Congress last week. 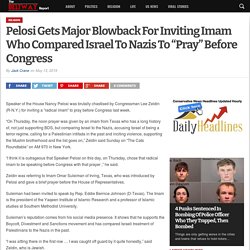 “On Thursday, the noon prayer was given by an imam from Texas who has a long history of, not just supporting BDS, but comparing Israel to the Nazis, accusing Israel of being a terror regime, calling for a Palestinian intifada in the past and inciting violence, supporting the Muslim brotherhood and the list goes on,” Zeldin said Sunday on “The Cats Roundtable” on AM 970 in New York. Tlaib Says She Needs To Speak To Americans "Racist Idiots At Fourth Grade Level" - The Beltway Report. 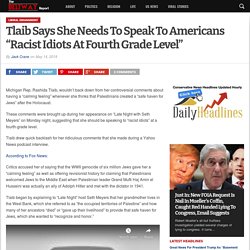 Rashida Tlaib, wouldn’t back down from her controversial comments about having a “calming feeling” whenever she thinks that Palestinians created a “safe haven for Jews” after the Holocaust. These comments were brought up during her appearance on “Late Night with Seth Meyers” on Monday night, suggesting that she should be speaking to “racist idiots” at a fourth-grade level. Tlaib drew quick backlash for her ridiculous comments that she made during a Yahoo News podcast interview. According to Fox News: Ilhan Omar Vows To Take On White Nationalism, Infers Trump Is To Blame - The Beltway Report. Opinion | Jack Crane – Democrat Representatives Ilhan Omar (MN) and Jan Schakowsky (IL), spoke out in an Op-Ed published by CNN, about he need for Americans to push back against what they call the threat of white nationalist violence. 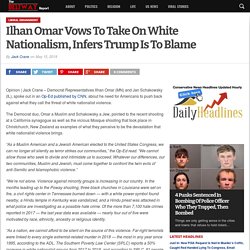 The Democrat duo, Omar a Muslim and Schakowsky a Jew, pointed to the recent shooting at a California synagogue as well as the vicious Mosque shooting that took place in Christchurch, New Zealand as examples of what they perceive to be the devastation that white nationalist violence brings. “As a Muslim American and a Jewish American elected to the United States Congress, we can no longer sit silently as terror strikes our communities,” the Op-Ed read. Gingrich: Kamala Harris Is an ‘Openly Anti-Catholic Bigot’ Former speaker of the House Newt Gingrich said Friday that Sen. Kamala Harris is “the most openly anti-Catholic bigot to be on a national ticket in modern times.” Citing Harris’s public record of anti-Catholic activism, Gingrich writes that her bigotry against Catholics is “a perfect example of the modern radical left’s ideology of ‘intolerant tolerance.’”

“She is openly anti-Catholic in confirming federal judges, wanting to prosecute the Little Sisters of the Poor, closing Catholic Hospitals who don’t join her union allies, and favoring tax paid abortion up until birth,” Gingrich states. Watch: Susan Rice Wants To Cancel Secretary of State Pompeo Over Church…Imagine If They Said This About A Muslim. The former Obama administration national security adviser Susan Rice – the vanguard of Obamagate – wants to cancel Secretary of State Mike Pompeo because he’s “overtly religious.” “Mike Pompeo has been an overtly religious secretary of state, which in itself is problematic, because, again, he’s supposed to represent all of America, all of our religions, all of our threads,” she said in an interview on MSNBC.

Those on the Left have constantly criticized members of the Trump administration that are Christians. In 2017, Senator Bernie Sanders opposed the Office of Management and Budget nominee Russell Vought because he held Evangelical beliefs. Joe Biden’s running mate Kamala Harris tore into a US District Court nominee over his involvement with a Catholic charitable organization. The Constitution defends those that hold public office to the right to exercise their religious beliefs freely while they serve. Could you imagine if Susan Rice said that Rep.