Bolton Tells Susan Rice His Testimony Would Have Made No Difference in the Impeachment Outcome. Earlier this month, lead impeachment manager Adam Schiff, during appearances on CNN and MSNBC made it clear he’s not happy with John Bolton for rejecting an offer to submit a sworn affidavit to the house. 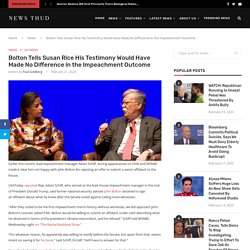 USAToday reported Rep. Adam Schiff, who served as the lead House impeachment manager in the trial of President Donald Trump, said former national security adviser John Bolton declined to sign an affidavit about what he knew after the Senate voted against calling more witnesses. “After they voted to be the first impeachment trial in history without witnesses, we did approach John Bolton’s counsel, asked if Mr. Bolton would be willing to submit an affidavit under oath describing what he observed in terms of the president’s Ukraine misconduct, and he refused,” Schiff told MSNBC Wednesday night on “The Rachel Maddow Show.” “For whatever reason, he apparently was willing to testify before the Senate, but apart from that, seems intent on saving it for his book,” said Schiff, D-Calif. Democrats’ once-wishful hero slams House impeachment process as ‘grossly partisan’ Former National Security Adviser John Bolton slammed the Democrats’ impeachment process of President Trump as “grossly partisan” and claimed his own potential testimony “would have made no difference to the ultimate outcome.” 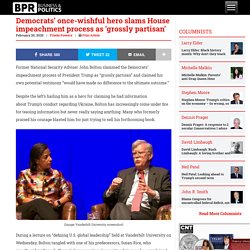 Despite the left’s hailing him as a hero for claiming he had information about Trump’s conduct regarding Ukraine, Bolton has increasingly come under fire for teasing information but never really saying anything. Many who formerly praised his courage blasted him for just trying to sell his forthcoming book. During a lecture on “defining U.S. global leadership” held at Vanderbilt University on Wednesday, Bolton tangled with one of his predecessors, Susan Rice, who was President Barack Obama’s former national security adviser, as he complained that the House “committed impeachment malpractice,” according to the Associated Press. John Bolton Speaks Out, Blasts Democrats’ Impeachment Of Trump As ‘Grossly Partisan’ Former National Security Adviser John Bolton finally spoke out this week, slamming Democrats for their “grossly partisan” impeachment effort against President Donald Trump. 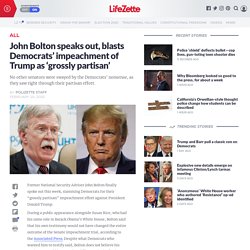 During a public appearance alongside Susan Rice, who had his same role in Barack Obama’s White House, Bolton said that his own testimony would not have changed the entire outcome of the Senate impeachment trial, according to the Associated Press. Despite what Democrats who wanted him to testify said, Bolton does not believe his testimony would have made a difference in the final impeachment vote. “People can argue about what I should have said and what I should have done,” Bolton said. “I would bet you a dollar right here and now, my testimony would have made no difference to the ultimate outcome.” He also said that the way Democrats handled the impeachment trial “drove Republicans who might have voted for impeachment away because it was so partisan.”

MORE NEWS: The five best presidents in American history. Bolton: 'My testimony would have made no difference' in 'partisan' impeachment process. Former national security adviser John Bolton argued that President Trump would have been acquitted in the Senate's impeachment trial even if he had testified in front of the chamber. 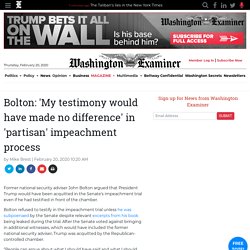 Bolton refused to testify in the impeachment trial unless he was subpoenaed by the Senate despite relevant excerpts from his book being leaked during the trial. After the Senate voted against bringing in additional witnesses, which would have included the former national security adviser, Trump was acquitted by the Republican-controlled chamber. “People can argue about what I should have said and what I should have done,” Bolton said at an event with Susan Rice, another former national security adviser, at Vanderbilt University on Wednesday, according to the Associated Press. “I would bet you a dollar right here and now, my testimony would have made no difference to the ultimate outcome.” Democrats’ once-wishful hero slams House impeachment process as ‘grossly partisan’ 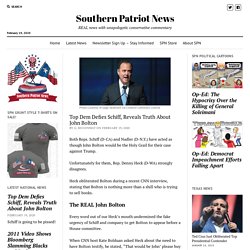 Schiff (D-CA) and Nadler (D-N.Y.) have acted as though John Bolton would be the Holy Grail for their case against Trump. Unfortunately for them, Rep. Denny Heck (D-WA) strongly disagrees. Bolton Latest Stunt During Appearance Is Behavior That Obama Would Be Proud. Former National Security Advisor John Bolton is something else and during his first public appearance since the impeachment trial of President Trump he engaged in behavior that only former President Obama would be proud of. 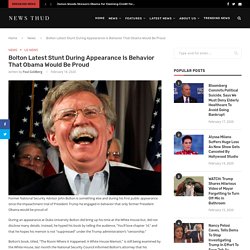 During an appearance at Duke University Bolton did bring up his time at the White House but, did not disclose many details. Instead, he hyped his book by telling the audience, “You’ll love chapter 14,” and that he hopes his memoir is not “suppressed” under the Trump administration’s “censorship.” Bolton’s book, titled, “The Room Where It Happened: A White House Memoir,” is still being examined by the White House, last month the National Security Council informed Bolton’s attorney that his manuscript “appears to contain significant amounts of classified information that must be removed.”

WATCH: Schiff Not Happy Bolton Rejected Offer To Submit Sworn Affidavit to House. Lead impeachment manager Adam Schiff, during appearances on CNN and MSNBC made it clear he’s not happy with John Bolton for rejecting an offer to submit a sworn affidavit to the house. 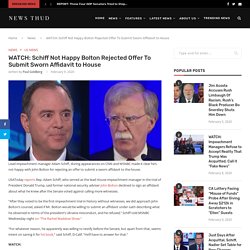 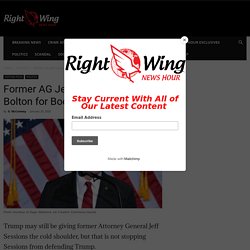 On Tuesday, Sessions tore into Bolton for violating the sanctity of these confidential relationships as well as blasting the Dems for the impeachment. Still Standing by Trump Sessions recently announced that he was going to make a run to regain the Senate seat he gave up when he took on the role of Attorney General. Ever since he made the announcement, he has been trying to mend fences with Trump, even though Trump continues to ignore his efforts. Trump is still extremely upset Sessions recused himself from the Russian collusion investigation. Even so, while Trump is still not on speaking terms with Sessions, he did say that he would do nothing to rail against Sessions during his run… not exactly an endorsement, but it is a start.

Bette Midler Promises to Buy $100k of Bolton’s Books, Demands he go on TV "NOW!" Moments ago, Anti-Trump performer Bette Midler had an unusual reaction to the Senate motion to call witnesses failing. 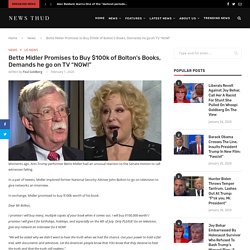 In a pair of tweets, Midler implored former National Security Adviser John Bolton to go on television to give networks an interview. In exchange, Midler promised to buy $100k worth of his book. Dear Mr Bolton, I promise I will buy many, multiple copies of your book when it comes out. I will buy $100,000 worth! Hours before impeachment vote, another damning leak from Bolton's book. Hours before the impeachment vote, John Bolton released another leak via the NY Times. 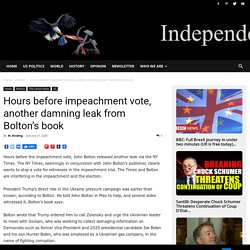 The NY Times, seemingly in conjunction with John Bolton’s publisher, clearly wants to stop a vote for witnesses in the impeachment trial. The Times and Bolton are interfering in the impeachment and the election. Trump denies asking Bolton to put Zelensky and Giuliani in contact. Before Bolton Wrote About Trump, Schiff Thrashed Him for 'Lack of Credibility' "Game Over!" Trump Tweets Video of Bolton Discussing "Warm and Cordial" Calls With Ukraine's President. President Trump just tweeted out a video of former national security adviser John Bolton discussing the call with the newly elected Ukrainian President.

His description of the call is that it was “warm and cordial. ” Nothing in Bolton’s comments about the call indicates a problem. He says, “dealing with corruption is a high priority.” Wouldn’t dealing with corruption include dealing with the Biden corruption? Trending: Biden Grabs Voter By The Jacket…Pokes Him in the Chest…Tells Him He’s Not Going to “Treat Him Right” In the video below, former Obama VP Joe Biden arrogantly describes how he rigged the judicial system of Ukraine by threatening to withhold one billion dollars if a prosecutor wasn’t fired: I was—not I, but it just happened to be that was the assignment I got. “So they said they had—they were walking out to a press conference. “I said, I’m telling you, you’re not getting the billion dollars. This is just the tip of the iceberg on Biden. "Game Over!" Trump Tweets Video of Bolton Discussing "Warm and Cordial" Calls With Ukraine's President. 'GAME OVER,' Trump declares, as old Bolton, Schiff videos surface amid impeachment trial.

A string of newly resurfaced video clips of former national security adviser John Bolton spurred President Trump and his supporters Wednesday to highlight what they described as serious credibility questions -- raised by both Democrats and Republicans -- amid the Senate impeachment trial, as the president tweeted, "GAME OVER! " In his tweet, Trump linked to an interview of Bolton in August 2019 where he discusses Ukraine policy. In the Radio Free Europe/Radio Liberty interview clip, Bolton made no mention of any illicit quid pro quo, and acknowledged, as Republicans have claimed, that combating "corruption" in Ukraine was a "high priority" for the Trump administration.

Trump told Bolton in August, according to a transcript of Bolton’s forthcoming book reviewed by The Times, “that he wanted to continue freezing $391 million in security assistance to Ukraine until officials there helped with investigations into Democrats, including the Bidens.” The report prompted new calls for Bolton to testify in the Senate impeachment trial, including from several Republicans.

During a discussion on “The Five” Jesse Watters explained why he believes the Bolton leak to the NY Times is a “hatchet job.” Jesse Watters: George W. Bush Called John Bolton ‘Not Credible’ In 2008: “I Don’t Consider Bolton Credible” Huckabee Comes Out Swinging with ZINGER Against NYT. Below is a report that DML News gives a 4 OUT OF 4 STARS trustworthiness rating. We base this rating on the following criteria: Provides named sources Reported by more than one notable outlet Does not insert opinion or leading words Includes supporting video, direct statements, or photos Click here to read more about our rating system. As the most reliable and balanced news aggregation service on the internet, DML News App offers the following information published by DAILYCALLER.COM:

Mulvany weighs in on Bolton's publicity stunt, NY Times-coordinated book launch. Impeachment defense, Day Two: The Bolton brouhaha. It was entirely predictable that the Trump impeachment trial would feature a January surprise, and now it has arrived. It came in the form of a New York Times report that former national security adviser John Bolton, in a new book, writes that the president told him that he "wanted to continue freezing $391 million in security assistance to Ukraine until officials there helped with investigations into Democrats, including the Bidens.

" The words are from the New York Times, not Bolton. Neither the report nor any other has quoted even a word from the Bolton book. The news jolted the impeachment trial on the second day of the Trump defense, and it gave rise to a dizzying number of questions and scenarios. BREAKING: Rand Paul Accuses Bolton of Using Leak to "Make a Lot More Money"