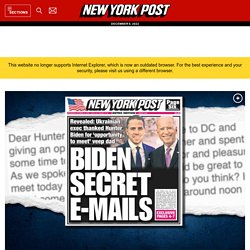 CBS News' 60 Minutes Spiked Story on Osama bin Laden in Iran; White House Feared Story Could DESTROY Obama's Re-Election. CBS News had a chance to deliver a truly incredible story to the American public, but its flagship news program 60 Minutes balked after Barack Obama’s White House intervened, according to shocking details in the new Deep State book PAINE: How We Dismantled the FBI in Our Pajamas. 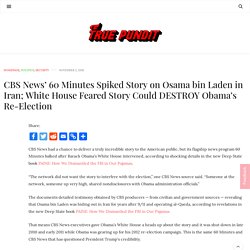 “The network did not want the story to interfere with the election,” one CBS News source said. “Someone at the network, someone up very high, shared nondisclosures with Obama administration officials.” The documents detailed testimony obtained by CBS producers — from civilian and government sources — revealing that Osama bin Laden was hiding out in Iran for years after 9/11 and operating al-Qaeda, according to revelations in the new Deep State book PAINE: How We Dismantled the FBI in Our Pajamas. That means CBS News executives gave Obama’s White House a heads up about the story and it was shut down in late 2010 and early 2011 while Obama was gearing up for his 2012 re-election campaign.

Benghazi Scandal & Arming Syrian ‘Rebels’ Looking ahead to the next installment of e-mails from WikiLeaks As U.S. armed forces attack ISIS in Libya, WikiLeaks is poised to remind us that ISIS is in Libya — indeed, that ISIS is ISIS — thanks to disastrous policies championed by Hillary Clinton as President Obama’s secretary of state. 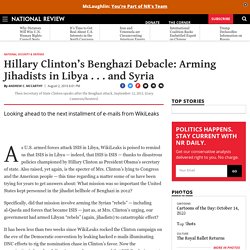 Also raised, yet again, is the specter of Mrs. Clinton’s lying to Congress and the American people — this time regarding a matter some of us have been trying for years to get answers about: What mission was so important the United States kept personnel in the jihadist hellhole of Benghazi in 2012? Specifically, did that mission involve arming the Syrian “rebels” — including al-Qaeda and forces that became ISIS — just as, at Mrs. Clinton’s urging, our government had armed Libyan “rebels” (again, jihadists) to catastrophic effect? Benghazi Ain’t Going Away.

Almost every day for the last several years, I have tweeted “Benghazi ain’t going away” on my Twitter page. 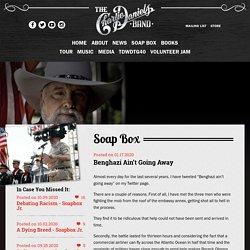 There are a couple of reasons. First of all, I have met the three men who were fighting the mob from the roof of the embassy annex, getting shot all to hell in the process. They find it to be ridiculous that help could not have been sent and arrived in time. Secondly, the battle lasted for thirteen hours and considering the fact that a commercial airliner can fly across the Atlantic Ocean in half that time and the proximity of military bases close enough to send help makes Barack Obama and Hillary Clinton one of two things, either the two stupidest, most inept people whoever became President of the United States and Secretary of State or downright bald-faced liars. 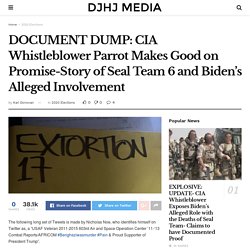 This is his Twitter account: Noe is the advocate for Allan Harrow Parrot, a former CIA agent, turned CIA Whistleblower, who sought out Parrot, and recently made a video with Charles Woods, the father of TY Woods, who was killed at the Benghazi compound in Libya. In the video Parrot made promises to release to Woods shocking documents, audio and video to prove that Joe Biden was involved in shocking crimes and betrayal, along with Hillary Clinton, John Brennan, Leon Panetta and Bill Richardson involving the death of Osama Bin Laden and Seal Team 6. DJHJ Media covered the original video in an article that was tweeted by President Donald Trump and Noe. EXPLOSIVE: UPDATE- CIA Whistleblower Exposes Biden's Alleged Role with the Deaths of Seal Team- Claims to have Documented Proof. BREAKING: In this article is a full interview of a CIA Whistleblower, Allan Harrow Parrot, who is being interviewed by Charles Woods and Nicholas Noe. 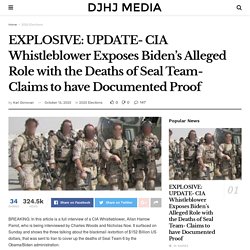 It surfaced on Sunday and shows the three talking about the blackmail /extortion of $152 Billion US dollars, that was sent to Iran to cover up the deaths of Seal Team 6 by the Obama/Biden administration. Parrot, a former CIA agent, has extensive experience with the intelligence community, and he is planning on releasing documents this week on what he said are going to uncover “numerous crimes sprees”. DOCUMENT DUMP: CIA Whistleblower Parrot Makes Good on Promise-Story of Seal Team 6 and Biden's Alleged Involvement. Thread by @scienceismymuse on Thread Reader App – Thread Reader App. Obama 'Put a Target on Their Backs', SEAL Team 6 Family Members Say.