Building Social Software for the Anti-Social. In November, I delivered the keynote presentation at Øredev 2011. 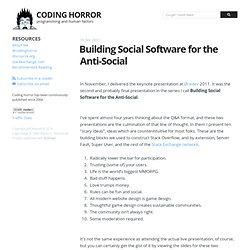 It was the second and probably final presentation in the series I call Building Social Software for the Anti-Social. I've spent almost four years thinking about the Q&A format, and these two presentations are the culmination of that line of thought. In them I present ten "scary ideas", ideas which are counterintuitive for most folks. The Ultimate Code Kata. As I was paging through Steve Yegge's voluminous body of work recently, I was struck by a 2005 entry on practicing programming: Contrary to what you might believe, merely doing your job every day doesn't qualify as real practice. 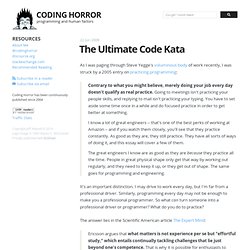 Going to meetings isn't practicing your people skills, and replying to mail isn't practicing your typing. You have to set aside some time once in a while and do focused practice in order to get better at something. I know a lot of great engineers -- that's one of the best perks of working at Amazon -- and if you watch them closely, you'll see that they practice constantly.

As good as they are, they still practice. It's an important distinction. The answer lies in the Scientific American article The Expert Mind: Ericsson argues that what matters is not experience per se but "effortful study," which entails continually tackling challenges that lie just beyond one's competence. Effortful study means constantly tackling problems at the very edge of your ability.

我心目中的编程高手(完整版) - birdshome. -- Bill Joy MIT BBS上说微软电话面试的一道题就是“Who do you think is the best coder, and why?”。 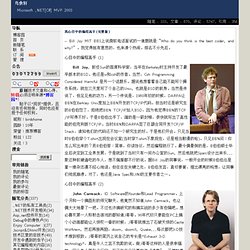 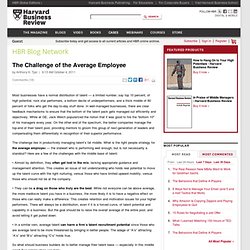 Tjan | 9:13 AM October 4, 2011 Most businesses have a normal distribution of talent — a limited number, say top 10 percent, of high potential, rock star performers, a bottom decile of underperformers, and a thick middle of 80 percent of folks who get the day-to-day stuff done. In well-managed businesses, there are clear feedback mechanisms to ensure that the bottom of the talent pack gets managed out efficiently and objectively.

While at GE, Jack Welch popularized the notion that it was good to fire the “bottom 10″ of his managers every year. On the other end of the spectrum, the better companies manage the top-end of their talent pool, providing mentors to groom this group of next-generation of leaders and compensating them differentially in recognition of their superior performance. The challenge lies in productively managing talent’s fat middle. . • Almost by definition, they often get lost in the mix, lacking appropriate guidance and management attention. » Enough with browsers. We need cars now. ProjectVRM. VRM: The user as point of integration.

On yesterday’s Project VRM conference call, a piece of the Vendor Relationship Management puzzle snapped into alignment in a flash of insight.

It wasn’t something new to the movement, rather it was a realization about the primacy and criticality of what we are doing and how to communicate it. It has always been a part of the conversation, just one that we often took a bit of time to get around to. And yet, it is perhaps the most important piece of all: When we put the user at the center, and make them the point of integration, the entire system becomes simpler, more robust, more scalable, and more useful. This is a profound shift that has some interesting parallels with a concept in AI called “stigmergy” and with a bit of classic Einstein becomes a totally new way to think about next generation systems design. Raising money for StackOverflow. By Joel Spolsky Sunday, February 14, 2010 A few people heard me on This Week in Startups (starting at 15:45) asking Jason if we should take money from the first VC who fell into our laps, or spend time doing the Sand Hill Road rounds, meeting more VCs, and doing a road show for the other firms that might be interested in investing. 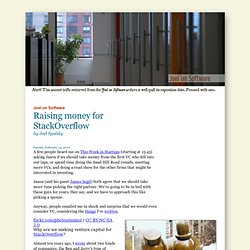 Jason (and his guest James Segil) both agree that we should take more time picking the right partner. We’re going to be in bed with these guys for years, they say, and we have to approach this like picking a spouse. Anyway, people emailed me in shock and surprise that we would even consider VC, considering the things I’ve written. Why are we seeking venture capital for StackOverflow? Why testers? By Joel Spolsky Tuesday, January 26, 2010 My sister got her kids a little puppy, and they’ve been trying to train it. 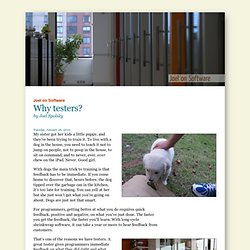 To live with a dog in the house, you need to teach it not to jump on people, not to poop in the house, to sit on command, and to never, ever, ever chew on the iPad. Never. Good girl. With dogs the main trick to training is that feedback has to be immediate. For programmers, getting better at what you do requires quick feedback, positive and negative, on what you’ve just done.